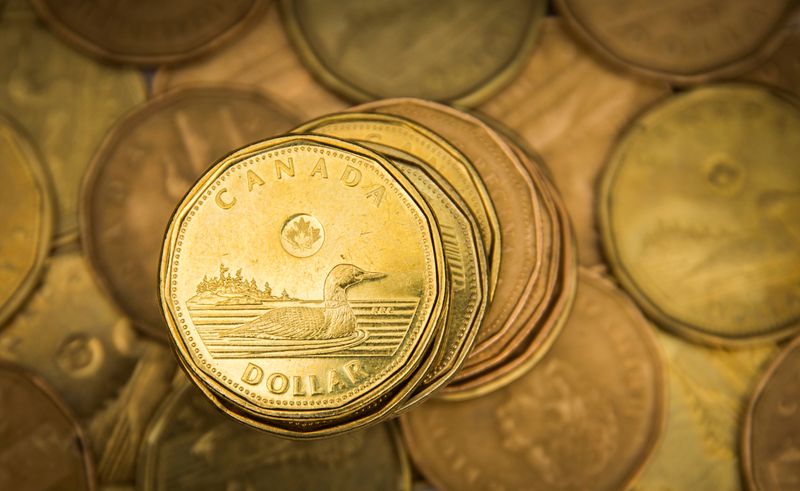 © Reuters. FILE PHOTO: A Canadian dollar coin, commonly known as the "Loonie", is pictured in this illustration picture taken in Toronto

TORONTO (Reuters) – The outlook for the Canadian dollar has improved on expectations the currency will benefit from domestic economic stimulus and the rollout of a COVID-19 vaccine, a Reuters poll showed, with the loonie already gaining in recent months.

"We see several tailwinds for the Canadian dollar," said Stephen Brown, senior Canada economist at Capital Economics. "For a start, we think the consensus is far underestimating the outlook for the Canadian recovery, which we think is poised to outperform many other economies given the much greater policy support provided this year."

On Monday, Canadian Finance Minister Chrystia Freeland forecast the budget deficit hitting an historic C$382 billion ($297 billion) on COVID-19 emergency aid, adding that C$100 billion in stimulus would be rolled out once the virus is under control.

An additional tailwind for the loonie could be higher oil prices, Brown said.

The price of oil, one of Canada's major exports, has soared nearly 30% since the start of November and Wall Street has climbed to a record high on hopes a speedy approval of COVID-19 vaccines would boost global economic growth.

"An improvement in risk appetite will help the loonie rally in 2021 due to the currency's high beta," said Simon Harvey, an FX market analyst at Monex Europe and Monex Canada.

High-beta currencies tend to be more sensitive to changes in risk appetite than the broader market. Canada runs a current account deficit, so it depends on foreign investment, including portfolio flows.

A second wave of the pandemic has led to increasing efforts from Canadian provinces to clamp down on businesses and curb gatherings.

Canada has made deals to buy more vaccine doses per capita than any other nation, and Canadian health authorities could approve Pfizer Inc (NYSE:PFE)'s coronavirus vaccine within the next week, allowing distribution to start in early 2021.

Canada's savings rate has climbed to 14.6% in the third quarter from 2% in the fourth quarter of 2019, which could help boost consumer spending when restrictions ease.

(For other stories from the Reuters foreign exchange poll:)