Zoom Video Communications (NASDAQ:) has had an incredible run during the pandemic. Demand for the company’s digital communications tools boomed amid the COVID-19 blight when millions of workers and students flocked to its video-conferencing service in a global work-from-home environment.

But as economies globally reopen, and vaccinations pick up, many investors believe the best days for Zoom sales are behind us and that going forward, it will revert to business-as-usual. 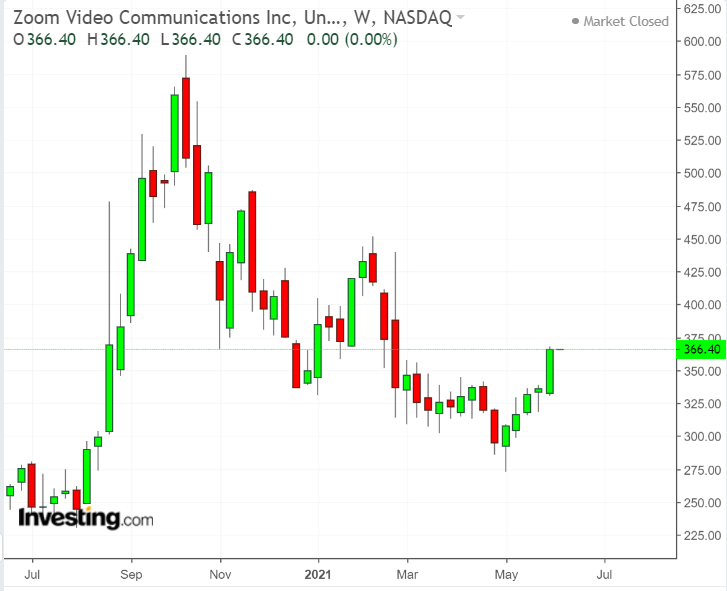 The company’s latest , released early this month, however, show that the San Jose, California-based Zoom has yet not lost its growth momentum. The company gave a sales forecast for the current quarter that topped analysts’ estimates, signaling the company’s ability to retain and add large customers, even as intense demand created by the pandemic eases.

Revenue in the period ending July will climb up to $990 million, topping the $942 million that analysts had projected. Profit, excluding certain items, will be $1.14 to $1.15 a share. Analysts estimated $0.94.

Facing an imminent slowdown once COVID is contained, Chief Executive Officer Eric Yuan is trying to diversify Zoom’s offerings. He has been adding premium products, such as a cloud-based phone system, to appeal to larger corporations, as well as small and mid-sized businesses.

“We are energized to help lead the evolution to hybrid work that allows greater flexibility, productivity, and happiness to both in-person and virtual connections,” Yuan said in the statement.

Some analysts agree with this approach and see a bright future for Zoom, which became a household phenomenon during the pandemic. RBC analyst Rishi Jaluria, while initiating the coverage of Zoom with an outperform rating, said in a note last week that sales will be robust, helped by large business clients.

In the note, Jaluria stated:

“The future of work will likely be hybrid and we believe Zoom will be a critical component to enabling that future. We would argue that hybrid and distributed work is a tougher problem to solve than all employees working remote, as meetings will happen across devices (e.g. laptops, mobile phones, hardware meeting rooms).”

RBC set a price target of $450 per share for Zoom, which is nearly 30% above where the stock closed on Friday. The note adds:

“While we are not dismissive of competition, especially from giants like Microsoft (NASDAQ:) and Google (NASDAQ:), we view Zoom’s video conferencing as being meaningfully differentiated on its reliability, scalability, and ease-of-use. We believe this and the critical nature of video conferencing will be enough to hold off ‘good enough’ competition, particularly from Microsoft Teams.”

Bank of America is another investment bank bullish on Zoom’s post pandemic prospects. In a recent research note, the bank said the company’s stock could soar again this year and erase much of its slide in recent months.

“In our view, Zoom’s superior video experience has solidified its position as the go-to meetings platform post-COVID. As the pandemic lingers and enterprises adopt more flexible workforces, we believe 2021 will be another good year for Zoom,” the note said. Bank of America has a $480 price target for Zoom.

The majority of analysts don’t see Zoom stock going back to its all-time high anytime soon as the pandemic-fueled use of conferencing tools slows down. But there is near consensus that the company has a bright future in the post-COVID world, making its stock a suitable candidate to buy and hold.