When United Parcel Service (NYSE:) released its fiscal earnings report it caused quite a stir. The company reported not only Revenue growth but Revenue growth acceleration and acceleration far above the analysts’ consensus. The actual results beat the consensus by 1000 basis points and were coupled with a substantial amount of earnings leverage to boot. Analyst Brandon Oglenski of Barclays blames the results on the company’s unprecedented pricing power. In his view, that pricing power, supported by record volume demand in e-commerce and shortages within the freight industry, is underappreciated by investors’ and we agree. Now, six weeks later, that narrative may be unwinding but we don’t think so. In our view, it’s far more likely this knee-jerk reaction to news is setting up a great buying opportunity.

UPS released guidance for the fiscal year 2023 ahead of its Investor Day event and sparked another buzz among the analyst. The guidance, while good, was mostly in line with the analysts’ consensus and sent shares moving lower. The takeaway for us, however, is that this guidance assumes sequential growth in both revenue and earnings and is so early in relation to the reporting period we don’t think it really matters. Regardless, UPS is expecting to bring in between $98 billion and $102 billion versus the $99.92 billion expected by the analyst assuming 2-year growth of 5% and sequential growth of 2.2%.

While slowing Revenue growth is not something we want to see we chalk it up to the law of large numbers and choose instead to focus on earnings. The company is expecting to bring in $100 billion and for margins to expand 300 to 400 basis points on an adjusted basis. This should drive earnings growth in the mid to high-single digits compared to low single-digit revenue growth.

The analyst’s response to the guidance and the Investor Day event has been mixed. Morgan Stanley says the day was light on the details around guidance and cost-saving and that was what the market was looking for. Analyst Ravi Shanker maintains the firm’s underweight rating and the price target of $130 while others take on a more bullish stance. This is among the lowest price targets on Wall Street and assumes about a 35% downside from current prices.

JP Morgan analyst Brian Ossenbeck is among the most bullish of the analysts on Wall Street. He boosted the firm’s rating to Overweight and hiked the price Target to The Wall Street high of $243 citing UPS industry-leading pricing power. In his view, the company is well-positioned to expand domestic margins while capitalizing on e-commerce growth and that is great news for investors.

Opinion about the guidance aside, there are a few takeaways for investors to focus on. The first is that this company’s revenue and earnings gains made during the pandemic are sticky. The second is that revenue gains are expected to continue on a year-over-year basis for the next two years at least. The third is that the company is displaying a powerful amount of earnings leverage. The fourth is that this company’s earnings are fueling a market-beating 2% dividend yield and finally, this company trades at a significant discount to the broad market. If you’re looking for a safe, growing, blue-chip dividend-growth stock this is a good choice.

The Technical Outlook: UPS Pulls Back Into A Buying Opportunity

Shares of UPS fell more than 5% in the wake of the guidance and Investor Day event but it already looks like buyers are stepping in to scoop up the bargain. Not only did the candle create a long lower shadow but the market action in the following session has shares up nearly 2% in pre-market trading. Support appears to be at the psychologically important round number of $200 and that is echoed by the stochastic. While momentum remains bearish, stochastic is consistent with support and indicating a moderately strong Buy. Investors looking to get into this stock might want to wait for the price action to break above the short-term EMA before buying. When that happens we expect to see price action retest the recently set all-time high and then move up to set fresh all-time highs. 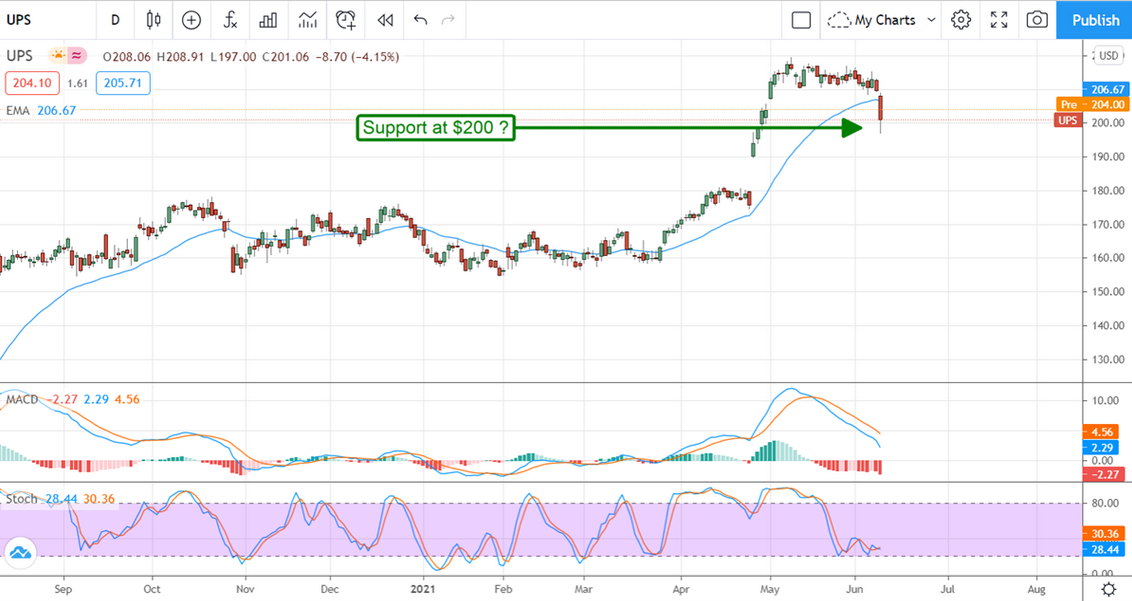