After two disastrous years, Boeing (NYSE:) is slowly regaining lost ground. The shares of this crisis-hit aviation giant have almost tripled since the pandemic-triggered crash in March last year.

Boeing’s gradual rebound comes alongside a broad rally in other cyclical stocks—including airlines, cruise operators and retailers—as investors deployed their cash in areas that are closely tied with the economic reopening, as coronavirus restrictions are lifted. 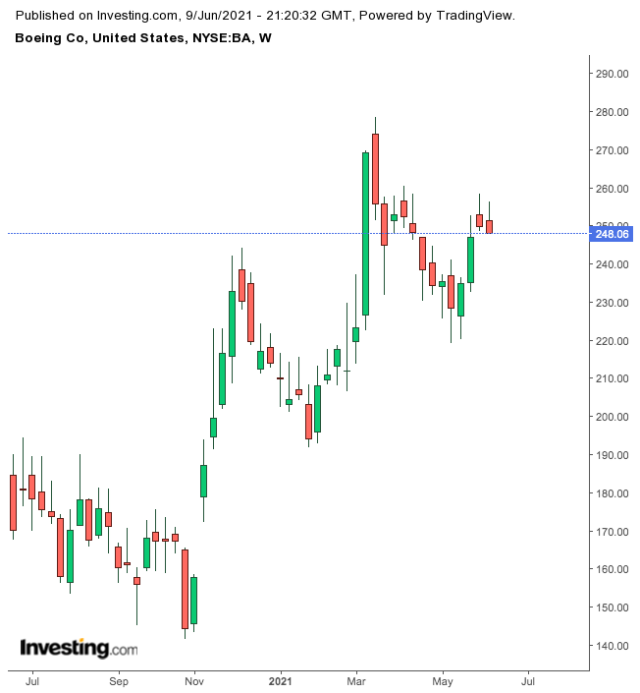 As the recovery in air travel continues at a brisk pace, investors are feeling more comfortable holding the Chicago-based plane-maker in their portfolios. The biggest buy signal is coming from airline traffic.

During the Memorial Day weekend, American airports—from Los Angeles to Houston and Atlanta—reached passenger levels not seen since early March 2020. The number of passengers going through airport checkpoints nationwide on May 28 rose to 2 million for the first time since the weeks before flights were grounded last year, according to Transportation Security Administration data.

Boeing has previously projected a return of passenger traffic to pre-pandemic levels by 2023 or 2024, but Chief Executive Officer David Calhoun said last week that the recovery has been “more robust than I ever imagined.”

Amid this optimism, however, investors shouldn’t overlook the fact that the company is on a long road to recovery after taking a big financial hit from its faulty airplanes and the pandemic. Boeing has burned about $30 billion in cash since regulators grounded the best-selling MAX 737 in March 2019, after two crashes that killed 346 people.

The cash consumed is roughly double what it would cost to create an all-new jetliner from scratch, according to Bloomberg estimates. Executives expect the cash performance to improve over the course of the year, but they don’t predict breaking even until 2022.

Despite this bleak financial picture, some analysts believe Boeing will ultimately come out of this crisis, and that for long-term investors, now is a good time to own its shares.

Cowen analyst Cai von Rumohr, while upgrading Boeing to outperform from market perform, said in a note to clients last week that the recovery in travel demand creates upside for the aerospace giant.

Cowen hiked its price target for Boeing to $290 per share from $240, representing an upside of 16% above where the stock closed on Wednesday.

During the Boeing recorded 76 orders net of cancellations, well ahead of its European rival Airbus Group (OTC:), which had 61 more cancellations than orders. Boeing’s tally included a high-profile deal for 100 737 MAX jets with Southwest Airlines (NYSE:) that helps restore confidence in the beleaguered plane.

Despite this bullish activity in BA shares, the analyst community in general doesn’t see too much upside from here given the airline industry continues to face many challenges in order to fully recover from the global plunge in travel. Of 14 analysts covering the stock, six still have a hold rating with a consensus 12-month price target of about $275 a share.

BA stock is gaining strength as the economy reopens and airlines look to add more aircrafts to their fleets. Given the company’s strategic importance to the economy and the defense sector, its stock continues to be a good long-term bet, even after a gradual recovery of the past one year.