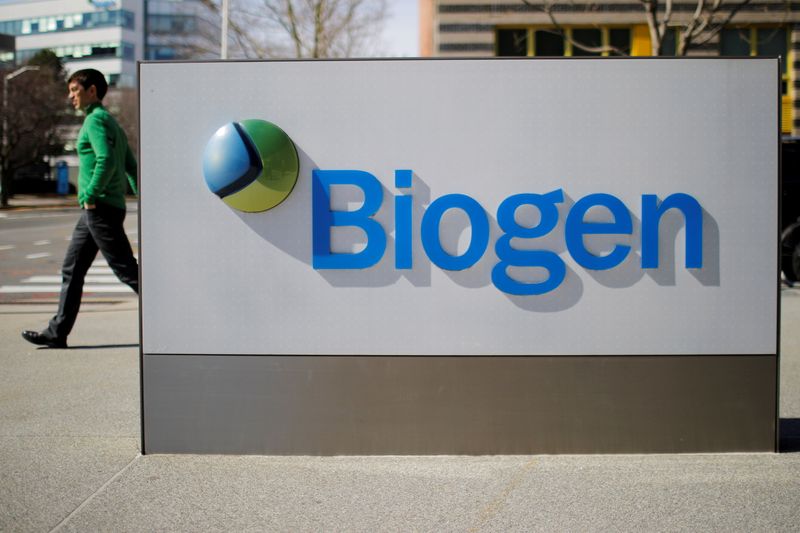 © Reuters. FILE PHOTO: A sign marks a Biogen facility, some of whose employees have tested positive for the coronavirus after attending a meeting in Boston, in Cambridge, Massachusetts, U.S., March 9, 2020. REUTERS/Brian Snyder/File Photo

(Reuters) -Biogen Inc said on Tuesday it expects to begin shipping its newly approved Alzheimer’s drug Aduhelm in about two weeks and has prepared more than 900 healthcare centers for the intravenous infusion treatment.

The U.S. Food and Drug Administration on Monday approved Aduhelm as the first treatment to target a likely underlying cause of Alzheimer’s disease, sticky deposits of a protein called amyloid-beta.

Biogen (NASDAQ:) Chief Executive Officer Michel Vounatsos said on a call with analysts that the sites include clinical trial centers with currently confirmed amyloid-beta positive patients, as well as other locations with infrastructure to diagnose and treat patients.

The company priced the drug at $56,000 per year and patients who are prescribed it need to undergo additional testing in the form of either a Cerebrospinal Fluid (CSF) test, or a PET scan to confirm the presence of amyloid-beta in the brain.

Biogen CFO Michael McDonnell said on the call there are about one to two million Americans who have been diagnosed with mild dementia or cognitive impairment, who would be amyloid-beta positive if tested.

The need for PET or CSF tests and the limited availability of specialists to oversee patients taking the drug could limit Aduhelm’s use in these patients, McDonnell said.

“We believe the majority of diagnosed patients are not currently under the care of a specialist, and as a result we expect gradual uptake over time,” he added.

Revenue from Aduhelm could start ramping up in 2022 and beyond, but could be low in 2021 due to the need for sites to prepare to diagnose and treat patients, and the time that it will take to secure insurance coverage for the drug, McDonnell said.

Guggenheim analysts on Monday estimated sales from the drug could be over $1.3 billion in 2022. Biogen shares were down about 3% at $384.87.