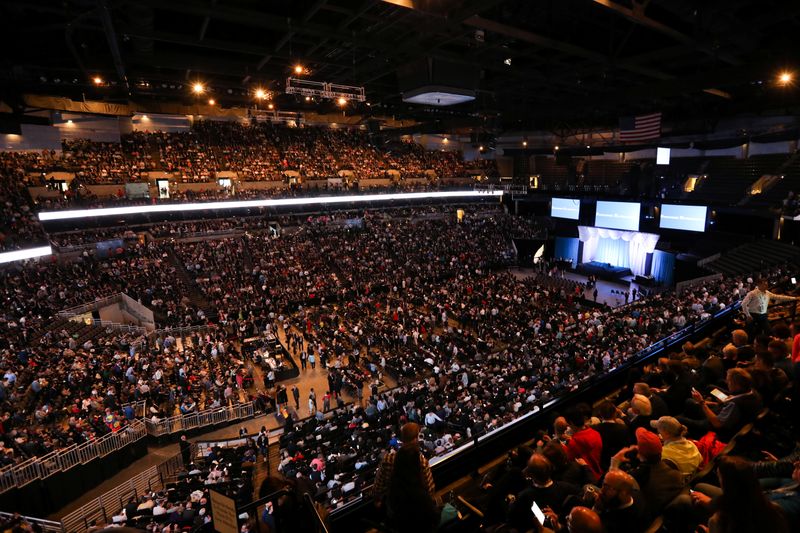 (Reuters) – Berkshire Hathaway (NYSE:) Inc reversed course on Friday and told an activist group it could present a shareholder proposal remotely for the company’s May 1 annual meeting, in line with renewed guidance from the U.S. securities regulator.

Warren Buffett’s insurance and investment company traditionally draws thousands to its extravagant annual meeting in Omaha but, like many top U.S. corporations during the coronavirus pandemic, had asked investors to log in to the meeting remotely instead of attending in person.

The shift to online has stymied many activist investor groups whose shareholder resolutions often animate the meetings, however. Some have been muted via the technology or told they could only present resolutions in person despite the health risks.

That was the case at Berkshire for As You Sow of Berkeley, California, which filed a measure calling for the company’s subsidiaries to report on diversity and inclusion efforts, and was told it would have to send a representative to Los Angeles where some directors and staff would gather for the livestreamed webcast.

“We would have preferred that As You Sow present their proposal at the location of the shareholders meeting in Los Angeles. However, we will provide As You Sow an opportunity to provide a recording to be played at the meeting as a means of presenting their shareholder proposal.”

As You Sow welcomed the decision. The organization is “unwilling to risk other people’s health, so we are relieved that the company changed course,” President Danielle Fugere told Reuters.

When Berkshire Hathaway contacted the group, it cited new instructions from the U.S. Securities and Exchange Commission, As You Sow said.

As You Sow was among a group of activists and investors that on April 5 asked the SEC to extend last year’s guidance to allow the virtual presentation of proposals, which a number of companies seemed to be prohibiting this year, in time for the 2021 springtime shareholder meeting season.

“From the standpoint of pandemic safety, it is not yet time to require proponents to appear personally,” the letter stated.

In a statement posted on its website on Friday, the SEC said that in light of COVID concerns, corporations were encouraged to “provide shareholder proponents or their representatives with the ability to present their proposals through alternative means, such as by phone” during the 2021 season.

The agency also said proponents who couldn’t travel to meetings would have good cause to refile their proposals later.

Hamburg did not respond to questions about how it would be handling other shareholder groups.