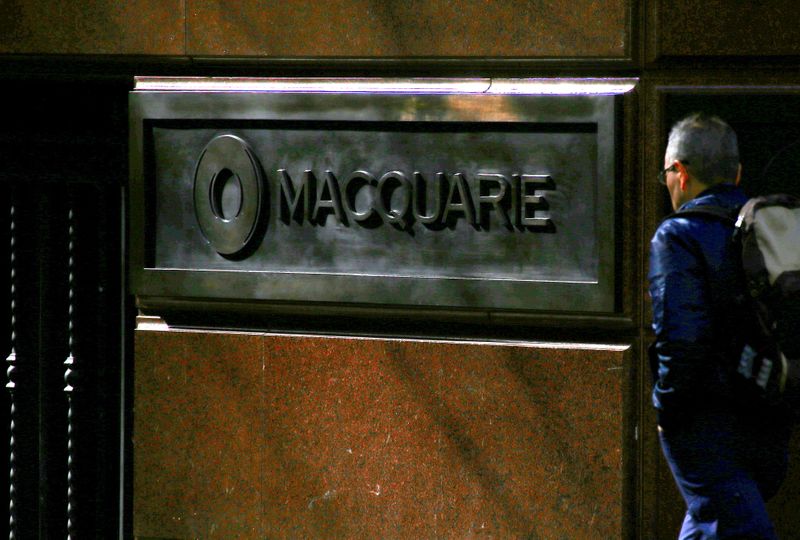 © Reuters. FILE PHOTO: A pedestrian walks past the logo of Australia's Macquarie Group at the firm's headquarters in central Sydney

By Paulina Duran and Byron Kaye

The purchase, one of the biggest finance industry buyouts by an Australian entity, puts Macquarie in the top 25 U.S. fund managers, it said, and reinforces a core business of a company that has diversified into running M&A deals, owning infrastructure, trading commodities and selling home loans.

CEO Shemara Wikramanayake, who started in the role two years ago after running the division responsible for Thursday's purchase, had previously said she wanted to make large acquisitions. The choice of Waddell & Reed, a 70-year-old Kansas firm with 922 advisers, shows Wikramanayake keeping a global focus without reinventing the company's business profile.

"We see the deal as financially compelling," said Morgan Stanley (NYSE:MS) analysts in a client note. "This signals (Macquarie) is ready to deploy excess capital."

Goldman Sachs (NYSE:GS) analysts said "the potential scale benefits make sense" and suggested Macquarie would target a similar opportunity in Europe for its next purchase with A$8.5 billion in surplus capital.

Shares of Waddell & Reed soared 47% in extended trading, in line with the premium Macquarie offered to its last closing price, while Macquarie shares were flat against a slightly higher Australian market.

As part of the deal, Macquarie will sell Waddell & Reed's (NASDAQ:REED) wealth management platform to U.S. investment adviser LPL Financial (NASDAQ:LPLA) Holdings Inc for $300 million, and then begin a partnership with the firm.

Waddell & Reed had in recent years become a "diversified and growth-oriented financial services enterprise (and) the long-term partnership between Macquarie and LPL as part of this transaction accelerates that transformation", the target company's CEO Philip J. Sanders said.