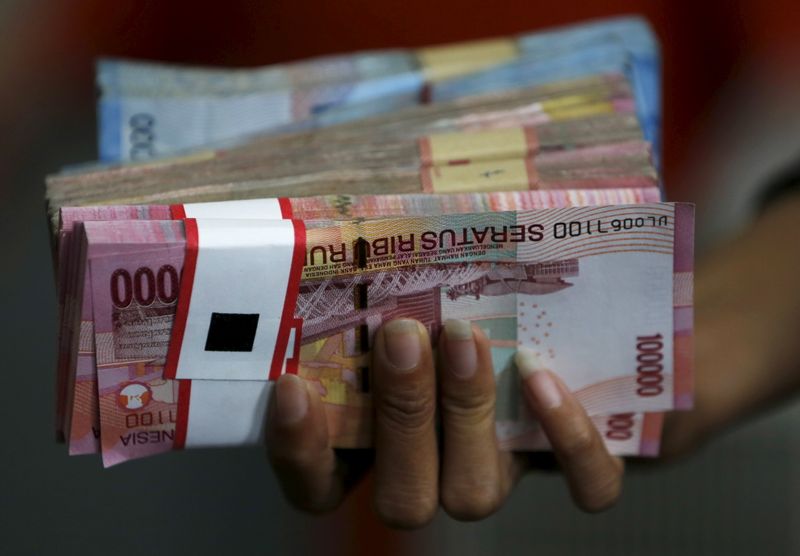 © Reuters. An employee of a money changer holds a stack of Indonesia rupiah notes before giving it to a customer in Jakarta

(Reuters) – Foreigners turned net sellers of Asian equities in January, after three consecutive months of buying, as they booked profits amid worries over rising coronavirus cases and lofty stock valuations.

For a graphic on Foreign investments in Asian equities:

Global COVID-19 cases crossed over 100 million last month with more than 2 million dead, and some delay in vaccine distribution around the world also curbed risk appetite.

The MSCI's broadest index of Asia-Pacific shares' forward 12-month price-to-earnings ratio (P/E) surged to 17.42 at the end of January, the highest since September 2009.

After pouring over $4 billion in South Korean and Taiwanese equities in the last quarter of 2020, foreigners took out vast amounts of money from the two markets in January.

South Korea, which had initial success in containing the pandemic, has experienced its third and strongest wave of infections this winter, and also faced criticism it was slow to secure vaccines for its 52 million people.

"Korea is behind in rolling out its vaccine with the Korean Disease Control and Prevention Agency promising to inoculate 70% of its 52m population by September", brokerage firm Jefferies (NYSE:JEF) said in a report.

"We downgrade (South Korean equities) to Modestly Bullish as the equity market looks expensive versus bonds," the report said.

On the other hand, Indian and Indonesian equities lured $2.66 billion and $1.1 billion, respectively, in inflows last month.

"There is some rotation between markets going on," he said.

For a graphic on Asia COVID-19 vaccination: