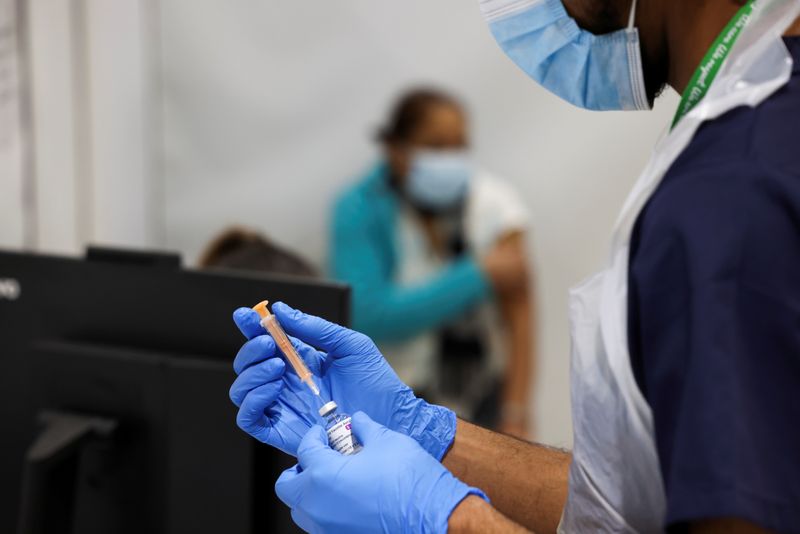 By Tommy Wilkes and Ritvik Carvalho

LONDON (Reuters) – Sterling looks set to extend its rally beyond $1.40, thanks to the pace of Britain's COVID-19 vaccine rollout and signs that investors are flocking back to assets out of favour during years of Brexit turmoil.

The signing of a post-Brexit accord on Christmas Eve, while leaving Britain more distanced from the European Union than investors had hoped, ended years of uncertainty.

That alongside a vaccination campaign running well ahead of most countries has helped the pound become this year's best-performing G10 currency, with a 3% gain versus the dollar.

With sterling hitting a three year high, that is a major turnaround from September/October, when the pound fell below $1.27 and overseas investors fled.

Sterling's year-to-date gains are even more impressive against other currencies – it is up 5%-plus to the Swiss franc and Japanese yen.

"Second, it's doing a tremendous job vaccinating which is making people think there's scope for UK to recover earlier than Europe and in line with the United States," she added.

Reopening the economy matters more for Britain than most developed nations, LaRusse said, noting services comprise 80% of its annual output. The corresponding figure in Germany is 70%.

Prime Minister Boris Johnson set out a "cautious but also irreversible" plan on Monday to end England's COVID-19 lockdown, although the final step — when most restrictions would be lifted — will not start until June 21 at the earliest.

The government's pledge to offer all adults a first COVID-19 shot by July 31 has prompted a rash of forecast upgrades on the pound.

Citi strategist Adam Pickett said on Sunday his target was $1.43 over the next one-to-three months, describing bets on the reopening of the British economy as not well priced and investor positioning not "particularly stretched".

Goldman Sachs (NYSE:GS) advises buying the pound versus the Swiss franc with a 1.30 franc target — a further 3% sterling gain.

The bank cited the Bank of England's reluctance to cut interest rates below 0% and the chance of the services-dependent British economy rebounding strongly "when excess savings are unleashed".

Reflecting the mood, three-month implied sterling volatility — an option market gauge of how much a currency could move — has dropped from emerging market-like double digit rates seen during Brexit brinkmanship to 7.3%.

Adding to sterling's appeal, the 10-year inflation-adjusted yield premium that investors can earn from U.S. Treasuries over British government bonds has fallen to its lowest in five years.

Britain's economy shrank 10% last year, its biggest contraction in 300 years. The BoE forecasts a 4% fall in the first three months of 2021. But the promise of a faster rebound is luring investors who had been deterred by Brexit and the pandemic hit.

Britain's stock market is also dominated by mining, energy and financial firms. Out of favour for years, these sectors are now pricing in a global post-pandemic rebound.

Nor have investors taken out huge bets on sterling to rise since the recent upturn in price. Long positions – or bets on the pound to rise versus the dollar – total 13% of open interest, up 10 percentage points since the start of the year, ING Bank notes.

What is more, when measured against a basket of the currencies of its trade partners, the pound is 15% below its long-term average value.

Some such as Valentin Marinov, head of G10 FX research at Credit Agricole (OTC:CRARY), reckon the pound is "overbought".

After all, Britain still must agree a deal with the EU for financial services and its balance of payments deficit makes it vulnerable to sentiment swings.

Charles Diebel, head of fixed income at asset manager Mediolanum, is long sterling but says markets should not get "carried away" by UK prospects.

"From a developed market economy perspective, Britain has become a litmus test for vaccines and how the move out of lockdown will go," he added.