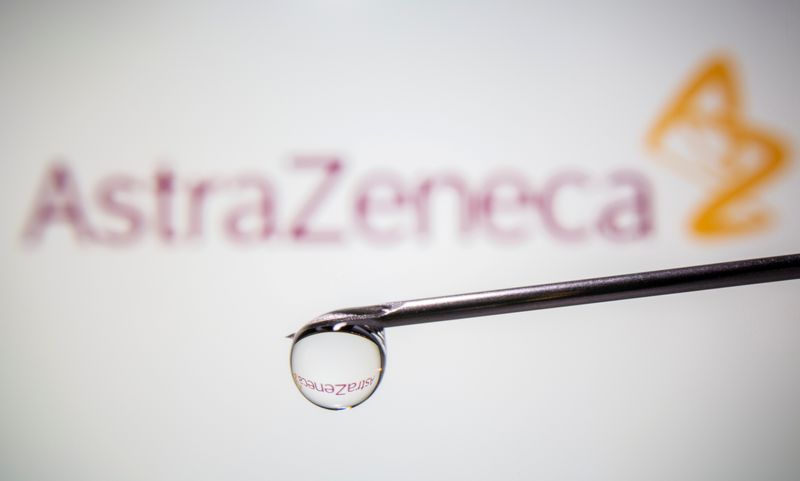 © Reuters. FILE PHOTO: AstraZeneca's logo is reflected in a drop on a syringe needle in this illustration

LONDON (Reuters) – British health officials greenlighted the AstraZeneca (NASDAQ:AZN) and Oxford COVID-19 shot on Wednesday but also rebuffed one of their central claims: that a half-dose followed by a standard dose offered more protection against infection.

The reassessment of the best dosing regimen for the vaccine was an unexpected move by Britain’s medicines regulator based on its own analysis of as-yet-unpublished data and it raised fresh questions about the efficacy of a vaccine which has yet to be approved in other countries.

Though cheaper and easier to distribute than rival shots, the Oxford/AstraZeneca vaccine has been plagued with uncertainty about its most effective dosage ever since data published last month showed a half-dose followed by a full dose had a 90% success rate while two full shots were 62% effective.

Oxford researchers said that the more successful outcome was an “intriguing result” that merited further testing.

A Reuters investigation, however, found that the existence of the low-dose/standard-dose arm was the result of a potency miscalculation by Oxford researchers, casting doubt on the robustness of the result.

Munir Pirmohamed, chair of a British advisory group on COVID-19 vaccines, validated those doubts on Wednesday saying the 90% efficacy rate did not hold up under analysis.

Instead, Pirmohamed said a higher success rate may be due to a longer gap between the administration of the first and second shots.

"The low dose/standard dose regimen, although it has been quoted to have an efficacy of 90%, this is confounded by the fact that the interval between the first and second dose was quite long," Pirmohamed told a news conference.

"And we feel that that result may be related to that interval, rather than the dose itself," he said.

The UK's COVID-19 vaccine chair, Wei Shen Lim, said a single dose of Oxford/AstraZeneca's vaccine was around 70% effective from 21 days until a second dose was given.

Pirmohamed said that leaving the three month gap rather than a one month gap between doses could lift the success rate of the AstraZeneca/Oxford vaccine to 80%.

After British health officials disclosed the new details about the efficacy of the vaccine, an AstraZeneca spokesman said: "It is for the regulators to authorise how the vaccine should be used."

"Factors they will have taken into account include the comparable immunogenic response after two doses with either regimen, as is the protection against severe disease (100%)," he said.

"We believe we have got the best vaccination strategy approved by the MHRA."

Faced with a record surge in infections driven by a highly contagious variant of the virus, Britain is prioritising getting a first dose of a vaccine to as many people as possible over giving second doses. Delaying the distribution of second shots would help stretch the supply.

Britain’s Medicines and Healthcare Products Regulatory Agency (MHRA) recommended an interval of between 4-12 weeks between doses of the AstraZeneca/Oxford vaccine and also updated its guidance for a second dose of the Pfizer-BioNTech shot saying it could be administered within 12 weeks, rather than the 21 days originally recommended.

Hundreds of thousands of Britons have already received their first dose of the Pfizer (NYSE:PFE) vaccine after the UK was the first country to approve its rollout, with second doses due from this week.

Pfizer sounded cautious on the prospect of shifting the schedule of its second dose, noting it had not been evaluated on different dosing schedules.

"There are no data to demonstrate that protection after the first dose is sustained after 21 days," it said in a statement, adding that the implementation of alternative schedules should be closely monitored.

"While decisions on alternative dosing regimens reside with health authorities, Pfizer believes it is critical… to ensure each recipient is afforded the maximum possible protection, which means immunisation with two doses of the vaccine."

AstraZeneca CEO Pascal Soriot was quoted in Britain's Sunday Times newspaper saying that his firm had a "winning formula" to rival the efficacy rates of around 95% shown by vaccines developed by Pfizer and Moderna (NASDAQ:MRNA). He said he could not say more pending publication of new data.

Speaking to Sky News, Oxford vaccine developer Sarah Gilbert said there had been transparency in the process.

"The MHRA have said that they will be publishing their assessment report. There are different groups within the trial, we've had different intervals between the doses, and different dose levels as you say, and that makes the analysis somewhat complicated," she said.

"The MHRA has done their own analysis, and they're very confident to now licence the vaccine for emergency use."

Oxford did not respond to a request for comment following the MHRA briefing.

Regulators in other countries have taken a more cautious approach than Britain and the different efficacy rates cited by the MHRA as well as its new recommendations on the timing of second doses prompted scientists to call for the details underpinning its approval to be released.

"More needs to be known because many points about these decisions remain unclear. MHRA and JCVI promised to provide more information urgently," said Saad Shakir, Director of the Drug Safety Research Unit near Southampton.

Jeremy Farrar, director of health research foundation Wellcome, said a new trial might be needed to give clearer data on the best timing of a second dose.

"We will also need to continue tracking and improving our understanding of how long the protection lasts and whether they can prevent transmission," he said.

"This would be best achieved by a randomised trial on the timing of the second dose."