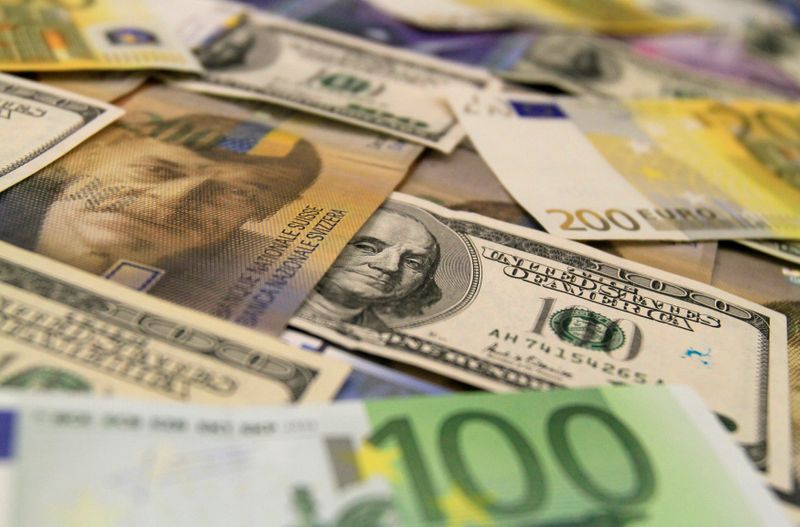 © Reuters. U.S. dollar, euro and Swiss franc bank notes are seen in a bank in Budapest

By Marc Jones and Elizabeth Howcroft

LONDON (Reuters) – Financial markets' euphoric reaction to the recent COVID-19 vaccine breakthroughs and U.S. election results is pushing some currencies up so fast that rumblings have begun about a potential new FX war.

Almost a decade after Brazil's finance minister likened Western central bank money-printing to economic warfare, some of the conditions that led countries to weaken their currencies then look to be forming again.

Investors' growing eagerness to buy into risky assets gave emerging market currencies their best month in nearly two years in November, stretching a run of gains that started in June.

A further extension — seen as likely after the dollar hit a two-year low on Thursday — would mark be their longest uninterrupted climb since 2012.

South Korea, Taiwan and Thailand are already worried enough that they have either intervened in their foreign exchange markets or taken other steps to try to prevent fragile economic recoveries being snuffed out.

In Sweden, whose crown is this year's best-performing currency, the central bank unexpectedly increased its money-printing programme last week.

"I think currency war would be a bit of a dramatic term to use right now, but you could say there have been some early warning shots," said UBS's head of emerging market strategy Manik Narain. "And if this currency strength continues, these countries could start to push back harder."

Competitive currency devaluations are blamed by economists for exacerbating the 1930s Great Depression and dragging for decades on world trade by fostering protectionism.

The cycle usually starts with tit-for-tat interest rate cuts and interventions, but can quickly escalate into capital controls or investment taxes to ward off hot foreign money like that now flooding into emerging markets.

Institute of International Finance data on Tuesday showed investors splurged a record $40 billion on stocks and $37 billion on bonds in emerging markets last month, a spree that was more than the previous three months combined.

The Mexican peso, Brazilian real, Turkish Lira, South African rand, Russian rouble and Polish zloty all jumped between 5% and 10%, adding to 5%-12% leaps in China, Taiwan and Korea's currencies since June.

For a graphic on Emerging market currency rebound:

It is not only the expectation that COVID-19 vaccines will normalise trade, travel and commodity prices driving the trend.

Global trade is expected to see the first expansion next year in three years, with the hope too that U.S. President-elect Joe Biden's government will be more predictable on that front.

"If you look at the areas in which potential currency wars could break out it would be the areas which have attracted the most capital flows or the most equity flows," PIMCO's head of emerging markets portfolio management Pramol Dhawan said.

He cited Taiwan, South Korea and China as the main hotspots, and potentially India going forward. It has already stacked up $85 billion worth of dollar reserves this year, Narain at UBS added, helping keep the rupee on the leash.

For a graphic on Changes in emerging market countries' FX reserves:

It is usually the pace rather than the extent of FX moves that lead countries to act.

When Brazil's Guido Mantega declared a currency war had broken out in September 2010, the dollar had lost more than 10% in around three months. And it didn't stop there, falling 17% by June 2011.

This time around the greenback is down 11% in eight months. But U.S. investment bank Morgan Stanley (NYSE:MS) thinks it is still 10% overvalued and Citi forecasts a record 20% drop next year as economies recover and the Federal Reserve continues stimulus.

Taking away the 8% leap in China's yuan, EM currencies are still down 5% this year, and some of the hardest hit, like Brazil's real and Turkey's lira, are down 25% and worth a fraction of what they were a decade ago.

"Honestly, if I were an EM policymaker, every day where my currency was strengthening I would be happy," Brooks said, noting that a stronger currency also makes it cheaper to repay the dollar-denominated debt that has been piling up.

Nevertheless, he thinks the euro and the yen will be shoved higher, requiring the European Central Bank and Bank of Japan to respond. China's reaction will also be watched closely, while Thailand's statement that it is watching the baht's rise "24 hours a day" highlights the building tensions.

"Our concern is the speed of the adjustment," Thailand's central bank governor, Sethaput Suthiwart-Narueput, said last week. "It has been largely nothing to do with us".

For a graphic on EM central banks keep cutting rates: