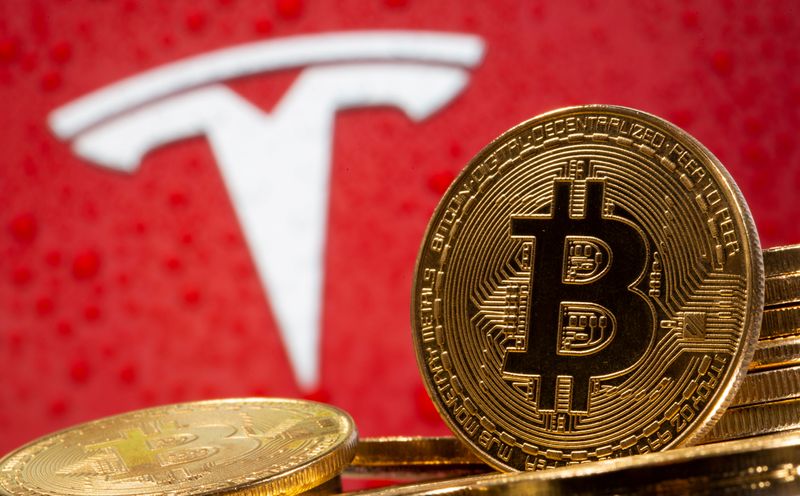 © Reuters. FILE PHOTO: Representations of virtual currency Bitcoin are seen in front of Tesla logo in this illustration

By April Joyner and Kate Duguid

(Reuters) – Investors in high-flying electric carmaker Tesla (NASDAQ:TSLA) Inc are questioning whether Elon Musk's $1.5 billion outlay into bitcoin will be as good for the company as it has been for the cryptocurrency.

Tesla's disclosure on Monday that it had moved nearly 8% of its reserves into bitcoin sent the price of the cryptocurrency to all-time highs, up more than 16% this week, while Tesla's shares are down nearly 6%. Others may follow Tesla's lead, with Twitter Inc (NYSE:TWTR)'s chief financial officer telling CNBC that the company has considered adding bitcoin to its balance sheet.

Shareholders voiced concern that the investment by Tesla, which recently joined the benchmark S&P 500 stock index, could fuel more gyrations in the company's shares.

"It will add volatility to the stock due to exposure to bitcoin," said King Lip, chief strategist at Baker Avenue Wealth Management, whose firm has owned Tesla shares since 2015. "This is better for bitcoin than it is for Tesla."

Gary Black, former chief executive of Aegon (NYSE:AEG) Asset Management and now a private investor who has been bullish on Tesla since 2019, on Monday announced https://twitter.com/garyblack00/status/1358795340862873602 on Twitter that he had sold his Tesla shares. He cited the absence of a 2021 delivery target and the company's riskier capital allocation strategy, among other reasons.

The difficulty of valuing the notoriously volatile cryptocurrency over the long term was also a cause for concern to investors.

"Elon Musk has exposed Tesla to immense mark-to-market risk," Peter Garnry, head of equity strategy at Saxo Bank, wrote in a research note, referring to an accounting method designed to measure the fair value of accounts — assets and liabilities — in order to provide a measure of current financial performance.

Tesla did not respond to a request for comment.

Garnry also wrote that investors with concentrated positions in Tesla, such as ARK Invest, are at risk. Tesla is the top holding of the flagship ARK Innovation Fund https://ark-funds.com/arkk#holdings, representing 8.75% of the portfolio.

Brett Winton, ARK's director of research, said Tesla's bitcoin investment was an "appropriate use of cash" and it did not change the firm's outlook on the carmaker.

"We are comfortable with the way in which we are forecasting the positions we are putting our clients in front of," he said.

On the fixed-income side, investors had mixed views on the impact of the bitcoin investment.

Tom Graff, head of fixed income at Brown Advisory, who holds Tesla's asset-backed securities tied to the company's auto leasing business but does not own its corporate bonds, said while bitcoin can be easily converted into cash, "you don't know what kind of value you would get or how quickly you could realize that value."

"If I were an unsecured bond holder, I would be very unhappy about this," said Graff.

Another fixed-income investor, who requested anonymity because of a position in Tesla's bonds, said the volatility would matter more for equity holders as Tesla has sufficient money to pay out its bondholders. Tesla last year raised cash, partly to ease future debt pressures.

Baillie Gifford partner James Anderson told The Times https://www.thetimes.co.uk/article/investors-may-put-brakes-on-elon-musks-bitcoin-sprees-at-tesla-6wvqfkh9q that he was content with the purchase, but his firm would discuss setting limits on how much could be put into the asset. Baillie Gifford declined comment.

Still, investors in Tesla have been rewarded for sticking with one of Wall Street's most controversial stocks. Over the past 12 months shares have risen 422%.

Indeed, the popularity of Musk's outsized public persona may mean that many longtime investors are ultimately inclined to view the move positively.