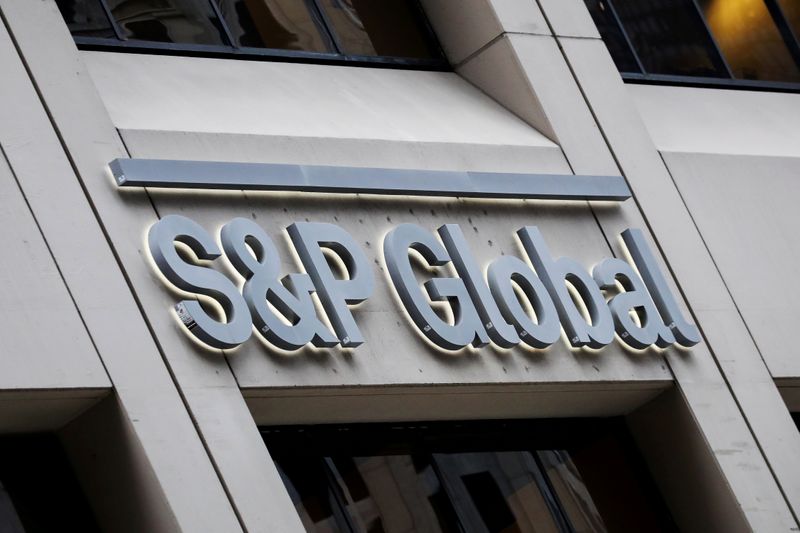 © Reuters. FILE PHOTO: The S&P Global logo is displayed on its offices in the financial district in New York

By David French and Krystal Hu

NEW YORK (Reuters) – Large acquisitions in the fragmented financial data industry are just a foretaste of the dealmaking to come, as vendors seek to expand their offerings and secure resources to invest in new technologies such as artificial intelligence, investment bankers and analysts say.

Two of the industry's top three players have inked transformative deals in the last two years, increasing pressure on No. 1 player, Bloomberg LP, and others such as CME Group Inc (NASDAQ:CME), Nasdaq Inc and MarketAxess Holdings Inc to join in, these experts said.

Among the potential acquisition targets, bankers said, are Factset Research (NYSE:FDS) Inc, Tradeweb Markets (NASDAQ:TW) Inc and MSCI Inc because of their strong niches in financial data. They have a market value of $13.4 billion, $14.3 billion, and $35.1 billion respectively.

Driving the dealmaking are data providers racing to diversify their offerings and using their existing distribution channels, such as desktop terminals, to sell more products.

The data vendors also need scale to splash out on technological innovations such as artificial intelligence and machine learning that can keep pace with the needs of their financial and corporate clients, from high-speed trading to big-data crunching.

"Without significant moves to enhance their businesses, these firms are less able to move quickly to mitigate their risk of loss," Burton-Taylor wrote in a report last week.

Bloomberg declined to comment. CME, Nasdaq, MarketAxess, Factset, MSCI and Tradeweb did not respond to requests for comment.

Last year, Refinitiv entered into a $27 billion agreement to be sold to London Stock Exchange Group (LON:LSE) Plc, while S&P Global (NYSE:SPGI) Inc clinched a $44 billion deal last week to acquire IHS Markit Ltd . Thomson Reuters (NYSE:TRI) Corp, the parent of Reuters News, owns a 45% stake in Refinitiv and will own about 15% of London Stock Exchange once that deal closes in early 2021. Intercontinental Exchange (NYSE:ICE) , the owner of the New York Stock Exchange, and another substantial player in financial markets data, said in August it would acquire mortgage technology platform Ellie Mae for $11 billion, extending its real estate capabilities.

Michael Bloomberg, the founder of the eponymous financial data behemoth, has eschewed large dealmaking thus far. Excluding a transaction where a stake in the company was bought back from another party, Bloomberg's largest ever acquisition was that of Bureau of National Affairs Inc, a provider of legal, tax and regulatory information, in 2011 for $962 million.

This reflects Bloomberg's faith in the enduring success of its terminal business, the software that provides business information and connects users that has become ubiquitous in the finance and corporate world, according to investment bankers who have for years been pitching potential deals to the company.

Bloomberg's competitors have not been able to displace it as the financial data market leader. It has made the terminal synonymous to having a business desktop, akin to referencing Google (NASDAQ:GOOGL) as shorthand for internet searching or Zoom for video conferencing calling.

Yet while the terminal's dominance is not under threat, the company's growth prospects are, industry experts and analysts said. The trading floors at Wall Street firms that powered Bloomberg's meteoric rise are no longer expanding, and some of its customers who need niche information are moving to data vendors that charge less than the terminal's $20,000-plus annual subscription.

Bloomberg will have to overcome its aversion to big acquisitions in order to diversify its revenue while its terminal business is still strong, the bankers and analysts said.

"Strategically they may want to look beyond their current industry by expanding into verticals, including the energy and technology industry, or providing more data to current customers," said Jeff Silber, an analyst at BMO Capital Markets.

Another clock ticking for Bloomberg is its founder, a major philanthropist and former candidate for U.S. president. The 78-year-old mogul, whose fortune is pegged by Forbes at $55 billion, has led the company on and off as chief executive for four decades. He has resisted investment bankers' pitches for an initial public offering that would allow him to sell down his roughly 90% stake and for his employees to sell company shares they have been awarded in the open market.

EXCHANGES ON THE HUNT FOR DEALS

CME Group, the world's biggest futures exchange operator, may look to diversify its revenue as persistently low interest rates reduce demand for its hedging products through futures on rates, commodities and currencies.

Nasdaq has said it wants to expand its market technology and information services businesses. Last month, it agreed to buy fraud detection platform Verafin for $2.75 billion, another milestone in its push to diversify revenue stream away from trading.

Nasdaq did not respond to a request for comment.

Marketaxess, an operator of fixed income trading platforms, made two small purchases in the third quarter which extended its trading, data, and post-trade businesses, and analysts have said it is seeking to diversify further.

Marketaxess did not respond to a request for comment.