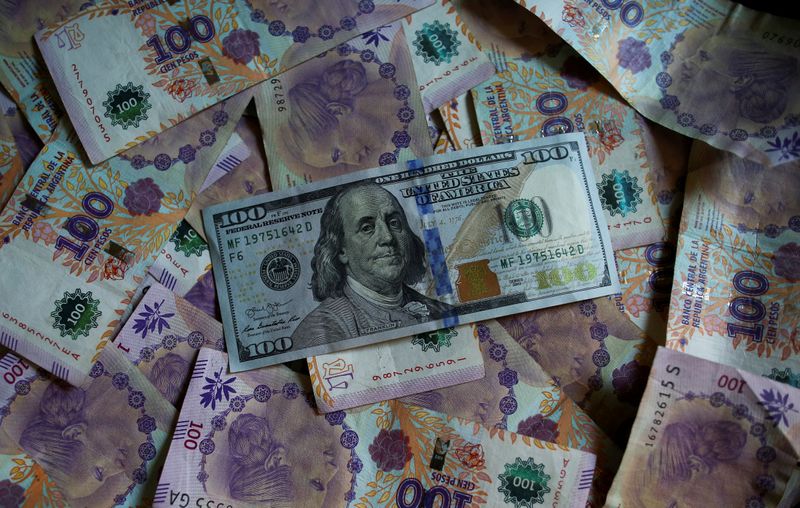 It is a road Argentina, no stranger to currency woes, has been down many times before. But it poses one of the biggest challenges yet to the year-old government of center-left President Alberto Fernandez.

Argentina desperately needs to rev up trade flows. But they have been gummed up by tough capital controls keeping the peso artificially strong, sparking fierce demand for black market dollars and prompting widespread angst about devaluation.

Traders and producers alike, especially the country's important grains farmers, have been holding off on selling produce, anticipating a new official exchange rate that would make the dollar value of their exports worth more in pesos.

"If you are an importer, you import at the official exchange rate but you don't know the rate you will get to replace the merchandise," said Guido Lorenzo, an economist at consultancy LCG, adding this could stoke inflation or hit availability.

"The exporter does the same, evaluates whether it is convenient for him to sell or hoard the product."

That hoarding has seen exports dip since a peak in May, with Argentina's trade surplus dropping sharply in September and October to around $600 million, from above $1.4 billion before.

The country needs dollars from exports to bulk up depleted reserves and ensure it can make future payments after restructuring over $100 billion in foreign currency debt. It is now facing crunch talks with the International Monetary Fund over $44 billion it cannot repay.

Exports to China particularly tumbled in recent months, with a large drop in sales of soy beans, indicating farmers in Argentina's fertile Pampas grasslands are sitting on their crops. That has also hit crushing volumes at the huge processing plants along the country's Parana river.

Behind the fear of devaluation is a wide gap between the official peso-dollar spot rate and informal currency trades, where greenbacks have cost more than twice the price.

Argentina's peso was trading at 81.49 per dollar on Wednesday, compared to 154 in the black market and 148 per dollar in the legal but unofficial 'blue-chip swap' market. Net reserves meanwhile have dipped near to zero.

Argentina, caught in recession since 2018, defaulted on its debt for the ninth time earlier this year. It needs to revive the economy and bolster reserves to reassure markets and investors it will not simply slide into default again.

Casanovas, the shopkeeper, said uncertainty over prices meant some "some suppliers had suspended sales."

"I set my prices in pesos, but when I have to replace it, then yes it's in dollars," she said, explaining why she had pulled imported drinks off the shelves at the neighborhood store. "I cannot be setting a different sale price every day."

"The pandemic caused a serious problem, which is that many factories are at 50% of available personnel," he said.

"The other problem is not the exchange rate but the gap between one and the other. There were weeks without sales, when the black-market dollar began to climb," he added.

Some analysts and investors said the central bank will have to choose between further tightening already strict capital controls or allowing the peso to devalue more quickly.

In the key grains sector, farmers and industry officials say many growers are waiting to make sales, hoping for a weaker peso with their products priced in dollars. That is stalling exports and hitting the inflow of foreign currency.

The government is also pushing exporters to convert their dollars into local currency, with the threat of an export ban for those who do not comply.

"Farmers trust in grain. Not in pesos," said Santiago del Solar, a corn and soy farmer in the bread-basket province of Buenos Aires. "They won't sell grain just to get pesos and keep them in the bank."