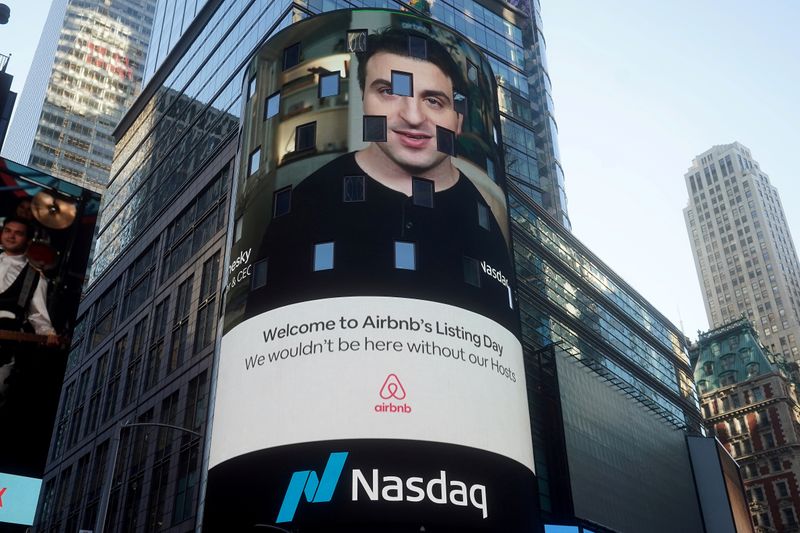 © Reuters. FILE PHOTO: The Nasdaq market site displays an Airbnb sign featuring CEO Brian Chesky on their billboard on the day of their IPO in Times Square

By Joshua Franklin and Krystal Hu

NEW YORK (Reuters) – Wild stock gains on the first day of trading of Airbnb Inc and DoorDash Inc show how unprecedented demand this year from individual investors is making it difficult not to leave big money on the table, investment bankers say.

In this year's biggest week for U.S. initial public offerings (IPOs), food delivery app DoorDash raised $3.4 billion, only to see its stock rise as much as 92% on the first day of trading. If it had priced the offering higher, it could have raised an additional $2 billion and still have a strong 20% first-day pop.

Shares of Airbnb rose as much as 142% on their first day of trading on Thursday after the home-sharing firm raised $3.5 billion in its IPO. It could have raised double that and also had a 20% pop.

Leaving money on the table is nothing new for high-profile stock market debuts, yet the consistently large gap between the IPO and first-day trading prices is unique to 2020. It underscores the challenges of anticipating demand coming from an expanding pool of investors, such as millennials working from home during the COVID-19 pandemic and trading stocks on the Robinhood app, IPO bankers say.

"One thing that has emerged in last 12-18 months with the new issue market is the retail component, which seems to have an insatiable demand for some of these newly issued stocks," said Brad Miller, co-head of equity capital markets at UBS Group AG (SIX:UBSG), which underwrote DoorDash's IPO.

Fourteen of the 30 IPOs with the biggest first-day-close gains of the last 15 years were in 2020, according to Dealogic. Nineteen IPOs of companies in 2020 had shares whose value more than doubled in their first day of trading, the most since 2014, when there were six.

Some of the drivers behind the surge in demand for newly issued shares are the same as those that have pushed the stock market to record highs this year: low interest rates, a gradual economic recovery and the prospects of a quick rollout of vaccines to beat the pandemic.

But others are unique to IPOs and are challenging for bankers to price in advance. The rise of low-cost, easy-to-use trading apps has unleashed a flood of retail investor money into stocks. Retail investors have accounted for as much as 25% of the stock market's activity this year, up from 10% of the market in 2019, according to brokerage Citadel Securities.

Bankers and investors say the new demand exacerbates what is already a scramble for new listings. Underwriters reserve most of the new shares in red-hot IPOs for top institutional investors, cutting out mom-and-investors who can only buy in once the shares start trading.

This build-up in demand, coupled with the relatively scarce supply of the new shares, has always helped drive a pop in the first day of trading. The influx of new retail money is now making this pop more profound and hard for companies and their bankers to foresee. While the underwriters have great visibility into IPO demand among Wall Street's elite circles, they cannot predict how many Robinhood users will buy the new shares.

As a result, many newly listed companies, especially technology firms such as Snowflake Inc and C3Ai Inc, are trading at record-high valuation multiples this year.

"The animal spirit frenzy that happens as these companies are dropped into the stock market is smaller investors flocking to them like piranhas to fresh steak. That is why we are seeing valuation metrics get thrown out the window right now," said Max Gokhman, head of asset allocation at Pacific Life Fund Advisors.

There is no sign that companies that left money on the table are upset with their bankers. DoorDash CEO Tony Xu told Reuters in an interview this week the company priced its IPO as a "true reflection of our fundamentals."

When Airnbnb CEO Brian Chesky learned of the first-day trading reaction to the IPO on Thursday during a Bloomberg TV interview, his reaction was one of amazement rather than anger with his bankers. "I'm very humbled by it," Chesky said.

Many companies seeking to raise money during a stock market debut feel they have no good alternative to using IPO underwriters. A route to the stock market that does not rely on underwriters, known as a direct listing, does not currently allow companies to raise money. And mergers with black-check acquisition firms, which enable companies to go public while raising money, can be very dilutive to their owners.

He attributes this to the big investment banks seeking to keep their major customers such as hedge funds, who are buying the new stocks, happy. He said many companies do not push back because the IPOs exceed their valuation expectations.

"When companies like Airbnb started the process, they didn't know what market conditions were going to be like months later, and they are happy that the deal is being completed, especially when the offer price gets raised," Ritter said.