There’s a lot of talk about the return of “boring” in Washington, D.C. Maybe it’s happening on Wall Street, too, and many investors would likely welcome that after the wild January we just had. Robust earnings late Tuesday from Amazon (NASDAQ:AMZN) and Alphabet (NASDAQ:GOOGL) turned the focus back toward earnings this morning.

Some of the frenzy moved to the fringes as the week continued, calming things a little. Volatility edged lower again early Wednesday as the short squeeze mania died down. Bonds also retreated, taking the 30-year yield up to nearly 2% and the 10-year yield up to 1.12%. The improving economy and expected stimulus are starting to show up in the bond market, and strong earnings might also be part of that.

Earnings season usually turns the focus back toward the market’s inner workings, but that hadn’t been the case as much this time around with all these distractions. Now it feels as if we’re getting back to the things that really matter—boring but essential stuff like cash flow, R&D, SG&A. All those fun things that veteran market watchers love to dissect this time of year.

Earnings season started out slow but keeps getting better. And now at least some companies are enjoying the fruits of their labors, so to speak, as investors reward stocks like GOOGL for strong quarterly performance. Earlier on this earnings season, it felt like meeting expectations often got companies punished, and even beating expectations didn’t bring much reward. Part of this might have to do with the market being up so much already.

Yesterday’s surprising announcement that Amazon CEO Jeff Bezos plans to leave his position later this year didn’t immediately seem to move shares, though everyone’s still soaking up the news. Maybe the stock didn’t react too much because he’s really not going anywhere. Bezos will be executive chairman, which means he’s likely to keep himself involved in at least some of the day-to-day business.

Think back to when Bill Gates of Microsoft (NASDAQ:MSFT) left the CEO spot to become chairman in 2000. He kept playing a big role until 2006 when he officially stepped aside. Not to say it’s exactly the same situation with Bezos now, but that may be what some investors are thinking. MSFT’s stock didn’t move much the day Gates took a new position in 2006.

One of the more interesting questions to ponder in coming months is what Andy Jassy—who’s set to take over as AMZN CEO in Q3 and currently heads cloud computing behemoth Amazon Web Services (AWS)—might have in mind when he grabs the wheel. He’s certainly going to bring a lot of cloud experience, and that’s been a huge focus of AMZN’s business (and success) lately.

Getting down to nuts and bolts, AMZN joined Apple (NASDAQ:AAPL) in the $100 billion quarterly revenue club by easily outpacing Wall Street analysts’ expectations on earnings and revenue in Q4. It looks like holiday shopping helped the company. The question is whether AMZN shares can continue their rally, because lately the Tech stocks that beat on earnings got punished in the market. Think back to AAPL last week and MSFT not long before that. With those two, it felt like a classic “buy the rumor, sell the news” scenario, though arguably AAPL got caught up in some of last week’s frenzy.

Things were also in good shape over at GOOGL, on a very busy Tuesday afternoon. The company beat analysts’ estimates on top- and bottom lines as well as in every business, quarterly ad revenue kept up its momentum from the prior quarter, and shares rocketed 7% to all-time highs in pre-market trading. So at least in GOOGL’s case so far, positive news isn’t being treated as a reason to take shares lower.

Another big development Tuesday was plummeting volatility, but keep in mind that contracts farther out in the Cboe Volatility Index (VIX) futures complex indicate chances for higher values in the months ahead. This could serve as a warning sign that we’re far from out of the woods as far as volatility is concerned. That’s especially relevant after we saw VIX leap from 21 to 37 in just a day last week. This isn’t the sort of move that’s quickly forgotten, and it’s probably still reverberating in the market.

The VIX—now back below 25—tends to spend a lot of time in certain trading ranges, so the next few days could help us get a sense of where that range might be. VIX had been between 20 and 25 for a while before last week’s surge.

On the plus side, Treasury yields rebounded nicely yesterday. The 10-year yield made it back above 1.1% at times before ending the day just below that, and the Financial sector appeared to draw some strength from the yield move. Financials climbed 2.5% to lead all sectors yesterday, but every sector rose. The Russell 2000 index of small-caps, heavily weighted toward banks, actually had a so-so day compared to most other indices, but still leads the major indices with a nearly 9% gain year-to-date. The S&P 500 Index now has 2% gains for 2021 after falling into the red for the year late last week. It’s kind of amazing what two positive days can do.

It’s hard to pinpoint a single reason why stocks have done so well so far this week. Growing optimism about vaccination progress, last week’s positive news on vaccine trials, the unwinding of some of last week’s short squeezes, hopes for a stimulus, some decent economic data, and improving earnings expectations (see more below) all could be playing a role.

Tuesday was pretty dead from a data perspective, but things pick up as the week continues. Initial claims and factory orders highlight tomorrow’s calendar, with analysts expecting claims at 825,000, research firm Briefing.com said. That would be down slightly from 847,000 the prior week, but this isn’t a statistic that’s fit into any particular pattern for a while. It bounces up and down pretty unpredictably, which is unfortunate because you’d like to see a steady downward trend. That just hasn’t happened.

It’s the opposite case with Friday’s monthly jobs report, where you’d like to see a steady up-trend in job creation. The trend has definitely been in the wrong direction since last fall, reaching a new low last month when job losses outnumbered gains due to nearly 500,000 lost positions in the leisure and hospitality sector. That led to a net job loss of 140,000, but remember it wasn’t all bad. There were plenty of green shoots as job gains occurred in construction, retail trade, transportation and warehousing, health care, and manufacturing. If those sectors continued to add jobs in January, it would probably make people feel better about the overall report even if leisure and hospitality again drags things down.

The average analyst estimate is for total job growth of 50,000 in January, Briefing.com said. That’s a pretty anemic number when you compare it to typical monthly growth of around 150,000 to 200,000 in the years before the pandemic. Analysts expect hourly wages to rise about 0.3% in January, down from 0.8% in December.

That uptick in December wages might have reflected the loss of leisure and hospitality jobs, an industry where pay tends to be low. Also, keep an eye on the U6 unemployment rate, which accounts for unemployed and underemployed workers. It fell to 11.7% in December from 12% in November, but remains historically high. If the economy really starts improving, this number should start dropping dramatically as more people find a way back into the workforce. 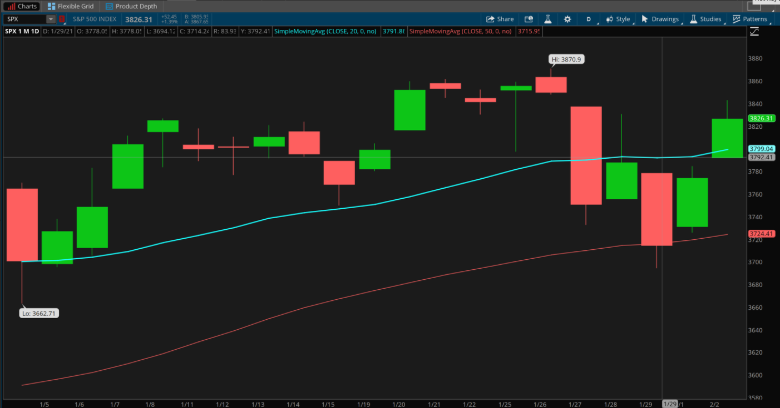 CHART OF THE DAY: CARVING A RANGE? After the (SPX—candlestick) dropped below its 20-day moving average (blue line) last week and briefly testing its 50-day moving average (red line) on Friday, it rebounded to close Tuesday above the 20-day again. This could be a sign of strong technical support at the 50-day. Any closes above the 20-day MA (now right near 3800) going forward could potentially indicate more strength ahead. If that doesn’t happen, it’s possible it could bounce back and forth in this new range between the 20- and 50-day MAs. Data Source: S&P Dow Jones Indices. The thinkorswim® platform from TD Ameritrade (NASDAQ:AMTD). For illustrative purposes only. Past performance does not guarantee future results.

SPX Influencers: We noted here yesterday how FAANGs plus their cousins Microsoft and Tesla (NASDAQ:TSLA) continue to exert a huge influence on the market. Note how the rally this week included the FAANGs after falling with the rest of the market last week. Is there a cause and effect going on here? Quite likely, yes. Which reinforces the possible pitfall of thinking of the market as one solid block. When the SPX goes up these days, it frequently means FAANGs are up, not necessarily the other 495 stocks in the index.

One analyst report recently noted that the SPX rose 18.4% last year, but would have been up just 4% without the combined contribution of the FAANGs plus MSFT. Now TSLA is also in the SPX with its $830 billion market cap, which means the volatility associated with that particular stock now could have even more influence on the SPX’s performance.

Earnings Estimates Escalate… The SPX fell 1.1% in January, raising concerns about the so-called “January barometer” that suggests a bad January often means weak stock market performance the rest of the year. However, putting too much emphasis on past trends isn’t always a good idea. The market has stumbled to start the year several times recently and then came back to do well. If things do improve, as they seemed to so far this week, it might be because earnings season continues to look pretty good. Not great, but pretty good, especially considering the lockdowns that went into place during the Q4 reporting period in the U.S. and many other countries. Analysts continue raising their estimates for Q4 S&P 500 earnings performance, with seven sectors recording climbs in analysts’ average estimates during January, according to research firm FactSet.

…As Companies Exceed Expectations: Getting down to earnings specifics, of the 189 companies on the SPX that had reported results by late Monday, 81% beat expectations, according to FactSet. Sometimes it’s not even the numbers that give the market a lift, and this may be one of those times. Some of the recent positive sentiment might stem from CEOs on their earnings calls, who’ve generally sounded optimistic about the economy reopening. Then there was Pfizer’s (NYSE:PFE)) earnings call yesterday when the company announced it would be able to deliver more vaccine sooner than expected, and Exxon Mobil (NYSE:XOM) remaining committed to its dividend despite a losing year for the company in 2020. Both these developments arguably helped boost sentiment across the overall market Tuesday.

Which companies reporting later this week have a chance to influence the broader market? There’s nothing as big as XOM or AMZN coming up, but keep your eyes open for Peloton (NASDAQ:PTON), Wynn Resorts (NASDAQ:WYNN), and Ford (NYSE:F) tomorrow afternoon. All of these companies can potentially speak to certain trends, including the pace of reopening and its possible impact as well as the electric car sector. WYNN reports after the casino sector had a strong day Tuesday.