Today’s newsletter will be relatively short, but I want to update our portfolio positioning with you. More importantly, I wanted to take this opportunity to wish you and your families a very Merry Christmas and share my hopes for a prosperous and safe New Year.

Over the last couple of weeks, we have discussed why we were positioning portfolios to participate in the traditional year-end “window dressing” rally. Such is also known as the “Santa Claus” rally.

As we discussed in “Will ‘Santa Claus’ Visit Broad & Wall:”

“Stock Trader’s Almanac explored why end-of-year trading has a directional tendency. The Santa Claus indicator is pretty simple. It looks at market performance over a seven day trading period – the last five trading days of the current trading year and the first two trading days of the New Year. The stats are compelling. 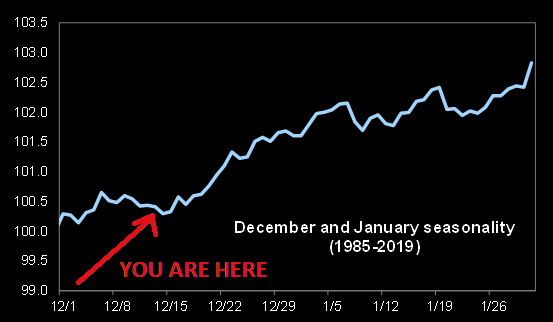 The statistics are very compelling. As Ryan Detrick noted this week:

“Whether optimism over a coming new year, holiday spending, traders on vacation, institutions squaring up their books before the holidays—or the holiday spirit—the bottom line is that bulls tend to believe in Santa Claus.” 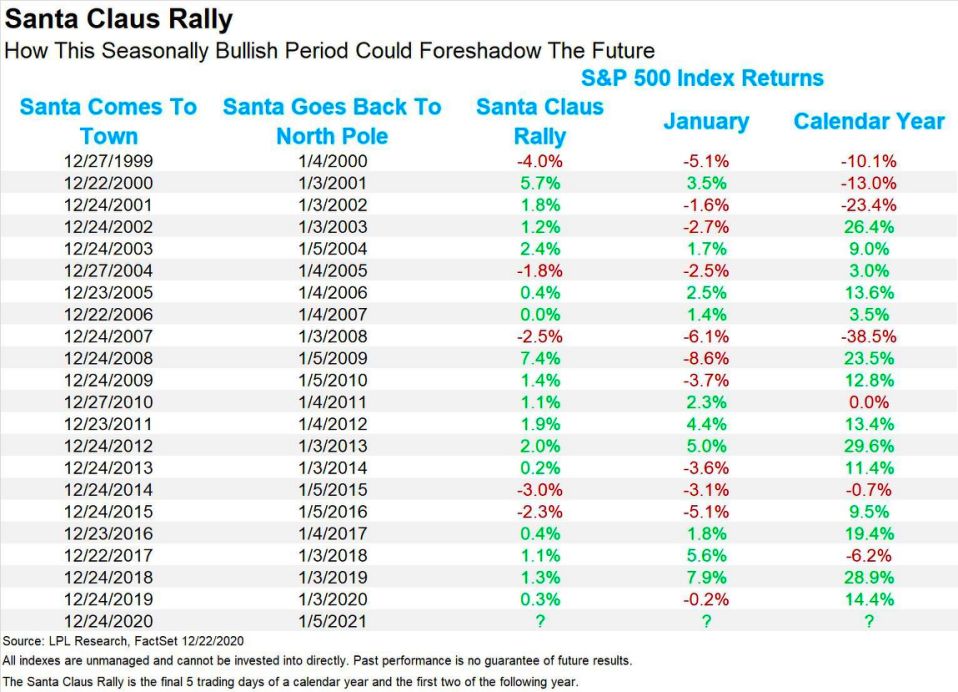 However, it is worth noting that on more than a few occasions when “Santa visited Broad & Wall,” the bull market didn’t continue in January.

A Review Of Negative Januarys

Let’s review the years in which January failed to carry through from the “Santa Rally.”

However, 2010 is a bit different as the economy had started a recovery, earnings growth was strong, and the Federal Reserve was amid QE-1. Yet, January had a -3.7% rate of return following the “Santa Rally.” Other than the “Haiti Tsunami,” there was no other major event causing stocks to decline except “exhaustion” after a 10-month uninterrupted advance.

In 2013, January also posted a negative return. The concern of the “fiscal cliff,” as the comprise to lift the “debt ceiling,” required a bipartisan group of Congressman to find $1 Trillion in budget cuts. Their failure to find cuts triggered an automatic set of cuts across agencies. Fed Chairman Ben Bernanke launched QE3 a month before to offset the impact of the “fiscal cliff.” However, given the cuts never materialized, the Fed’s flood of liquidity caused a surge in stocks over the rest of the year.

The beginning of 2020 also posted a negative January return following an incredible rally in 2019. More like 2013, the market’s extension was extreme with a near-record number of stocks above their 200-dma. The market needed to correct before continuing its advance to all-time highs in February.

January 2021 has a lot of similarities to both 2013 and 2019. With the Federal Reserve continuing QE and a near-record number of stocks above their 200-dma, and an extreme bullish bias, the risk of a correction exists. A government shutdown, stalled stimulus bill, or a surge in virus cases could do the trick.

The Grinch That Could Also Steal Christmas

As discussed in Wednesday’s “3-minutes” video, there is a potential “Grinch” that could also “Steal Christmas.”

Much of the equity rally this year has been supported by the decline in the USD. Currently, foreign inflows into U.S. equities are near a record, along with net-short positioning on the dollar. (Note previous record inflows.) 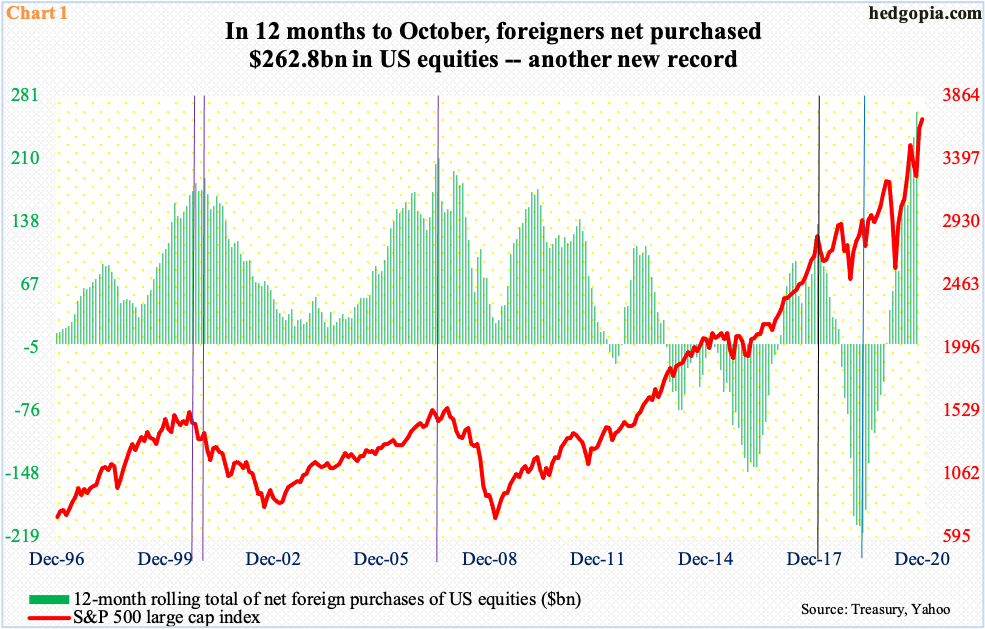 Such is the perfect environment for a sharp reversal in the dollar from deeply oversold conditions. Notably, over the last few days, we have seen a positive turn in the dollar. While still too early to definitively say a turn has occurred, this is something to watch very closely. 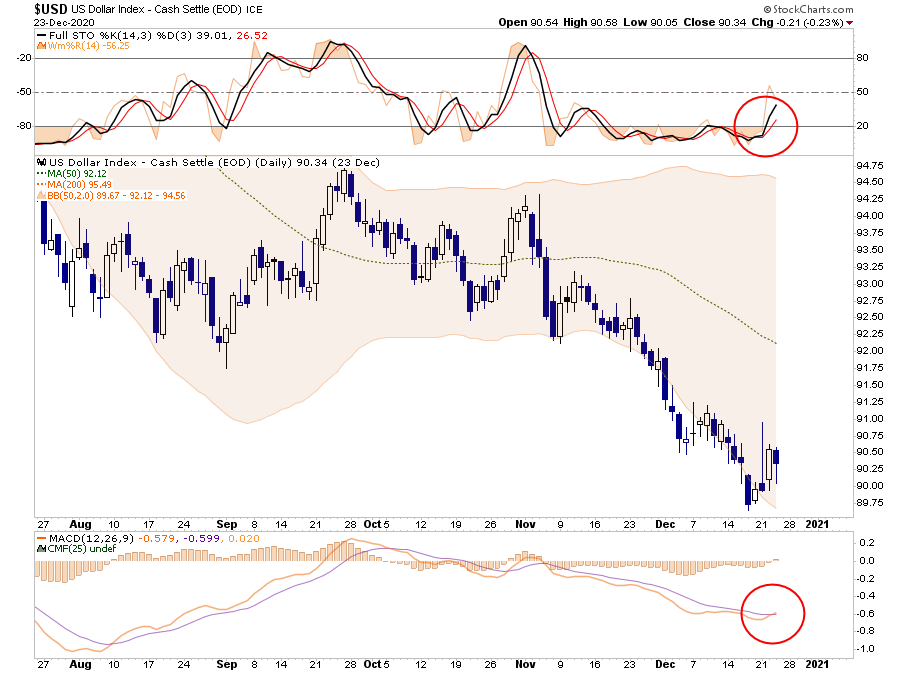 As shown below, the decline in the dollar has been a contributor to the equity rally. With money flows now turning positive, a counter-trend rally will potentially reverse the equity bid. 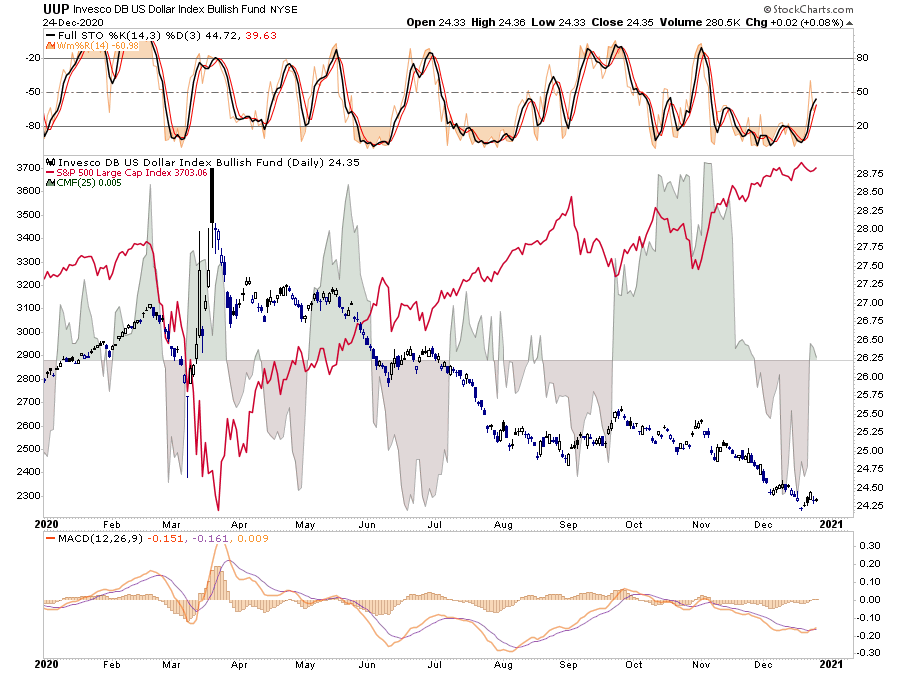 Of course, if dollar flows do indeed reverse, we would also expect to see a bid in Treasury bonds. Such would also get support from foreign currency reserves moving to higher-yielding alternatives compared to other global bonds. 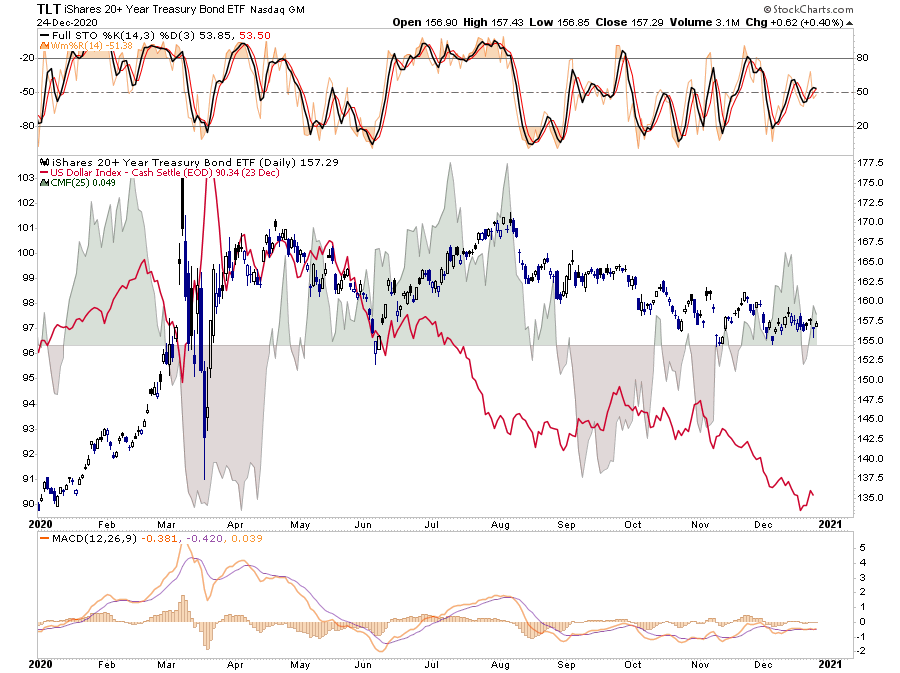 While we expect the “Santa Claus” rally to ensue over the next few trading days, there are risks heading into January. As noted, there are occasions when investors have received a “lump of coal.” With current market dynamics more similar to 2013 and 2019, this may be a year investors wind up on the “naughty” list.

A Record High In Overvaluation

SentimenTrader had a great post out this past week, with some more data showing the more extreme overvalued conditions in the market currently.

“Sentiment and valuation go hand-in-hand. One impacts the other and creates a self-reinforcing loop until something happens to break the cycle.

Over the past 40 years, there have never been more mild, moderate, or severely overvalued companies within the S&P 500.” 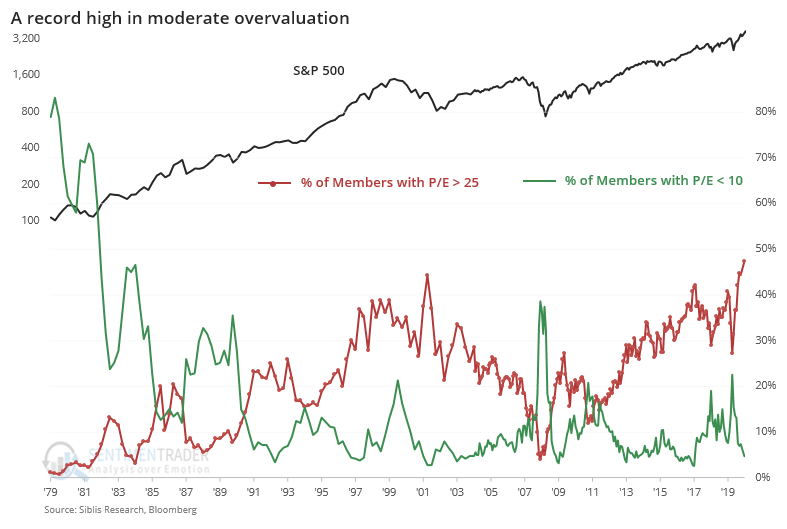 What is essential to understand is that excessive bullish sentiment and overvaluation are the two required ingredients for a “bubble.” 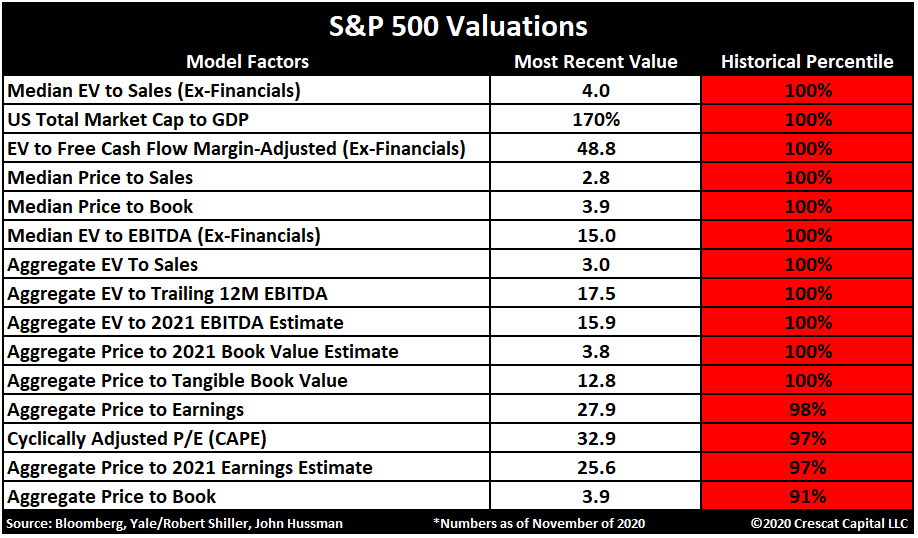 “Psychology” breeds “overvaluation,” which is the very essence of a market “bubble.”

Okay, I said this would be short.

With the “Santa Claus” rally officially kicking off next week, we are maintaining our long bias with reduced hedges at the moment. During the past week, we added to our energy exposure on the recent pullback and some of our “momentum” trades we took profits in previously. We are still maintaining our S&P Index position through next week.

Once we get into January, depending on the state of the stimulus bill, government shutdown, and market levels, we will likely begin reducing risk and hedging portfolios accordingly.

The evidence is mounting quickly that economic and earnings data will likely disappoint overly optimistic projections currently. Furthermore, investors are too confident. Historically, such has always turned out to be a poor mix for a continued bull market advance in the short-term.

We will continue to trade accordingly, but the extreme deviations in all markets from long-term fundamentals are unsustainable.

That is a problem the even the Fed can’t fix.