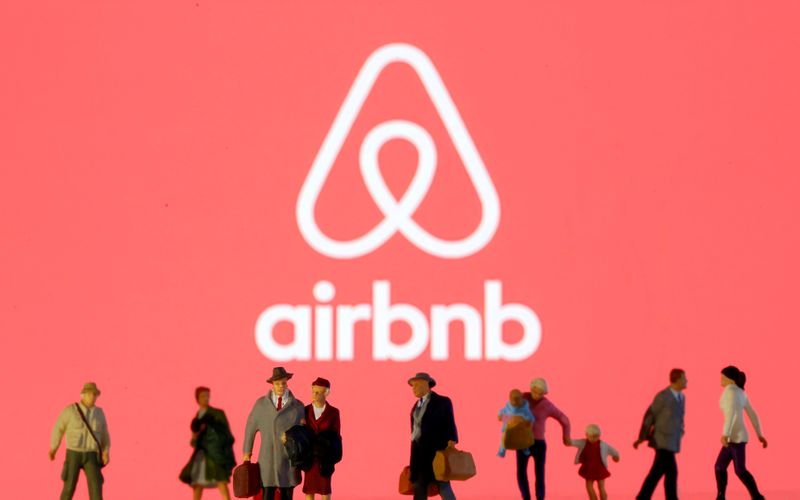 By Joshua Franklin and Chibuike Oguh

(Reuters) -Airbnb Inc on Wednesday sold shares in its initial public offering (IPO) on Wednesday at $68 apiece, above its targeted price range, to raise around $3.5 billion, according to a person familiar with the matter.

The IPO gives Airbnb a fully diluted valuation – which includes securities such as options and restricted stock units – of $47.3 billion, capping a turnaround in fortunes for the U.S. home rental firm that was hit hard by travel restrictions used to curb the COVID-19 pandemic.

Airbnb had planned to sell around 51 million shares at $56 to $60 apiece, having raised this range from an earlier target of $44 to $50 per share.

Airbnb's IPO is the biggest by a U.S. operating company in 2020 in what has been an active year for U.S. listings, with the likes of tech companies DoorDash Inc and Snowflake Inc going public.

The share offering also marks a dramatic comeback for Airbnb after it suffered a sharp drop in bookings and an increase in cancellations as the coronavirus spread across the world nine months ago, forcing governments to impose travel bans and mandate social distancing guidelines.

In April, Airbnb raised $1 billion from private equity firms Silver Lake and Sixth Street Partners as it sought to boost its cash reserves amid a decline in revenue. That fundraising valued Airbnb at $18 billion, below its $26 billion valuation in early March before the pandemic began, a source told Reuters.

Airbnb had also launched a string of cost-cutting measures, including pausing hiring, suspending marketing activities, and slashing executive pay, in an effort to save up to $800 million this year, sources told Reuters.

But as lockdowns eased and with more travelers opting to book homes instead of hotels, Airbnb's revenue rebounded from a summer slump to reach $1.34 billion in the third quarter. The company also posted a surprise profit of $219.3 million, down slightly from $266.7 million last year.

Airbnb was founded in 2008 by Brian Chesky and Joe Gebbia as a website to take bookings for rooms during conferences, including the Democratic National Convention that year in Denver. Some of Airbnb's investors include venture capital firms Sequoia Capital and Andreessen Horowitz; Hollywood actor Ashton Kutcher; buyout firms General Atlantic, TPG, Hillhouse Capital; and investment management firms Vanguard Group and Fidelity Investments.

The company's shares are scheduled to start trading on Nasdaq on Thursday under the ticker "ABNB."