At this point ahead of a long weekend it doesn’t seem like there’s much appetite to extend record gains.

Normally ahead of a three-day break you’d expect to see some profit-taking after record highs. While there might be some of that going on, it seems like a fear of missing out on further gains is keeping downward pressure in check.

The market has been on a record run as earnings season has generally been better than analysts had forecast, and the stronger-than-expected bottom-line performances, expectations of stimulus, decreasing virus counts, and vaccine optimism have helped propel Wall Street to record highs.

Yesterday, the Information Technology sector was the day’s best performer, gaining more than 1%, while all the other sectors were either in the red or posted much slighter rises. Chip-makers and payments companies did well.

After the closing bell yesterday, Walt Disney (NYSE:DIS) opened its books to reveal earnings that hit the cover off the ball. Analysts had expected a loss, but the entertainment conglomerate ended up well in the black on revenue of $16.25 billion, which was also above analysts forecasts.

DIS has been an interesting company to watch during the pandemic because it’s basically a hybrid of the stay-at-home trade and the reopening trade. The pandemic has hit its legacy businesses that include its flagship theme parks—that went offline for a while last year and have been in “phased reopening” mode ever since. But DIS is also a heavyweight in the entertainment streaming business, meaning that it’s been benefiting as people have entertained themselves at home during lockdowns.

It’s this second part—and particularly the strong subscriber growth numbers in the company’s streaming division—that helped DIS report a profit of $0.32 per share, vs. consensus that was expecting a loss of $0.41 per share. DIS said that as of the start of 2021, it had almost 95 million paid subscribers to its Disney+ streaming service. Growth there might be helping to make up for weakness in other segments like theme parks and cruises, which have been hurt by the pandemic.

Today’s earnings schedule looks relatively quiet. After the federal holiday Monday, next week’s earnings include Hilton (NYSE:HLT), Marriott (NASDAQ:MAR) and Hyatt Hotels (NYSE:). These stocks are ones some analysts believe can do better as travel, along with the economy, recovers. So it could be interesting to hear what their executives are currently thinking about the state of things as the pandemic continues.

On the other end of the spectrum, investors are scheduled to hear from the stay-at-home trade when Shopify (NYSE:SHOP) opens its books. The company has been helped as the pandemic has accelerated the move toward e-commerce.

Retail giant Walmart (NYSE:WMT) and equipment manufacturer Deere (NYSE:DE) are also scheduled to report, likely providing a glimpse into their respective parts of the economy. WMT could shed light on how lower-income shoppers are doing while DE could help investors get a clearer picture of what’s happening with agriculture and manufacturing.

On the economic data front, next week is scheduled to hold some high profile reports. After a relatively light Tuesday, Wednesday’s schedule includes January retail sales figures as well as January producer price data. Later that day, the Fed is scheduled to release the minutes from its January Federal Open Market Committee meeting. (See more on the Fed below.)

We’re also scheduled to get new glimpses into the housing market with the release of January data for housing starts, building permits, and existing home sales. It could be interesting to see how low interest rates as well as higher prices caused by tight supply have continued to affect the housing market. 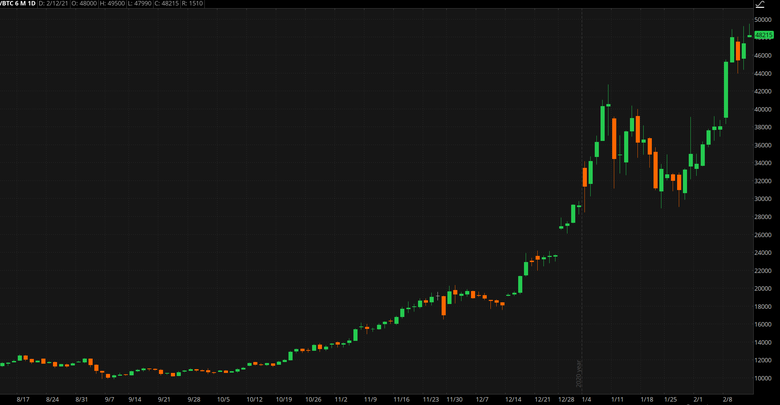 CHART OF THE DAY: THIS IS A RECORDING: Bitcoin futures (/BTC—candlestick) hit another record high after news of moves in the cryptocurrency space by Mastercard (NYSE:MA) and Bank of New York Mellon (NYSE:BK). Other Wall Street institutions have also been piling in. As interest continues to grow it seems likely that extreme volatility could continue. Data source: CME Group (NASDAQ:). Chart source: The thinkorswim® platform from TD Ameritrade (NASDAQ:AMTD). For illustrative purposes only. Past performance does not guarantee future results.

More Support For Crypto: Yesterday, Mastercard (NYSE:MA) shares gained nearly 2.6% after the payments company said it has plans to support select cryptocurrencies on its network, jumping on the wagon of other high-profile moves in the space as the market matures. In other crypto news, Bank of New York Mellon (NYSE:BK) said it planned to create a digital assets service. The news from both companies helped push bitcoin to a fresh all time high. That comes after the cryptocurrency market has gotten help from other heavyweights such as BlackRock (NYSE:BLK), CME Group (NASDAQ:CME) and Tesla (NASDAQ:TSLA). It’s probably worth keeping in mind that the cryptocurrency market tends to be quite volatile. Some see it as the wild west of investing right now, with the potential to win—but also lose—big.

Sentiment Check: The University of Michigan preliminary consumer sentiment report for February is due out later this morning. The final January reading was 79.0, down from 80.7 in December. Analysts are looking for the first February reading to come in at 80.8, according to research firm Briefing.com. A question is whether recent weak labor market data and the relatively slow start to vaccinations might start weighing on sentiment. Last time around, Briefing.com had this to say about the report: “Sentiment held relatively steady in January despite rising coronavirus cases/deaths, the insurrection, the impeachment … and a deterioration in the labor market.” If consumer sentiment can remain resilient in the face of those problems, maybe things will look up now that virus cases are on the decline and things have calmed down politically.

Counting The Minutes: Investors are scheduled to get another peek into the mind of the Fed next week when it releases the minutes from its January Federal Open Market Committee meeting. If you recall, the central bank left the Fed funds rate at 0%–0.25% last month, and offered reassurances that monetary policy makers will continue to support the economy’s recovery with low rates and bond purchases. Fed Chairman Jerome Powell this week said the Fed remains committed to near-zero interest rates and $120 billion a month in asset purchases. Even with the unsurprising comments about rates remaining near zero and bond-purchase tapering probably not an issue in the near future, it could be interesting for investors to peruse the minutes to try to glean further insight into the Fed’s thinking about the pandemic and the prospects for economic recovery.