Lockheed Martin (NYSE:LMT) is one of those companies quietly going about business while the market is focused on higher-profile and more pandemically-centric names. While Lockheed Martin’s defense and aerospace-centric business is neither fueled nor hampered by the pandemic, other than general shutdowns and etc, much of it (virtually 100%) is also considered essential. What I’m getting at is Lockheed’s revenue and earnings growth did not miss a beat in 2020 and the outlook for 2021 is very bright. Add in the value, the dividend, and the technical picture and this stock becomes a compelling addition for any watchlist.

1) Lockheed Just Nabbed $3 Billion In New Contracts – Over the course of the last month Lockheed scored not one but at least five major contracts worth more than $3 billion in future revenue. The largest and most visible is a recently announced contract with the Navy worth $1.29 billion. The contract is for recurring logistics services including maintainability in relation to the F-35 Lightning II Joint Strike Fighter system. Other contracts include $0.900 billion to maintain and modify the F-16 fleet, $0.507 billion to work on the Army’s helicopters, and another $0.11 billion from the Navy.

2) Lockheed Martin Is Positioning For Space – Lockheed Martin has long been involved with the U.S. space program but the times how they are changing. Now, instead of a near competitionless environment, the company is facing increased competition not only from its traditional rivals but from newer startups as well. So that’s why it’s been making moves to gain market share within the industry, the latest is the acquisition of Rocket Dyne. The deal is worth $4.4 billion and gives Lockheed exposure to the rocket propulsion segment. The purchase of Rocket Dyne also makes sense because the company builds the rockets used on Lockheed’s deep-space shuttle.

3) Lockheed Martin Provides A Deep Value – Lockheed Martin provides a deep value trading at 14.5X this year’s and 13.5X next year’s earnings, and that valuation is misleading. The company beats the consensus about 90% of the time, often by wide margins, which means the consensus estimate for Q4 earnings is too low. Add in all these new contracts and the outlook for mid to high-single-digit revenue growth is too low as well making the value even deeper.

4) Lockheed Martin Is A High-Yield Dividend Growth Stock – Lockheed Martin pays a dividend-yielding about 2.95% with shares trading at $356. That’s more than double the broad market average and as safe as a dividend can be. The payout ratio is running about 42% of this year’s consensus earnings (a consensus that is too low) and the balance sheet is in great shape. The company carries some debt but it’s all long-term, there are no overshadowing maturities looming, cash and coverage are high, and FCF is ample. What investors should expect is the 20th consecutive double-digit dividend increase later in 2021.

Shares of Lockheed Martin have been lagging the broad market all year and that is surprising. The company offers a deep value, is producing a modest high-single-digit growth rate, has a robust outlook, and pays a great dividend. What is not surprising is that price action has put in a solid bottom that could propel it to new highs very soon. Price action is still below the short-term moving average but bouncing higher and showing bullish signals in the indicators. Both stochastic and MACD are firing bullish crossovers that confirm support and point to at least a test of the 30-day EMA. If price action can get above the EMA a move to the $380 and then $400 level comes into play. Resistance at the $400 level may be strong. 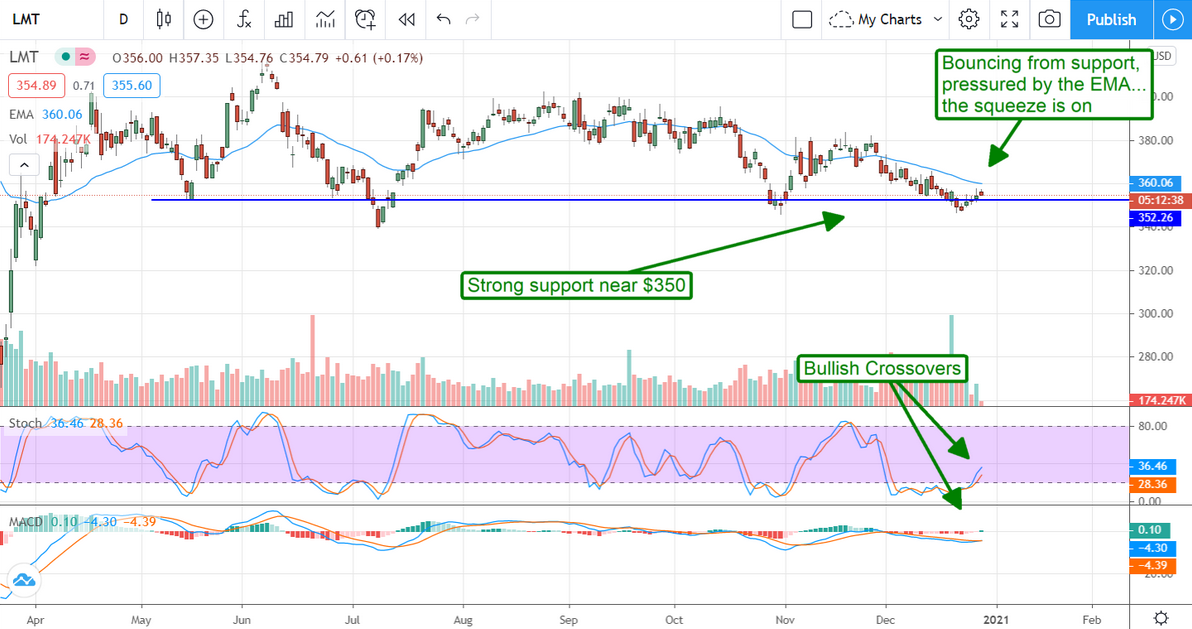