Most investors are ignoring a clear shot at 7%+ dividends double-digit price gains—year in and year out—in a sector everyone should be talking about, but isn’t.

That would be healthcare, which is riding a rocket of rising spending: according to the latest numbers from the Centers for Medicare & Medicaid Services, US health expenditures will soar 5.4% annually, on average, every year until 2028. (We’ll dive into three funds paying huge dividends up to 8.3% and poised to cash in on this wave in a moment.)

The thing about that 5.4% yearly increase is that it’s much bigger than projected US GDP growth of 4%. Yet the market is behaving like healthcare is in its sickbed: pharma’s main benchmark ETF, Health Care Select Sector SPDR® Fund (NYSE:), is trailing well behind the this year. 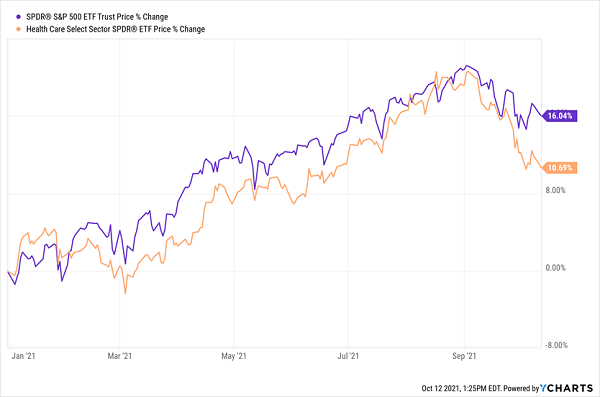 I’ve been pounding the table on this disconnect in my CEF Insider service for a while now. And CEF Insider members will of course know that we’ve taken advantage of rising healthcare demand with two closed-end funds (CEFs) throwing off 8.2%+ dividends—Tekla Life Sciences Investors (NYSE:) and Tekla Healthcare Investors (NYSE:).

Both have given our CEF Insider portfolio a solid grounding, with both funds returning around 45%, mostly as dividends, since we bought them in 2017 and 2018, respectively. And as we’ll discuss further on, they sport some critical advantages (not least being their huge, stable dividends) that set them up for even stronger gains in the coming healthcare renaissance.

Tekla is a healthcare-only investment firm with a few CEFs on the market. The company employs a team of former bioengineers and lab scientists, and as a result, often learns of breakout medical tech before anyone else, which is why they’ve put out some of the best-performing CEFs of all time.

HQH and HQL aren’t the only games in town, either. Here are three others that don’t currently sit in our CEF Insider portfolio but are still positioned to benefit from rising demand for healthcare. To make it easier for you to sift through them, I’ve ranked these three picks from worst to first:

Our No. 3 pick, Tekla World Healthcare Fund (NYSE:), also comes from Tekla, and it demonstrates how even terrific managers can have the odd strikeout every now and then.

THW catches attention mainly because of its 8.6% yield, which is big even for CEFs, whose average yield is an already large 6.8%. THW is a much more global fund than HQH or HQL (or the other two funds we’ll cover below), with top holdings such as AstraZeneca PLC (NASDAQ:), Roche Holding (OTC:), and Medtronic (NYSE:).

Those are all great companies, but when it comes to pharma, we want to keep our focus on the US, which is the world’s biggest healthcare spender, with a forecast 35% share of global healthcare spending in 2028, according to Statista.

But even if THW’s portfolio were better aligned with our US focus, we’d be turned off by the fact that the fund trades at a high 8% premium to net asset value (NAV, or the value of the stocks in its portfolio). That big premium could cap the fund’s upside, and THW’s track record is already a bit weak since inception six years ago, with a total NAV return (or the performance of its underlying portfolio) of 41.5%, which isn’t quite enough to sustain its payouts.

Despite that, THW carries a premium because CEF investors often bid up a fund based solely on its yield. We contrarian income-seekers, of course, know better than to fall into that trap.

BlackRock Health Sciences Trust (NYSE:), which yields 5% as I write this, is as close to a “popular” healthcare fund as you’ll find in the still-obscure world of CEFs. There are two reasons for that: one is that it’s run by BlackRock (NYSE:), the world’s biggest investment firm, with more than $7 trillion in assets under management, and the other is BME’s portfolio, which is a who’s-who of US blue chip pharma firms, including UnitedHealth Group (NYSE:), Abbott Labs (NYSE:), Eli Lilly (NYSE:), and Johnson & Johnson (NYSE:).

Better still, management has nicely leveraged its many strengths, helping BME deliver a market-crushing 635% total return since inception, well above the 467% return put up by the benchmark pharma ETF, XLV: 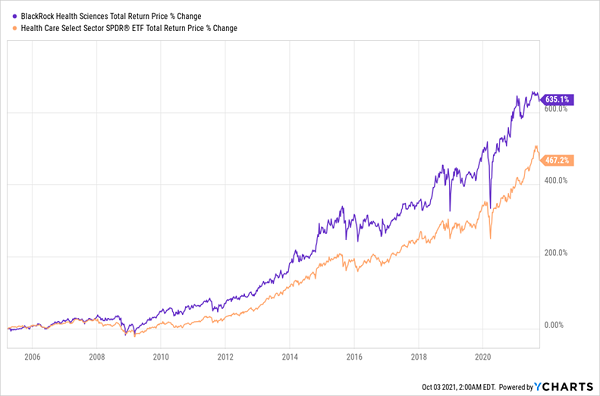 So we’ve got a smart management team, near-bottomless research resources with BlackRock and outstanding performance. Why is this only our second-best option? you may be thinking.

The first reason is the dividend: BME’s 5% yield is okay, better than pretty well any payout you’d find on an individual pharma stock. But it’s still far below the 6.8% CEF average. The other? Everyone knows BME is the cool kid in class, which is why it trades at a 2% premium to NAV.

So let’s set BME aside for now (and keep an eye on it until it drops to a significant discount) and move on to our first-place finisher.

For that, we’re going back to Tekla, with the 6%-yielding Tekla Healthcare Opportunities Fund (NYSE:). Its top holdings are similar to those of BME, with slightly more emphasis on health insurers such as Cigna Corp. (NYSE:).

But the most exciting aspect of THQ is its pricing. At a 3% discount, it’s cheaper than almost any other healthcare CEF and below the 1.9% average discount for all CEFs. That makes it even more likely that THQ will outperform as its discount swings to a premium.

So THQ’s cheaper pricing sets it up for outperformance, plus it’s got a bigger yield. Those are two reasons why it wins out among these three non-CEF Insider healthcare picks. And there’s a bigger reason, too: anyone picking up THQ now would be doing so just as its portfolio gains momentum—the perfect time to buy. 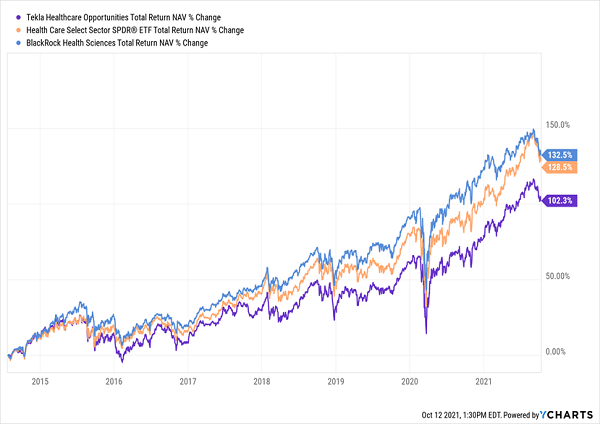 When we compare BME (in blue above), THQ (in purple) and the benchmark ETF, XLV (in orange), on a NAV-return basis, we see that THQ trails the other two since its inception, but it is showing relative strength this year, as it’s reeled in the other two. Let’s zoom in on these funds’ 2021 performance:

THQ Comes Out Ahead 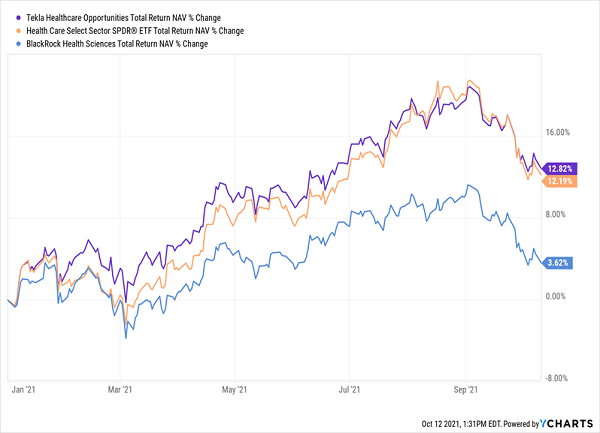 Clearly, THQ is coming into its own, and its attractive discount makes it the winner of our trio.