Every investor knows that you can’t look to a stock’s past performance as predictor of future gains. It’s become axiom, even, one of the stock phrases that we all learn about in Econ 101: ‘Past performance does not guarantee future returns’ is common formulation. But that simple phrase, while true, raises a tough question: How should an investor judge a stock?

The truth is, past is prologue, not prophet, and investors can profit by taking past performance as one of many factors in evaluating a stock. There’s no one sure path to success here, and every stock should considered as a unique individual – which makes past performance a useful indicator, even if it’s not the only one.

Investors should also look for Wall Street’s view – are the analysts impressed by the stock? And in addition to that, how does the upside potential look like?

Now we have useful profile for monster growth stocks: gangbusters gains, Buy ratings from the Wall Street analyst corps, and considerable upside for the coming year. Three stocks in the Investing Insights platform are flagging all those signs of strong forward growth. If that’s not enough, all three have a ‘Perfect 10’ smart score.

The platform gives every stock a single-digit score, based on a summing up from 6 separate factors. The factors used are known to correlate with future overperformance; when they align together it’s a strong indication for buyers to consider. Let’s take a closer look.

Say ‘biotech,’ and most people will assume you’re talking about pharmaceuticals. But Amyris (NASDAQ:AMRS) puts a different twist on the biotech industry. The company focuses on developing synthetic chemical replacements for common petroleum-, plant-, and animal-based products. Amyris operates three development divisions for cosmetics, health & wellness, and food flavorings, which are offered to the public through three direct-to-consumer brands: Pipette, Biossance, and Purecane.

AMRS shares have shown rapid growth recently, taking off in the past six months. During that time, the company’s stock is up 786%, impressive by any standard. The company’s growth has accelerated in recent months, and a look at the recent 4Q20 earnings report will give some reasons.

Q4 marked the third consecutive quarter of record product sales. The company reported $80 million in total sales, more than doubling the previous quarter’s result. Of that total, the $35 million in product revenue was up 71% year-over-year. The company also saw a significant yoy increase in gross margins, from 56% to 66%. The increasing sales let to full-year revenues of $173 million, a 13% year-over-year gain.

Looking ahead to the end of 2021, the company guides toward continued increasing product sales leading to full-year total revenue near $400 million, well above the consensus forecast of $231 million.

“Long-term growth is underpinned by a strong pipeline of new molecules in development with strategic partners. With the 13 ingredients in the market, and 18 in active development, we expect continued healthy portfolio expansion as these come to market through 2025. Mgmt expects to add another 8 to 10 ingredients to the active development pipeline in 2021, maintaining a broad channel for expanding long-term product and ingredient potential,” Irwin opined.

Unsurprisingly, Irwin rates AMRS as a Buy, and his $33 price target implies a 59% upside potential in the next 12 months.

Fast-paced growth will always attract Wall Street’s analysts to an innovator. Amyris has picked up 4 recent Buy reviews, all coalescing to a Strong Buy consensus rating. AMRS has a share price of $20.65, and even after its recent appreciation, the $25.50 average price target still suggests a 23% one-year upside. (See AMRS stock analysis) 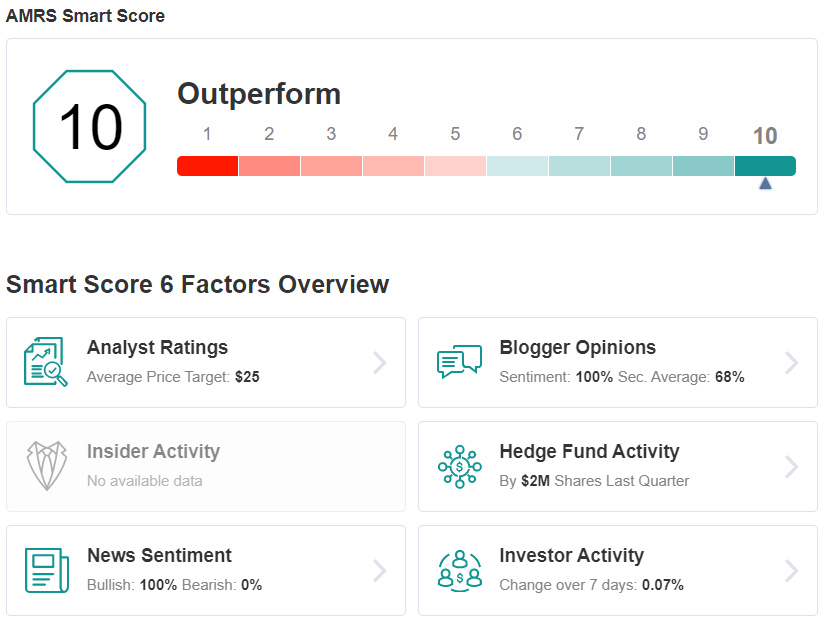 The next growth stock we’re looking at inhabits the renewable fuel industry. This is a sector that is growing partly on political cachet – renewable are an ‘in’ thing – and partly on the strength of the business model. Clean Energy Fuels (NASDAQ:CLNE) produces renewable natural gas (RNG) for transportation purposes. The company’s fuel products are marketed to transit and transport customers; among Clean Energy’s customers are Estes Express Lines, UPS, and the New York City MTA.

In early February, Clean Energy announced a major multi-year contract to provide the LA County Metro system – the largest bus fleet in the US – with 47.5 million gallons of RNG. The agreement is part of a move by the LA Metro to low-carbon fuels. Clean Energy was awarded three fueling depots for five years, with an option to extend the contract for an additional three years. This is in addition to five fueling depos with Clean Energy already operates for Metro.

The LA Metro news came out after CLNE shares had been showing explosive recent growth, part of a general trajectory that has seen the stock rise 492% over the past 6 months. That rise has coincided with several other recent contracts, totaling over 58 million gallons of RNG. Customers include Pacific Green Trucking and Waste Connections (NYSE:WCN) WCN.

Craig-Hallum analyst Eric Stine, rated 5-stars at TipRanks, writes of Clean Energy: “We think it is becoming increasingly clear that natural gas (and RNG) is going to be a critical fuel as part of the de-carbonization of transportation with Amazon’s initial deployment an exclamation point. With CLNE’s dominant position and RNG plans, the significant financial impact of RNG which is amplified by the increased contribution of low-CI RNG, and the most expansive station footprint, we see CLNE as an ideal investment in natural gas and also note it is one of the few pure play investments in renewable natural gas.”

In light of his bullish comments, Stine puts a Buy rating and a $25 price target on CLNE. His target indicates confidence in 68% growth for the year ahead.

Overall, Wall Street’s analysts are sanguine about this stock’s ability to continue melting up to new highs. CLNE’s Strong Buy consensus rating is based on 3 Buys and 1 Hold. It doesn’t hurt that its $23 average price target puts the potential twelve-month rise at ~55%. (See CLNE stock analysis) 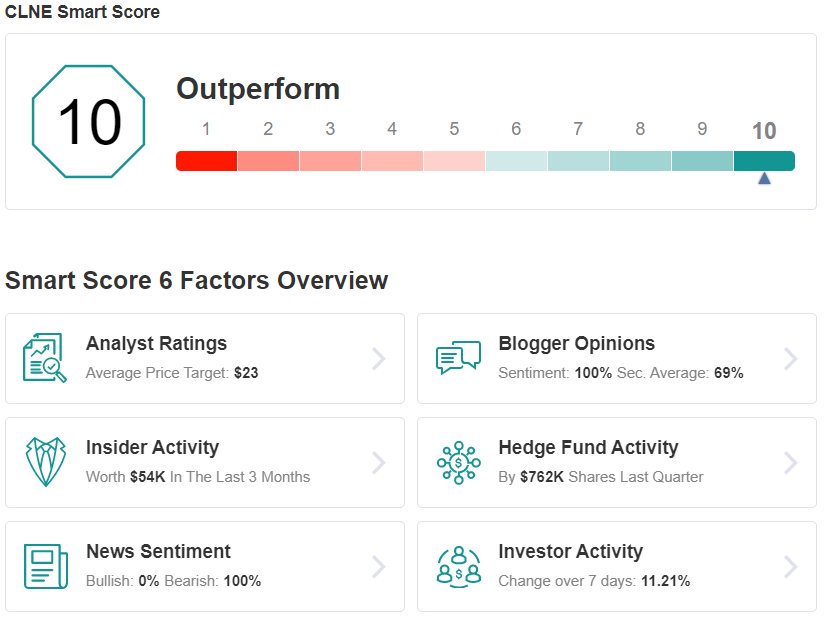 Aemetis (NASDAQ:AMTX) is another company focusing on renewable fuels. Aemetis’ main products are ethanol and biodiesel, along with glycerin, an important industrial chemical. The company doesn’t rest on one sector, however, and has a broad production portfolio that also includes distiller’s grains, edible oils, and palm olein, and other food products. Aemetis markets heavily in India’s food sector and the California Central Valley.

Aemetis’ shares have shown robust recent growth, with a net gain of 736% year-to-date. A significant portion of that gain has come after the company’s announcement that it will be starting a ‘Carbon Zero’ plant to produce renewable truck and jet fuels, with a capacity of 23 million gallons per year. The company has also published a five-year growth plan targeting $1 billion in total revenue by 2025.

Aemetis reported 4Q20 results earlier this month, and despite losses year-over-year the company was able to put a positive spin on the results. The report noted that, even though 2020 saw serious demand disruptions, ethanol and fuel-grade alcohol revenues came in at $112 million, just $3 million less than the prior year.

Amit Dayal, rated #9 overall among Wall Street analysts, takes note of all of this in his recent coverage of AMTX.

“We believe the company is emerging as one of the leaders in implementing a zero-to-negative carbon intensity (CI) strategy to bring renewable fuels to the market that should be supportive of a superior margin profile relative to competitors. We also believe that the company has timed these initiatives well during a very friendly federal regulatory environment, improving the probability of success,” Dayal wrote.

To this end, Dayal puts a $28 price target on the stock, backing his Buy rating and suggesting a 34% one-year growth potential.

AMTX shares have managed to slip under the radar so far, and have only garnered 2 recent reviews. Both agree, however, that this stock is a Buying proposition. The shares are priced at $20.83, with a $26.50 average target that indicates room for 27% growth in by year’s end. (See AMTX stock analysis) 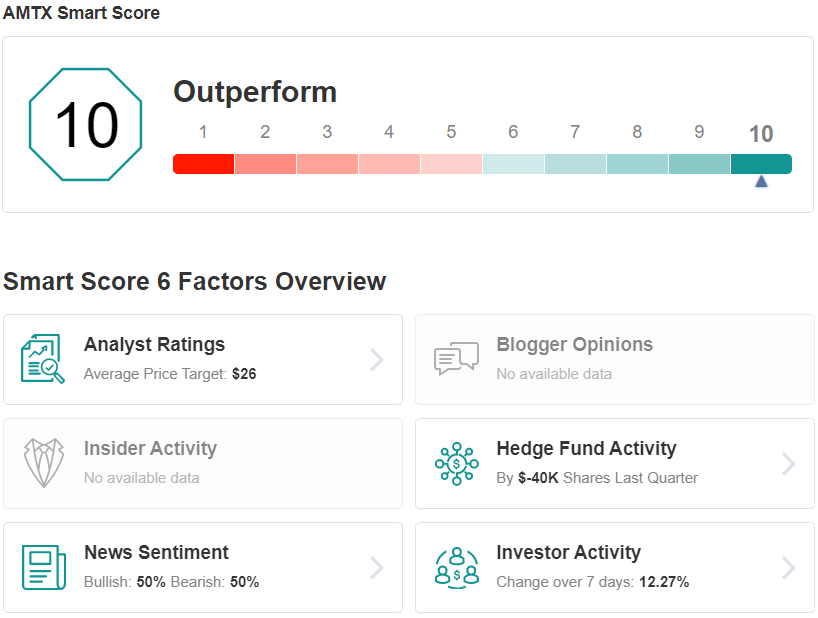