There’s a lot of talk about worry coming into play lately. Wall Street watchers are talking about inflationary fears, too much government spending, impending tax increases, rising Treasury bond rates – all signals that should bode ill for the stock markets. Covering the markets for Credit Suisse (SIX:CSGN) CSGN, however, US equity strategist Jonathan Golub thinks the fears are overblown – at least for the short term. He believes that the S&P 500 has more room to run, and expects gains to continue for the rest of this year.

In other words, the actual technology behind the tech stocks is simply better than it was 20 years ago – and is providing more value to boost the shares.

Bearing this in mind, we set out to find stocks flagged as exciting growth plays by Wall Street. It’s a cliché to remind everyone that past performance does not guarantee future results, but when a stock consistently shows strong share appreciation, over an extended period, it’s a positive sign for investors.

Using the Investing Insights platform, we locked in on three analyst-backed names that have already notched impressive gains and boast strong growth narratives for the long-term. Importantly, these stocks also score a ‘Perfect 10’ smart score.

The platform gives every stock a single-digit score, based on a summing up from 6 separate factors. The factors used are known to correlate with future overperformance; when they align together it’s a strong indication for buyers to consider. Let’s take a closer look.

Bio-refining is big business; much of our economy runs on biologically and agriculturally derived products, and Green Plains saw $1.95 billion in total revenue last year. At that, the top line was down 32% from 2019, mainly due to demand issues caused by the corona crisis. The company reported lower production run rates, lower ethanol prices, and lower export volumes for the full year. The fourth quarter, the most recently reported, saw a 33% drop in revenues, with a top line of $478.8 million.

The main problem facing Green Plains is less corona than political. Ethanol prices are down due to oversupply. While that glut is partly due to lower demand last year, it is also due to increased production on the expectation that, with the Democrats ascendent in Washington at least in part on a ‘green’ platform, there will be governmental mandates for more biofuels. That has not yet materialized.

Despite the slower business, Green Plains stock has soared 448% in the past 12 months. This raises the question: Why? At least one answer may come from a shift in production priorities.

Green Plains’ management is steering the company’s production toward Ultra-High Protein technology, as a way of enhancing the value of corn-based food product additives. The technology shows promise to increase the value of acreage planted, as measured in usable nutrition. In April of last year, the Green Plains delivered the first of ongoing shipments of ultra-high protein product from its Shenandoah, Iowa production facility.

5-star analyst Craig Irwin, of Roth Capital, sees the shift to high-protein as the key point for this stock.

“We see the weak ethanol crush margins in 4Q20 as backwards looking, and focus on initiatives that drive EBITDA growth. The HighPro technology is well understood at this point from Shenandoah, IA coming online in April-20, and mgmt. announced three new plants would move into HighPro construction this year…. GPRE will produce ~380m lb of corn oil after HighPro is adopted… The company’s HighPro tech increases corn oil yields by 50%, and tightening demand could support strong price momentum, in our view,” Irwin opined.

In line with this outlook, Irwin rates the stock as a Buy, and his $43 price target implies a 61% one-year upside to the stock.

Overall, Green Plains currently gets total support from the rest of the Street. GPRE’s Strong Buy consensus rating breaks down into Buys only – 4, in fact. With an average price target of $32, the upside potential comes in at ~20%. (See GPRE stock analysis) 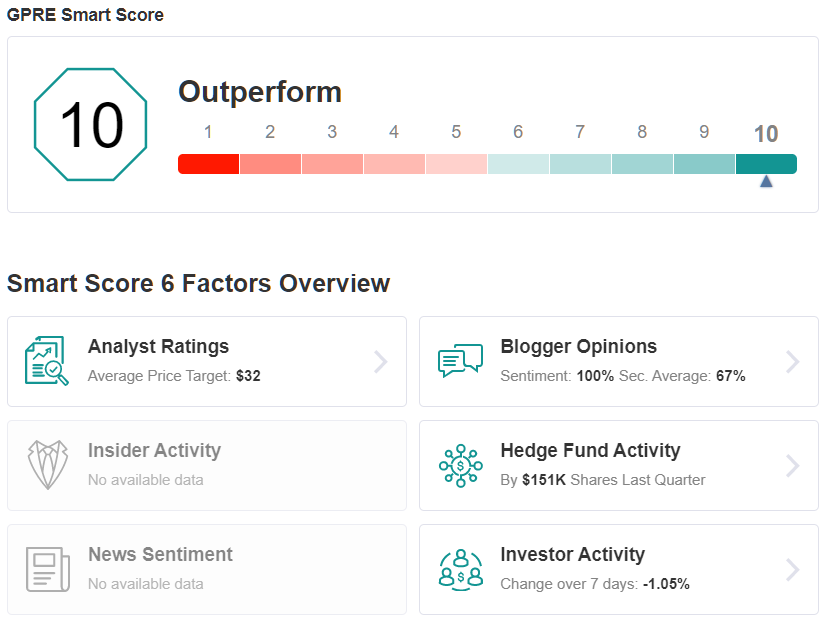 Switching gears, we’ll look at Babcock & Wilcox Enterprises (NYSE:BW), an industrial manufacturer based out of Ohio. The company is known for industrial steam boilers, but in recent years has moved toward greener tech: recycling of biomass and refuse for energy production, and air emissions control systems. The company remains connected to its roots in boiler technology, and is a leader in improving efficiency and cleaning systems for thermal power units.

BW’s industry position, in short, is in demand. The company brings a long history of hands-on know-how to its jobs, and in March of this year announced several new contracts in Europe, the Middle East, and Indonesia. The contracts cover aftermarket parts, service, and maintenance for utility plants, and total over $24 million. On its home turf, BW also announced a $20 million contract for the design and installation of thermal power plant systems in North America.

These new contracts come after a year in which BW’s shares rose dramatically, by 809% in the last 12 months. This gain includes a 42% spike that has occurred in late March, after the new contracts were announced.

Despite the run in share price, at a current market cap of $800 million, B. Riley analyst Alex Rygiel believes BW stock has more room to grow.

“We believe BW has strong climate control/renewable/ environmental tailwinds and, when coupled with its global expansion and a strong pipeline of opportunities, is positioned for strong double-digit revenue growth, margin expansion, and profitability in the coming years…. BW ended 2020 with a total backlog of $535M, as previously announced, which grew 21% Y/Y. The 12-month backlog was $302M with more than 60% expected from the Thermal segment. We expect the backlog to grow through 2021 as some delayed projects, due to COVID, return,” Rygiel wrote.

Along with these upbeat comments, Rygiel gives BW a Buy rating with a $12 price target. His target indicates confidence in 29% growth this year.

Overall, analysts are striking a bullish tone on BW stock. 3 Buys assigned in the last three months add up to a Strong Buy analyst consensus. In addition, the $11.33 average price target puts the potential twelve-month gain at ~22%. (See BW stock analysis on TipRanks) 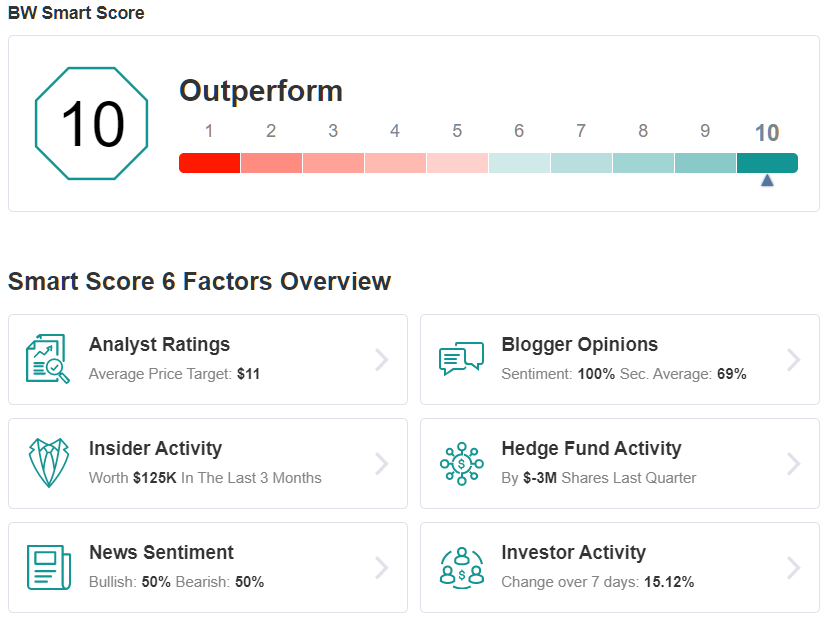 The last growth stock we’re looking at, ClearSign Technologies (NASDAQ:CLIR), has posted 775% share appreciation over the past 12 months. The stock shows the gains possible in a sound penny stock; one year ago, it was trading for just 64 cents per share and now it trades over $5.

The company behind that growth specializes in emissions control technology – which, in today’s political environment of ascending ‘green’ priorities, is a growth industry. ClearSign provides a range of technical solutions to cleaning emissions for a variety of industries: energy, oil and gas, boilers, and chemical processing. ClearSign has its headquarters in Seattle, with regional offices Tulsa, Oklahoma and Beijing, China.

In recent weeks, ClearSign has capped its year of high growth with several new business announcements, including its completed application for firetube boiler burner certification in China, and the concurrent agreement with that country’s leading boiler maker, Jiangsu Shuang Liang Boiler Company, for the provision of next-gen, ultra-low emission, high efficiency integrated boiler burners for the Chinese market. The company expects a government response on the application by the end of 2Q21. At the same time, ClearSign announced that it successfully completed a major three-burner project in California, on contract with an energy infrastructure company. ClearSign also closed a contract with a European refinery customer to design, build, and install a core process burner installation.

Another of the Streets 5-star analysts, Amit Dayal, in his coverage of this stock for H.C. Wainwright, sees the business transaction listed above as game-changing for ClearSign.

“These developments, especially in the China market, have materialized at a faster pace than we had previously anticipated. We believe the company’s partnership with Jiangsu Shuang Liang Boiler Co. Ltd, China’s leading boiler manufacturer with over 700 active sales personnel and sales offices located throughout China, positions ClearSign extremely favorably to take share in a market comprising 350,000 boilers with a size of around $8B. Similarly, we believe the company’s emerging relationship with California Boiler now opens up the U.S. boiler opportunity for the company in a more meaningful way.”

To this end, Dayal gives CLIR a Buy rating along with a $10 price target, suggesting a 76% one-year upside for the shares.

Small-cap stocks don’t always get a lot of analyst attention – they tend to fly under the radar. Dayal’s is the only review on record for this stock, which is trading for $5.65. (See CLIR stock analysis) 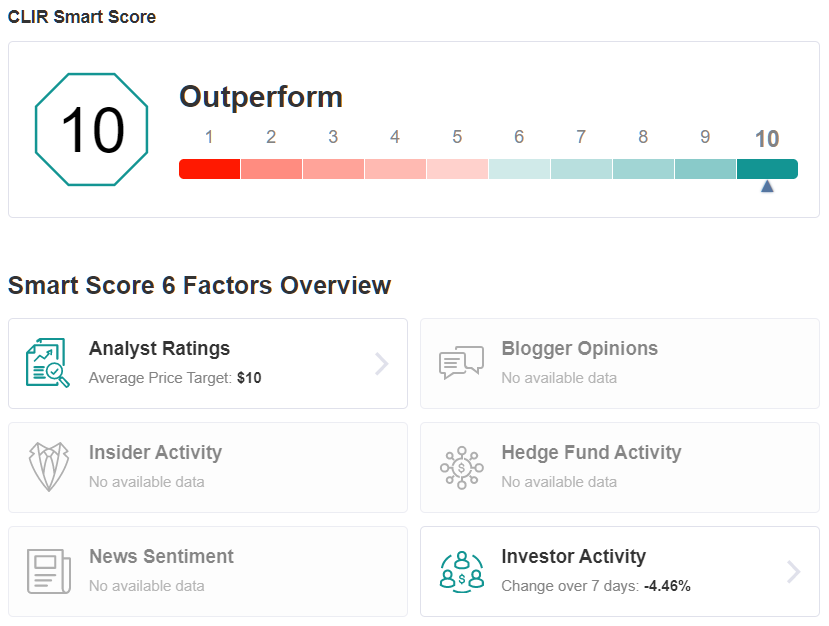