The end of 2020 is fast approaching! (what a year it's been…) Following on from the original "10 Charts to Watch in 2020", the Q1 Update, the Half-Time Update, and Q3 Check-In, here's the final update to the 10 charts to watch in 2020. The key purpose of this article is to update the charts and see how things are tracking relative to where I saw things at the start of the year.

In the original article I shared what I thought would be the 10 most important charts to watch for multi-asset investors in the year ahead.

Obviously a lot… or perhaps more accurately, *everything*, changed as the pandemic became a reality. But in some sense, a number of the themes and opportunities remained the same, or indeed were reinforced following the wild gyrations in markets, and the simply unprecedented global policy response. Indeed, my process tends to shine in times like these, and while it came under grim circumstances I am thankful for the opportunity to have served as a steady hand and voice of reason for my clients.

With that all said, let's get on with the charts!

[Note: I have included the original comments from back at the start of the year, so you can quickly compare what I'm thinking now vs what I said back then]

1. Global Economy: Well, this chart and the original view ultimately proved correct… after traversing a slight divot on the way there. We have by now seen a clear turning point following the global economic shutdown, and we should expect to see some follow-through in the global economic recovery headed into 2021 (but of course there are a few complexities and sources of uncertainty around that view).

"Global Economy – a turning point in the global economic cycle: 2019 basically saw a global manufacturing and export recession. Yes Recession. But looking forward, I have a growing list of leading indicators pointing to a recovery in 2020, and the below is one of them. The diffusion index of OECD leading indicators has made a clear turnaround after reaching a decade low. I will be watching for a turn up in the main global indicator (and for the diffusion index to continue to edge higher/stay higher)." 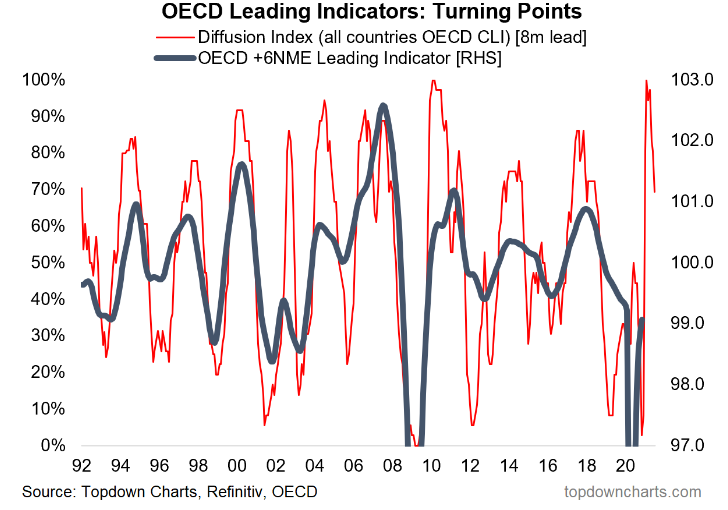 2. Emerging Markets: On a similar note, the EM cycle indicators have indeed started to head up as predicted by the substantial easing of monetary conditions across emerging markets. Again, there was a bit of a detour to say the least… but likewise a big extension of the easing that was already locked-in through 2019.

"Emerging Markets: a big part of the 2020 recovery thesis is the global monetary policy pivot. Not many have noticed, but EM central banks have been particularly aggressive in easing policy (and by the way, they have the most traditional policy ammunition available). Given some of the cycle indicators have already begun to stabilize for EM I have a strong degree of confidence that we will see a cyclical upturn across emerging economies in the coming months and quarters." 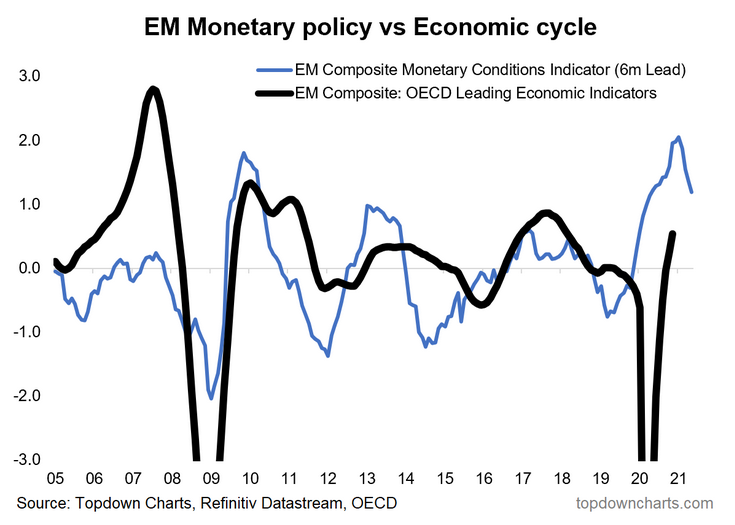 3. Growth Assets vs Defensive Assets: The interesting implication of this chart is that investors still prefer defensive assets over growth assets. This chart was quite helpful back in March/April when the valuation divide became so extreme it basically became one of those cases of "just close your eyes and buy." I guess the only issue with this chart now is that strictly speaking the way to describe it is: defensive assets are expensive, and growth assets are not cheap.

"Growth Assets vs Defensive Assets: this chart says it all in terms of where investors have been positioned, and it tells you that defensive assets may not necessarily be “safe” given such expensive valuations. Indeed, a global economic rebound could well make defensive assets a source of risk, rather than a hedge of risk." 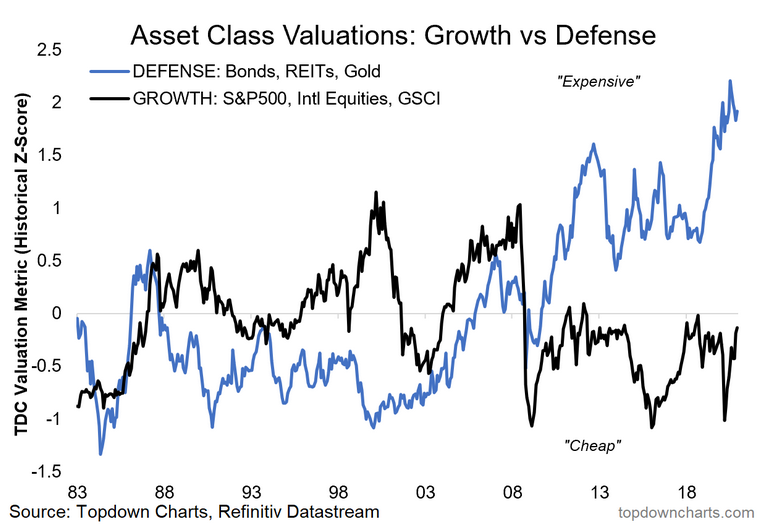 4. TIPS breakevens: If you liked breakevens at the start of the year, you would have loved them in March! Again, we got there in the end, but with the opportunity to add and double-down (and I certainly doubled-down in terms of the bullish stance as valuations became extreme cheap in the midst of the panic).

"TIPS breakevens look cheap, and should rebound if we get better growth. This will also tend to put upward pressure on bond yields (i.e. nominal yield = real yield + inflation expectations). This is closely tied in with the commodities picture [chart 7]." 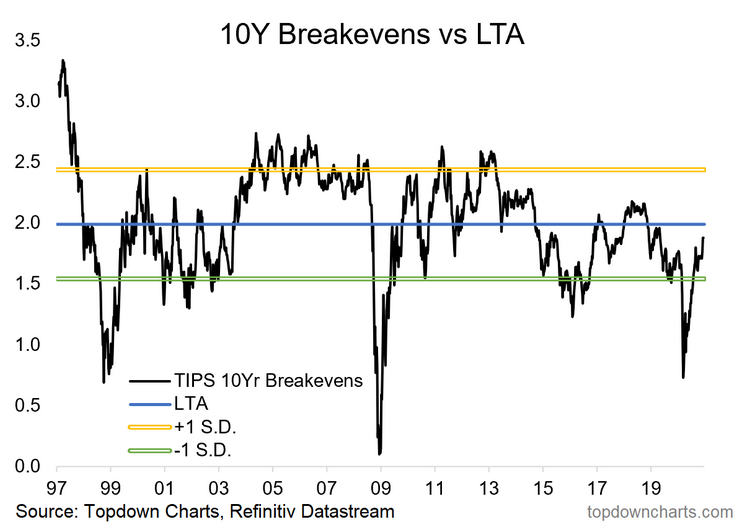 5. US Equity Valuations: Still stubbornly low bond yields have meant that while US equities look extremely expensive in absolute terms, on an ERP basis they still look reasonable. It makes for a complicated outlook, especially as there remains significant variation in valuation across sectors/styles/size and vs the rest of the world.

"US Equity Valuations: the downside of likely higher bond yields is that all else equal it will squeeze the ERP (equity risk premium), which in contrast to absolute valuations, still looks cheap/attractive. Indeed, you can argue it's quite rational to be bullish equities even as absolute valuations are historically high if the equity risk premium provides enough of a cushion." 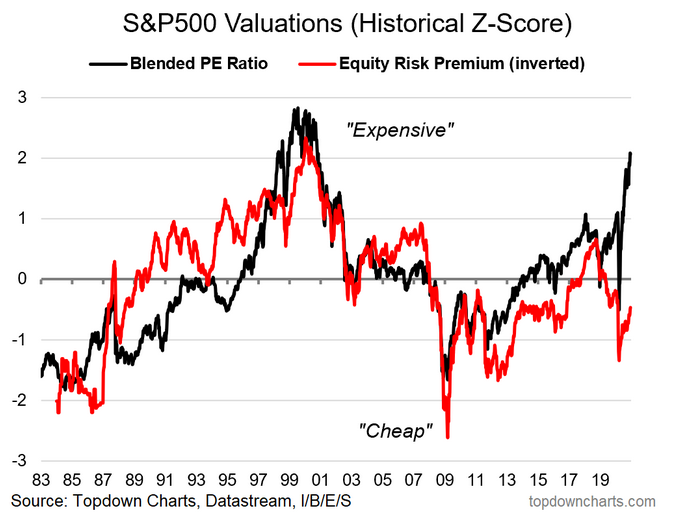 "Global Equities: it looks like we’re in a new cyclical bull market (based on a fairly familiar and reliable global equity market breadth signal). This chart and a few other global equity market breadth indicators helped pick the big breakout late last year. It's quite likely that if the new cyclical bull market does get derailed somehow, that we see early warning signs show up in this chart. So this will be a key one to watch for risk asset allocations." 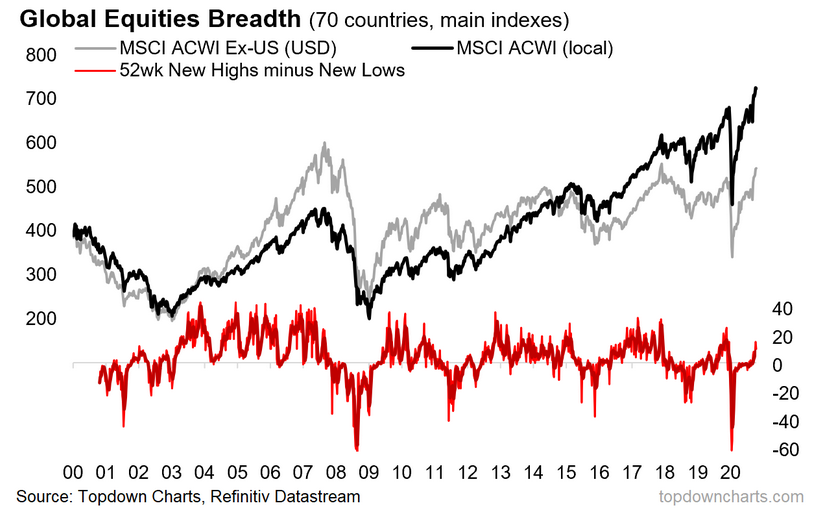 7. Commodities: I remain bullish on commodities, but now there are a few more things to think about: for one, the massive global policy response creates very real medium-term upside risk for commodities, but also the pandemic has disrupted supply both on a short-term basis (e.g. mine disruption, logistics issues), and further out in terms of new capex projects. Add to that increasing focus on issues like zero carbon (the road to which will be paved by a commodity bull market as infrastructure and capex requirements are huge), and the existing set of cyclical bullish evidence, it looks pretty interesting to me…

"Commodities (at an asset class level) have also seen a familiar market breadth pattern emerge, which points to a cyclical bull market (lines up with relatively light positioning, cheap valuations, and a prospective better macro backdrop). The outlook across the individual commodities that make up this index is a bit more nuanced, but the aggregate/asset class view looks fairly straightforward based on the sum of evidence from our indicator set." 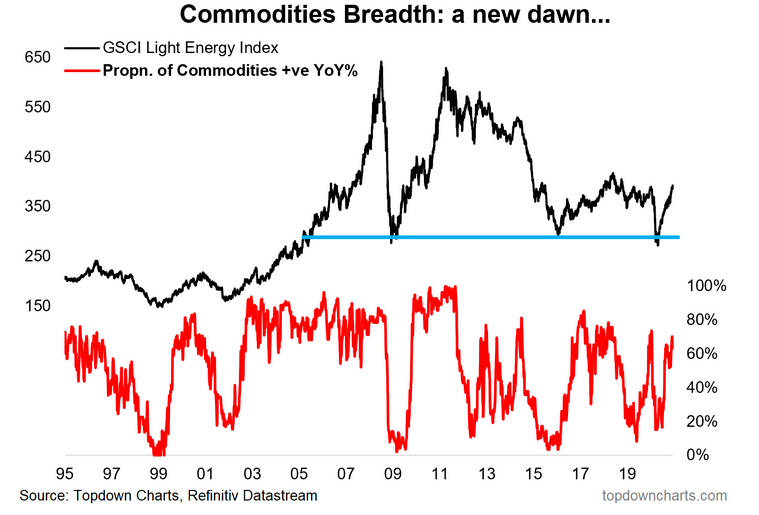 8. FX Volatility: Nailed it on this one, kind of. Didn't predict what would make it happen, but certainly flagged the prospect for a surge in FX volatility from previous crunch. And indeed, it appears to have been the bell-ringer for a turning point in the US dollar. At this stage it looks like the US dollar index has entered into a bear market.

"FX Volatility: one key piece of the puzzle for commodities is the US dollar, and while I continue to maintain a bearish bias there, one thing I am very mindful of is the crunch in FX volatility. Typically crunches in volatility like this tend to be resolved in a violent fashion: that is, it could be a harbinger of a large/rapid move (agnostic of direction). So, will 2020 bring a return of volatility for the US dollar?" 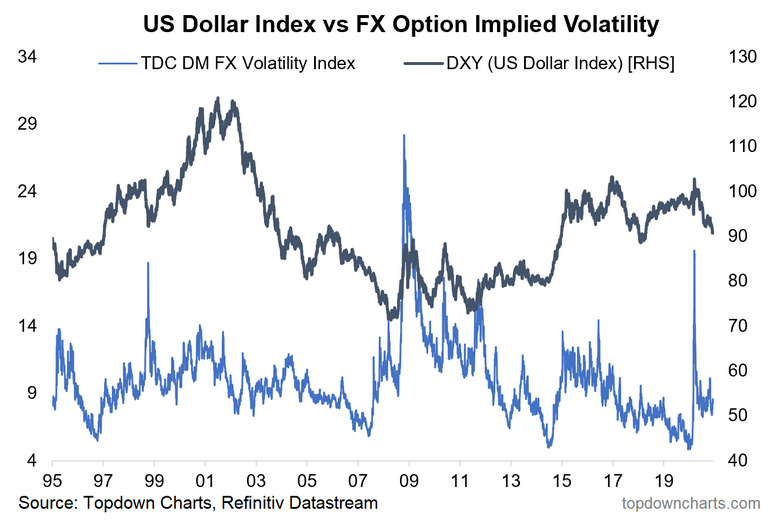 9. Value vs Growth: From bouncing along the bottom to falling off a cliff, US value vs growth was a notable casualty of the pandemic as the tech-dominated growth side of the equation got a boost from basically a one-off acceleration of existing trends (e.g. work from home, ecommerce, internet TV, social media, online meetings, etc etc). But the time now seems right for value to make a comeback as the more cyclically sensitive energy and financials get a boost from normalization and perhaps at least a tapering-off for tech.

"Value vs Growth: the investment strategy graveyard is littered with failed calls for a turnaround in the performance of value vs growth stocks. But I think we could be close to the much-awaited and much-forecast turning point. Relative value between the two cohorts is at the lowest point in 20 years, and in terms of macro catalysts, my expectations for higher bond yields, better growth, and higher commodity prices will help the sectors that are slightly over-represented in value vs growth. So don't forget about value." 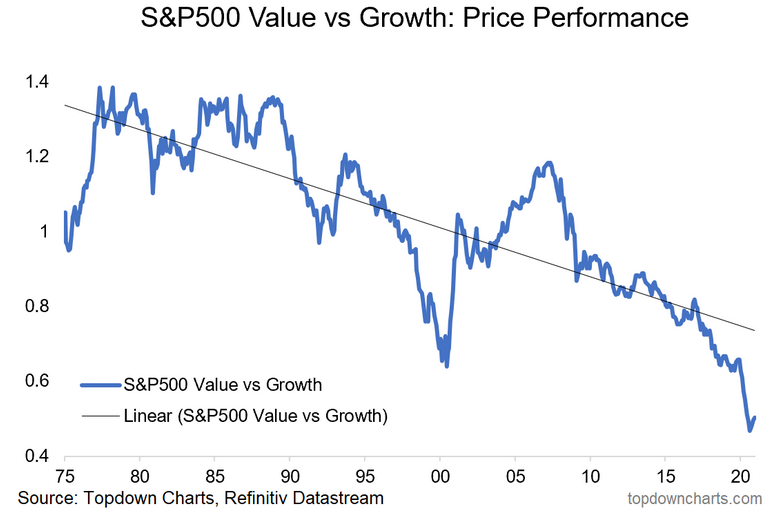 10. China: This was an interesting one, we didn't really see any rotation in the end (maybe a topic for next year?), and one other predictable feature of China also failed to show up… Policy makers in China opted for a more conservative approach to stimulus this time around—by contrast to the rest of the world, China hardly did any stimulus (they did do some though). But to be fair, they managed to re-open their economy, and a combination of stimulus-lite and pent-up demand saw the cyclical picture handily rebound. From here, it's a bit of a guessing game, but we might even see China move to pull back stimulus. That could see an entirely different rotation kick off.

"China: last but not least, this chart shows Chinese property price growth vs China A-shares. It’s a useful chart for China watchers and global investors in general, but it’s of particular interest now because property price growth is rolling over, and that could be good news for China A-shares. Because the marginal speculative investment dollar in China is basically trapped in the country, you tend to see this succession of chasing one hot asset after another. Thus, we could start to see a rotation effect between property and stocks in China, and that (along with cheap valuations, easier monetary policy, better global growth, and a trade deal/truce) could drive a potentially explosive new bull market in China A-shares." 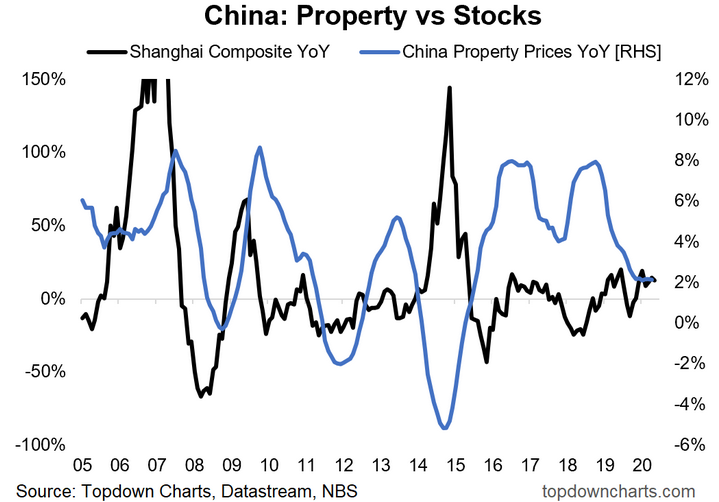 To sum up: I would say it was an interesting year, and it certainly was, but then again I don't think any of this stuff is ever not interesting! On reflection it goes to show that even if you start off "right" in your analysis, you can end up wildly wrong as life happens. In the end, all you can do is continue to adapt, change your view as the evidence changes, and be continuously looking for opportunities to expand your mental toolkit and improve the process. In that respect, this year provided a useful laboratory on all fronts.