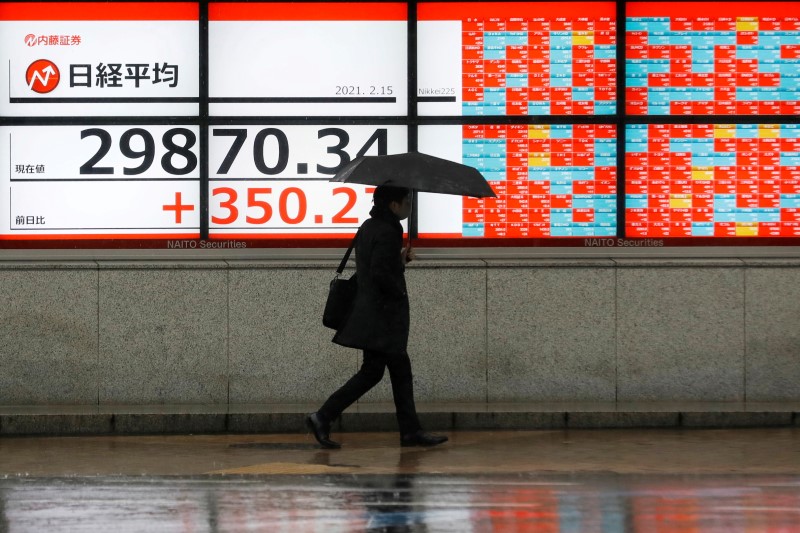 © Reuters. FILE PHOTO: A man holding an umbrella walks in front of an electric board showing Nikkei index at a brokerage in Tokyo, Japan February 15, 2021. REUTERS/Kim Kyung-Hoon

By Thyagaraju Adinarayan and Hideyuki Sano

LONDON/TOKYO (Reuters) – World stocks climbed another peak on Monday, while U.S. bond yields were near three-month lows as worries of rising inflation abated and investors anticipated the U.S. Federal Reserve sticking to its dovish course this week.

The MSCI world equity index and Europe’s index reached record highs, lifted by the prospect of a broadening economic recovery from COVID-19 and anticipation of dovish monetary policy from central banks.

“The rally at the moment feels cautiously optimistic. The reality is that I feel it will continue to climb slowly as we continue to see decent data supporting the argument,” John Woolfitt, Director at Atlantic Capital at London, said.

Yields on the 10-year U.S. Treasuries stood at 1.4602%, with investors seemingly relaxed about their inflation concerns, which spooked rates in late March. [US/]

“It is becoming painful for bond bears and I bet the 10-year yield will fall to 1.25% or even 1%,” said Akira Takei, fund manager at Asset Management One, noting that the U.S. economic recovery is likely to slow in coming months.

Many investors expect the Fed to repeat its dovish view at its two-day meeting from Tuesday. While some board members have said the central bank should start discussing tapering its bond buying, most investors think a majority still prefer to wait.

Markets in Asia were calmer with China, Hong Kong and Australia closed for a holiday. rose 0.7%, while MSCI’s broadest index of Asia-Pacific shares outside Japan was down 0.2%.

Broader markets largely shrugged off the weekend’s G7 meeting, which scolded China over human rights in its Xinjiang region, called for Hong Kong to keep a high degree of autonomy and demanded a full and thorough investigation of the origins of the coronavirus in China.

In currencies, the euro has lost steam after the European Central Bank last week showed no willingness to reduce its stimulus and traded at $1.2109, having fallen to a one-month low of $1.2093 on Friday . [FRX/]

The yen stood little changed at 109.68 yen, while the British pound changed hands at $1.4108, near the lower end of its trading range over the past month.

held on to weekend gains, when Elon Musk flagged Tesla (NASDAQ:)’s possible resumption of transactions using the token. It was last bought at $39,267.