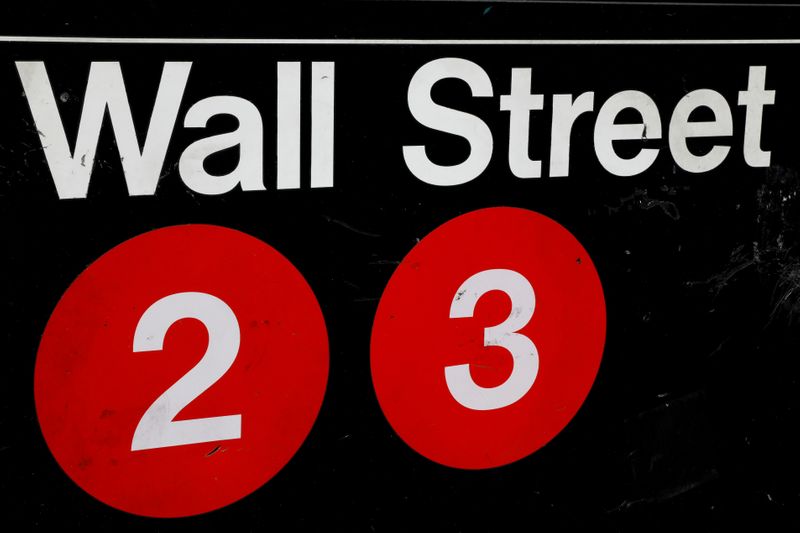 © Reuters. FILE PHOTO: FILE PHOTO: A sign for the Wall Street subway station is seen in the financial district in New York

NEW YORK (Reuters) – Wall Street is kicking off a crucial reporting season as U.S. companies provide quarterly results a year after the coronavirus pandemic crippled the economy and as investors look for reasons to support a stock market at record highs.

Results begin in earnest next week with major banks. Overall S&P 500 earnings are expected to have jumped 25% in the first quarter from a year ago, according to IBES data from Refinitiv.

That would be the biggest quarterly gain since 2018, when tax cuts under former President Donald Trump drove a surge in profit growth.

With the at record highs, valuations are stretched heading into the season, leaving some investors looking to earnings for further support.

“We’ve seen earnings estimates go up, but… when you look at the market price as a multiple of those forward earnings, it has stayed pretty steadily at around 22 times,” said Brad McMillan, chief investment officer at Commonwealth Financial Network.

The S&P 500 was trading at 22.3 times forward earnings as of Friday compared with a long-term average of about 15, based on Refinitiv’s data.

Early quarterly results have been strong. Strategists say that bodes well for the rest of the season, and it could be a sign that results may exceed already high expectations.

The 20 S&P 500 companies that reported earnings as of Thursday topped analyst estimates by 11% on average, said Nick Raich, chief executive of The Earnings Scout, an independent research firm. That is about 1.5 times the average for those companies over the last three years and about triple the longer-term average, he said.

Another positive sign is that estimates overall have been rising heading into the earnings period. Estimates typically drop ahead of a reporting period after companies give conservative outlooks.

At the start of March, analysts expected first-quarter S&P 500 earnings growth of 22%, based on Refinitiv data.

Still, some fear that investors will be disappointed after the sharp run up in earnings expectations, which could dent stock prices after a months-long rally led by economically sensitive groups including energy and financials.

Investors have bet that these stocks are the most likely to benefit from the reopening of the U.S. economy.

One risk to future earnings is the threat of U.S. President Joe Biden’s corporate tax hikes from their current 21%. A 28% tax rate would take 7.4% off S&P 500 companies’ earnings per share, according to UBS.

Two sectors to watch are financials and materials, McMillan said, noting: “If businesses are starting to grow again, they’re going to need to borrow money.”

Financials are expected to show one of the biggest earnings gains, up 75.6% year-on-year, while materials are seen up 45.4%.

JPMorgan Chase (NYSE:) is due to report Wednesday, and results from other big banks are also due during the week. The banks are expected to produce astounding bottom-line profit increases from a year-ago as they release funds held aside for potential loan losses and perhaps report a record quarter for capital markets revenue.

Investors also may be looking to see whether “stay-at-home” companies and other technology-related names that performed well early in the pandemic can sustain their growth.

Investors are optimistic companies will offer more guidance now after being reluctant give projections at the start of the pandemic.