Sometimes you get one of those days where there’s not a lot happening, and this is one of them. Stocks are down just enough to be a rounding error after yesterday’s impressive rally that saw another new record high for the .

Still, don’t let the lack of news lull you into sleep. You have to be careful if you’re trading on days like these. Sometimes on thin days when there’s no major driver, something small can cause a relatively sharp move.

Looking around this morning, bonds rose slightly, pushing the benchmark below 1.7%, while clawed back some of Monday’s losses to just over $59 a barrel. Shares in Europe rose, but Asia was mixed. Over at the , volatility ticked just barely higher. The weakness in yields could give tech and other growth stocks another tailwind today, and Apple (NASDAQ:) and Tesla (NASDAQ:) rose slightly in pre-market trading following banner days Monday.

Today’s one of those odd days without much in the way of earnings or data, meaning the market could be more vulnerable to getting pushed around by outside news. However, besides mulling over the infrastructure plan, there’s not a lot of really market-relevant economic news happening at the moment. The one really nice development was word that the U.S. reached 4 million vaccinations yesterday, which is a pretty amazing number. About 25% of U.S. adults are fully vaccinated, the government reported yesterday.

Looking ahead, tomorrow brings Fed minutes from their last meeting, a chance to go behind the scenes and see if anybody over on Constitution Avenue objected to or expressed worry about the Fed’s accommodative stance.

Technically, it’s pretty impressive how the SPX sliced right through the 4000 barrier on Friday and put on the after-burners yesterday to hit new highs again. Typically, major indices go back and forth over big, round numbers, but in this case, the SPX acted like a battering ram. That being said, there’s no guarantee we won’t see the other side of 4000 again soon, because it’s rare not to experience some profit taking when a big number gets taken out.

While many gave the jobs report credit for Monday’s rally, don’t necessarily discount vaccination progress. The White House says daily average vaccinations rose recently above three million. Also, while it’s way too early to say, the number of new cases appeared to level off slightly after a recent jump. Let’s hope this continues, but experts still urge caution. No one wants to celebrate on the one-yard line, so to speak.

One question that some people had yesterday is why did the tech sector, especially FAANGs, have such a huge performance when the monster jobs report appeared to paint a scenario where so-called “cyclical” sectors like energy and financials would do well? It goes back to confidence. People appear to be going with what they know and are using the recent weakness to buy things. Tech was weak recently, so now it’s getting swept up in the optimism, too.

In general, people are feeling more confident about what they’re seeing because the money is out there. The economy is awash in it. Also, weather is improving and allowing people to go to restaurants and eat outside again. There may be a psychological component to the current rally.

At the same time, Treasury yields are being held in check, which tends to help the tech sector and other “momentum” stocks like Tesla (TSLA), which gained some Monday. The economic outlook is “brightening,” Cleveland Fed President Loretta Mester told CNBC, but she also emphasized there’s still a long way to go on the jobs front to get back to where things were before COVID. She said “we need to see more progress” and “more of those good numbers come our way.”

The real question, Mester said, is whether the elevated inflation readings she thinks we’re likely to see in the near future will be sustained. The answer is probably not, she added. The same factors that have held inflation down over the last few years are still in place, Mester explained. None of this sounds very hawkish, and it might be one reason yields remained relatively flat early this week.

Monday’s March Investor Movement Index® (IMXSM) from TD Ameritrade showed clients continuing to buy FAANGs, including AAPL. For the third month in a row, that’s one of the ones they came after when it showed weakness, and we also saw buying in the semiconductor sector with stocks like Nvidia (NASDAQ:) and Advanced Micro Devices (NASDAQ:).

Other findings from the March IMX included one surprising development where clients were net-buyers of Walmart (NYSE:). That’s not a sexy stock by any stretch of the imagination, but it had a weak print in March and people came in to buy it. Square (NYSE:) was also a net-buy. The IMX is TD Ameritrade’s proprietary, behavior-based index, aggregating Main Street investor positions and activity to measure what investors actually were doing and how they were positioned in the markets.

One big stock the IMX showed clients net-selling in March was Facebook (NASDAQ:). It looks like clients might have gotten nervous about some of the continued developments there with FB and other big social media companies under congressional scrutiny. Also, clients were net-sellers of Citigroup (NYSE:) and Wells Fargo (NYSE:), which in this rate environment might look like a confusing decision. Apparently, though, many investors had some nice profits and decided to take a little off the table.

Even while investors increased their exposure to the market, overall volume in stocks has fallen the last couple of weeks. This might just be a seasonal development. Maybe spring break meant more to people this year, for obvious reasons. Look at the Transportation Security Administration’s (TSA) air travel numbers the last one and a half weeks. It’s absolutely phenomenal, nearly hitting pre-COVID rates. Recent daily numbers have been topping 1.5 million, down from around 2 million to 2.5 million on the same dates back in 2019 before the pandemic.

Also, people have been in front of their screens working more than normal, and their kids have been in front of screens. People really, truly want to take a break, so it’s not surprising at all to see volume fall. Volumes will likely return later this year, but maybe not to the amazing levels seen in January. Remember, when volume is lighter there’s sometimes more choppiness, with fewer buyers around to meet sellers and vice versa.

The real test for this current rally could be the coming earnings season, because no one is likely to be forgiving. As a reporting company, you’re going to have to perform or get slapped down.

It’s still a few weeks until the government releases its first estimate for Q1 U.S. gross domestic product growth on April 29. That hasn’t stopped other forecasters from having their say, and the numbers look very strong.

If you listen to analysts in the media, it’s getting to feel like 2021 is almost a done deal unless COVID makes a major comeback. There’s all sorts of optimism around earnings and economic growth, though the proof is in the pudding, as they say. The question is what happens in 2022, especially considering potentially tough earnings comparisons, talk of higher taxes and regulation, and even the possibility (according to some) of a more hawkish Fed. 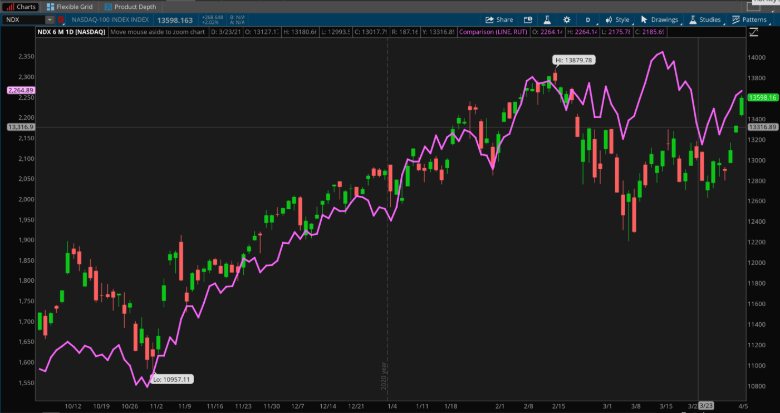 NASDAQ 100 And Russell 2000 Combined Daily Chart.
CHART OF THE DAY: HOT, JUST NOT SIZZLING. It seems like it’s hard to find anything that’s not making new highs the last few days, but there are a few indices that haven’t. Two of them are here in this six-month chart, which shows the (NDX—candlestick) and the (RUT—purple line) small-cap index. Both are doing well, but off their all-time highs posted earlier this year. Data Sources: Nasdaq, Russell. Chart source: The thinkorswim® platform. For illustrative purposes only. Past performance does not guarantee future results.

Guidance On Guidance: Last week, we mentioned that in general, company guidance looks more positive than usual going into the Q1 reporting period. However, keep in mind that the number of companies issuing Q1 forecasts remains below normal, possibly due to COVID. So things may seem positive from a guidance perspective now, but that might not be the full picture. Check for more insight in coming days and weeks when most Wall Street analysts start posting their expectations for overall earnings and revenue growth. The main question heading into earnings season is whether the strong surge seen in Q4 carried over into the new year.

For that, let’s turn to research firm CFRA, which on Monday released its Q1 earnings outlook and projects 14.8% year-over-year growth. The outlook for earnings per share “offers encouragement,” CFRA’s Sam Stovall wrote in a note. The firm sees gains for eight of the S&P 500’s 11 sectors, led by Consumer Discretionary, Materials, and Financials. The laggards look like Real Estate, Industrials, and Energy.

Next Stage: Technology and other big growth sectors led us out of the COVID plunge last year and so-called “cyclicals” like financials and energy shined early this year as the economy began recovering. So what sectors traditionally do well in the next stage of a post-recession cycle? There’s no firm rule about where certain sectors should or could go at any given time, especially when you consider how fast things are changing. The 2020 bear market “barely” lasted a month, and the first stage of the economic recovery is moving quickly, too.

In the past, these kinds of cycles sometimes took years, but now—thanks in part to improved technology and communications, as well as much more rapid fiscal and monetary policy changes—the economy and the markets speed through recession and recovery. This can make it challenging to observe and trade the traditional sector reactions that typically accompany an economic cycle.

Picking Up Traction? In a recent article, Barron’s said the fast pace of economic recovery could continue to mean good things for sectors that led the way year-to-date, with special mention to materials thanks to improving factory activity. Mining firm Freeport-McMoRan (NYSE:) was a big gainer Monday, for instance. Last week’s ISM manufacturing number and the introduction of President Biden’s infrastructure plan might put new energy into Industrials and Materials, Barron’s noted.

Then the ISM services data released Monday hit a new all-time high, which kind of confirmed what we saw in last Friday’s jobs report and might mean better times ahead for traditional “services” companies like restaurants, hotels, and casinos. If there’s one area some investors appear to be losing a little excitement about over the last week or so, it’s the “bond proxies,” like Utilities and Staples. They both traditionally struggle a bit when Treasury yields rise.