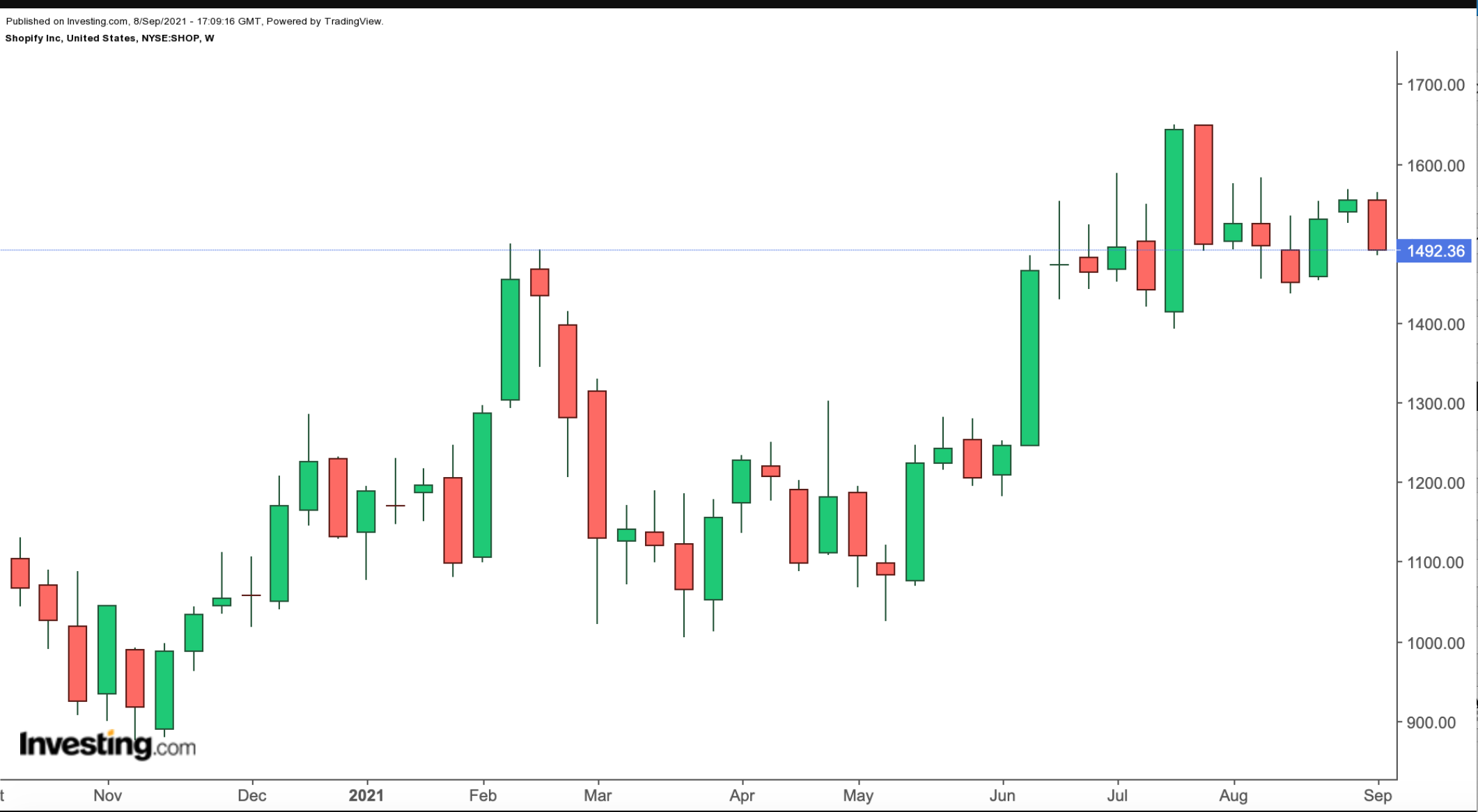 Shopify was initially known as a website designer and e-commerce platform. However, it has evolved and grown to offer back-end products and services. Now, merchants of all sizes use Shopify for payments, shipping and data analytics.

In addition, the company owns a stake in the “buy now, pay later” firm Affirm Holdings (NASDAQ:). Thus, customers can finance their purchases on the Shopify platform. The move extends Shopify’s focus from merchants to customers, especially younger shoppers, who might be more inclined to use the buy-now-pay-later option when they shop.

In late August, Shopify announced it would launch in-app shopping features on social media platform TikTok. Wall Street concurs this collaboration could be a significant revenue driver for Shopify.

The company is expanding its addressable market and investors are pleased overall.

So let’s take a look at how the SHOP shares could fare in the weeks ahead.

What To Expect From SHOP Stock 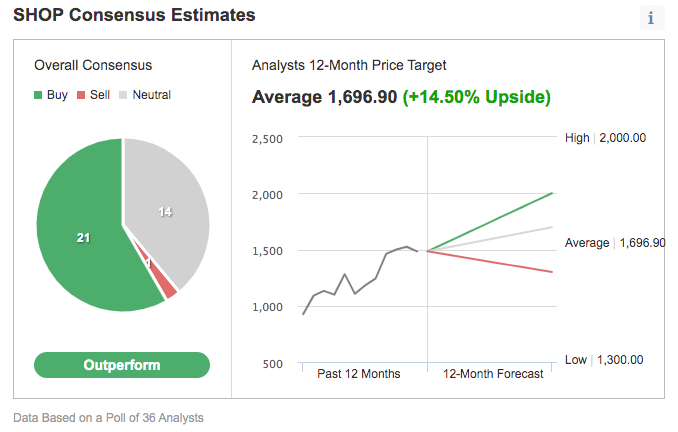 The stock’s trailing P/E, P/S and P/B ratios stand at 79.37x, 18.94x and 49.76x, respectively. Even for a growth name like Shopify, these metrics mostly point to an overstretched valuation. It is not fully possible to discuss an established pure-play direct competitor stock to Shopify. Therefore, we can look at ratios for a number of other tech names.

On a side note, readers might be interested to know that in May, Squarespace (NYSE:), which also offers an all-in-one e-commerce platform, went public via a direct listing. So far, SQSP shares are flat.

Investors who watch technical charts might be interested to know that a number of short-term indicators are suggesting a further decline in the SHOP share price is possible. In case of further profit-taking, Shopify stock would possibly find support around $1,400, after which it could trade sideways while it establishes a new base.

Finally, as part of the short-term sentiment analysis, it would be important to look at the implied volatility (IV) levels for Shopify options. This metric typically shows us the market’s opinion of potential moves in a security. However, this metric does not forecast the direction of the move.

Our expectation is for the stock price to range-trade between $1,400 and $1,500, especially during September and possibly in early October. A potential decline toward $1,400 would offer new SHOP investors a better entry point. Then, toward the end of the year, we could possibly see a new leg up emerge in SHOP stock.

Investors who are not concerned with daily moves in price and who believe in the long-term potential of the company could consider investing in Shopify shares now.

Yesterday, SHOP stock traded at $1,477.81. Buy-and-hold investors should expect to keep this long position for several months while the stock potentially makes an attempt toward the all-time high of $1,650, leading to a return of about 11%.

We should remind readers that a number of brokers enable retail investors to buy fractional shares, whereby they can allocate smaller sums in companies whose share prices are high. Once SHOP stock is firmly established around $1,650, it could then potentially make a move toward another record high. However, such a run-up in price could take several quarters.

Meanwhile, investors who are concerned about large declines might also consider placing a stop-loss at about 3-5% below their entry point.

2. Buy An ETF With SHOP As A Main Holding

Many readers are familiar with the fact that we regularly cover exchange-traded funds (ETFs) that might be suitable for buy-and-hold investors. Thus, readers who do not want to commit capital to SHOP stock but would still like to have substantial exposure to the shares could consider researching a fund that holds the company as a top holding.

Examples of such ETFs include:

Readers who believe there could be more profit-taking in SHOP stock in the short run might consider initiating a bear put spread strategy. As it involves options, this set up will not be appropriate for all investors.

It might also be appropriate for long-term SHOP investors to use this strategy in conjunction with their long stock option. The set-up would offer some short-term protection against a decline in price in the coming weeks.

Such a bear put spread would be established for a net debit (or net cost). It will profit if Shopify shares decline in price.

For instance, the trader might buy an out-of-the-money (OTM) put option, like the SHOP Dec.17 1480-strike put option. This option is currently offered at $115.55. Thus, it would cost the trader $11,555 to own this put option, which expires in about three months.

At the same time, the trader would sell another put option with a lower strike, like the SHOP Dec.17 1460-strike put option. This option is currently offered at $105.65. Thus, the trader would receive $10,565 to sell this put option, which also expires in slightly over three months.

This maximum loss of $990 could easily be realized if the position is held to expiry and both SHOP puts expire worthless. Both puts will expire worthless if the Shopify share price at expiration is above the strike price of the long put (higher strike), which is $1,480 at this point.

This trade would break even at $1,469.90 on the day of the expiry (excluding brokerage commissions).

Investors with a two- to three-year horizon are likely to see significant returns in Shopify shares. However, there could be further short-term profit-taking in SHOP stock in the coming weeks.