With valuations at historical extremes, stock picking is becoming harder for many investors. As well, with share prices having rallied so powerfully on generous levels of Fed and government stimulus, many market participants are now anticipating the start of Federal Reserve tapering, which could cause stocks to tumble.

This combination of factors is spurring uncertainty among long-term investors looking to earn a stable income but still achieve decent capital gains.

In such an uncertain environment, it is always a good strategic move to seek refuge in defensive companies with a lot of cash and the proven ability to endure any downturn. Among this group of dominant players, Microsoft (NASDAQ:) is our top pick. 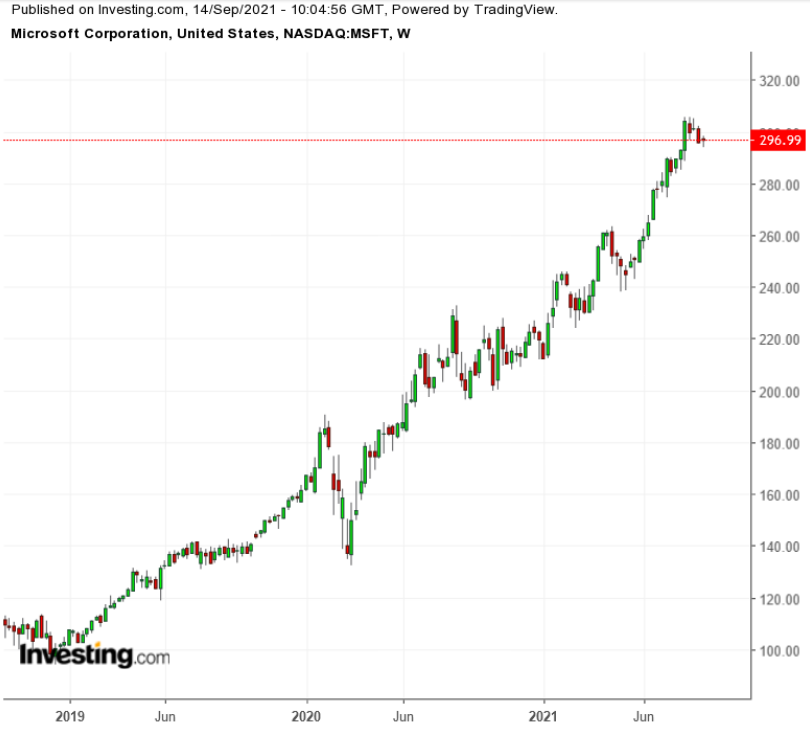 Beyond doubling in value since the market crash in March 2020, there are numerous reasons to believe Microsoft is not only a safe investment, but continues to have more upside potential.

The business of the Redmond, Washington-based tech giant can be divided into two segments: legacy products, such as MS Office and other software the company has developed, and a second division that encompasses high-growth new technology operations, such as cloud computing, artificial intelligence and gaming.

Since the global health crisis began, Microsoft has been firing on all cylinders. The pandemic changed the way we work, study, and entertain ourselves. The shifting dynamics of daily life under COVID-19 have put Microsoft in an ideal position to benefit immensely while continuing to grow.

In its most recent , MSFT posted sales and profit that exceeded analyst estimates for a 10th straight quarter, showing that CEO Satya Nadella’s strategy to make Microsoft the largest cloud-computing provider remains on track. Microsoft’s Intelligent Cloud segment accounted for 33.8% of the company’s 2020 revenue, making it the largest of the technology behemoth’s major business lines for the first time.

Microsoft’s cloud-computing business has contributed massively to the stock’s more than 425% advance in the past five years—a period in which Nadella also branched out into additional new growth areas. During his tenure, more than $45 billion was spent on acquiring companies, including business social networking site LinkedIn, video game developers Mojang and Zenimax, and the code-storage service GitHub.

Each of those bets have largely paid off. The pandemic has fueled added demand for the company’s communication tools and other services. Millions of workers and students stuck at home during lockdowns used the company’s meeting software, Teams, to remain in touch and connected. Teams, the Microsoft product that competes with Slack Technologies (NYSE:), reached 250 million monthly active users in July, a huge jump from the 145 million the company reported in April.

Still, the relentless rally over the past five years, which sent Microsoft stock, which closed on Monday at $296.99, soaring almost 450% higher, likely makes investors wonder, has the stock become too expensive to buy?

Wedbush Securities analysts, in a recent note, said that with the work-from-home trend persisting after the spread of the Delta variant, MSFT growth momentum remains intact. The firm maintained its buy rating on the stock, while raising its price target to $350 from $325. The Wedbush note added:

“Microsoft remains our favorite large cap cloud play, and we believe the stock will move higher into year-end as the Street further appreciates the cloud transformation story.”

Due to this strong growth potential, the majority of analysts don’t see a problem assigning a buy rating to MSFT, even at these record high levels.

Of 36 analysts polled by Investing.com who cover Microsoft, 33 have an outperform rating on the stock. 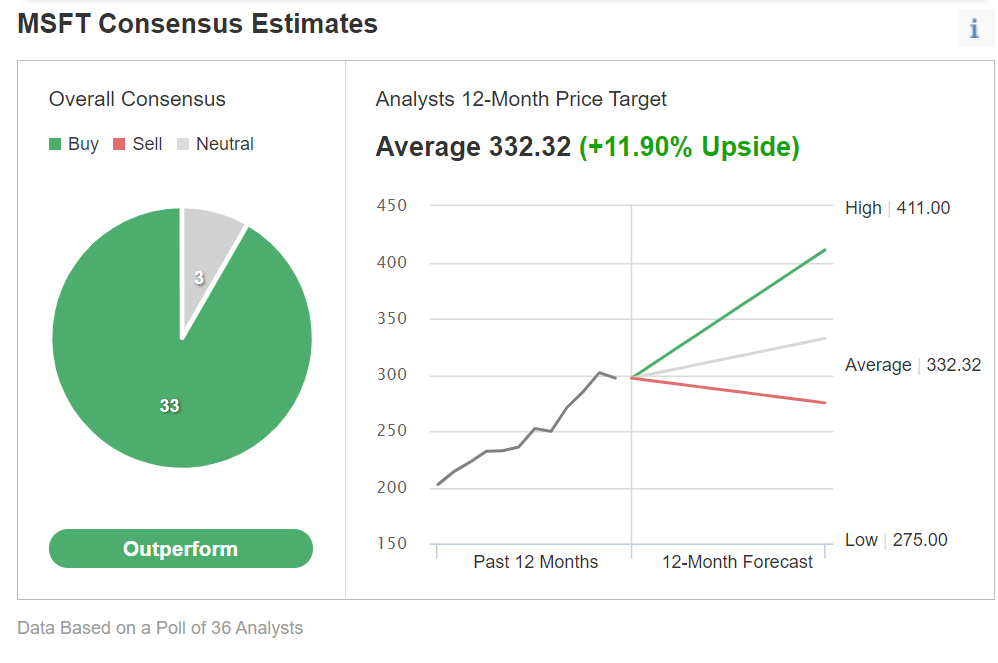 The average 12-month price target from these analysts is $332.32 price target, an almost 12% upside.

Furthermore, the stock’s technicals have been promising; previous pullbacks have hit support perfectly. “If this thing stays above $275, there’s no question about it, you got to be long,” Blue Line Capital founder and President Bill Baruch told CNBC in a recent interview.

Along with its excellent growth potential, Microsoft is one of the few mega-cap tech giants that pay regular dividends. It currently yields 0.76%, paying $0.56 quarterly. Plus, the payout ratio is a low, 27.54%.

Though not robust, the dividend looks even more promising when considering the company has an 82% share of the desktop operating system market, generating massive amounts of recurring cash for the company. Its Office flagship, which is now a subscription-based service for Microsoft’s millions of home and corporate users, continues to be a powerful driver of earnings.

In its first “substantive” cost change since launching Office 365 a decade ago, Microsoft said in a blog post last month that the price for its 365 Business Basic plan will jump 20% to $6 per user, while the high-end version of the suite will see a bump to $36 per user from $32. According to analysts’ estimates, the move will add $5 billion to the company’s revenue by 2022. Which means there’s plenty of room for the company’s payouts to accelerate.

Right now, the growth rate on MSFT’s dividend is about 10% annually which, over the past five years provided a nice cushion against inflation.

If you are an income investor, you need to find companies like Microsoft to stash in your portfolio. These are the giants that have the power to defend their businesses while rewarding you for being a stakeholder for the rest of your life.

That yield may look small to many investors, but don’t forget that Microsoft is still growing, while offering terrific upside potential, too. Including dividend payments, Microsoft has delivered more than 400% in total returns over the past five years.

Despite a highly impressive rally over the past one year, Microsoft continues to offer more upside as well as regular income stream. That’s hard to beat.

The company is in all the right businesses, providing a durable competitive advantage along with recurring cash flows, making the stock a staple holding for any long-term portfolio.