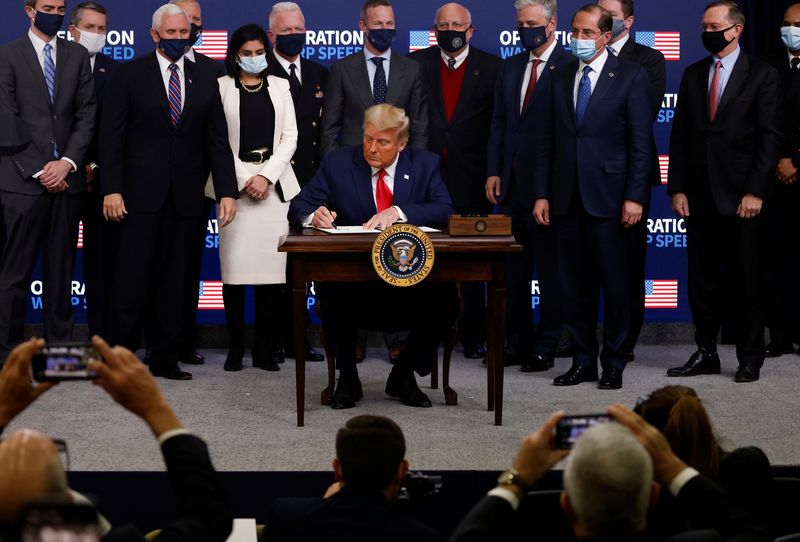 WASHINGTON (Reuters) – U.S. President Donald Trump said on Tuesday he would invoke the Defense Production Act if needed to ensure Americans are first in line for domestically produced coronavirus vaccines at a summit designed to give him and his team credit for speedy vaccine development.

Trump made his remarks just before signing an executive order intended to ensure that priority access for COVID-19 vaccines procured by the U.S. government is given to the American people before assisting other nations.

The summit, held at a building on the White House complex, was put together in part to highlight Trump's role in pressing for quick progress on a vaccine. The Republican lost the 2020 presidential election to Democrat Joe Biden but has refused to concede.

At the beginning of the event, a video was played showing people, including infectious disease expert Dr. Anthony Fauci, casting doubt on the likelihood that a vaccine would be ready before the end of the year.

The U.S. Food and Drug Administration is expected to approve a vaccine developed by Pfizer Inc (N:PFE) and Germany's BioNTech SE (F:22UAy) soon. Despite Trump's repeated suggestion that the pandemic is rounding the turn, U.S. coronavirus cases have exploded, crossing the 15 million mark on Tuesday.

President-elect Biden has made fighting the pandemic a top priority when he comes into office.

Trump's executive order appeared to be put together in part to highlight Trump's "America First" philosophy ahead of Biden's incoming administration.

But the president's own advisers have said the government was well placed to vaccinate the U.S. population by mid-2021, raising the question of why such an order was needed.

"I'm staying out of this. I can't comment," Dr. Moncef Slaoui, a leader of Trump's vaccine initiative Operation Warp Speed, told ABC when asked about the order. "We feel that we can deliver the vaccines as needed, so I don't exactly (know) what … this order is about."

The order does not appear to have a clear enforcement mechanism. The Defense Production Act has more teeth.

The act, which was passed in 1950, grants the president the power to expand industrial production of key materials or products for national security and other reasons.

"If necessary … we'll invoke the Defense Production Act, but we don't think it will be necessary. If it is, it's a very powerful act, as you know, because we've used it very, very successfully," Trump said.

Key members of Trump's White House Coronavirus Task Force attended the event and took a photo with Trump when he signed the order in an auditorium with some 100 people, most of whom wore masks.

Fauci was not present. Trump has had a complicated relationship with the well-respected doctor, who has been director of the National Institute of Allergy and Infectious Diseases since 1984. Biden has made him a chief medical adviser in his upcoming administration.

The White House did not invite members of the Biden transition team to the summit. Biden's administration will oversee vaccine distribution after he is inaugurated on Jan. 20.

Last month, the president told reporters not to let Biden take credit for the vaccine. "The vaccines were me, and I pushed people harder than they've ever been pushed before," he said.

Trump, who has asserted allegations of widespread electoral fraud in key states without evidence, repeated his claims when asked on Tuesday about why Biden officials had not been included in the summit.