In our previous report, we stated:

“While I fully expect a reflexive rally next week, that will likely be an opportunity to reduce risk rather than chasing markets. Such will be the case until we see money flows start to turn positive again, suggesting some underlying buying pressure.”

Such was indeed the cast as the markets (via SPY) successfully tested and held the 50-dma (red dashed line.) Despite the fact money flows remained weak, as shown in the chart below, the market did manage to regain previous highs. 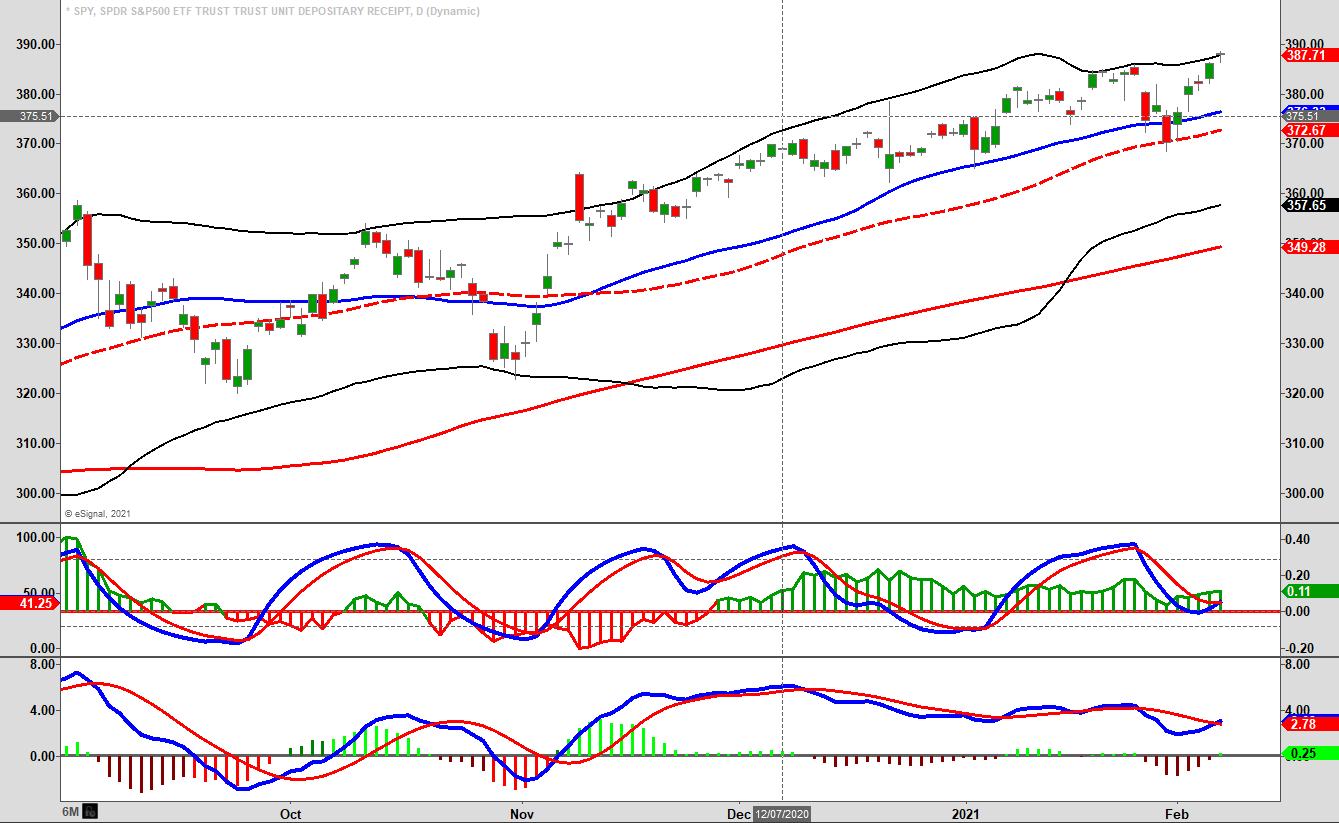 While the money flow “buy signal” will likely trigger next week, the market is already trading 2-standard deviations above the 40-dma. Such suggests that the upside may be more limited over the next couple of weeks.

As I noted in Thursday’s “3-Minutes” video, the rally, and even the attempt at all-time highs, is well within the context of the consolidation process. With the money flow signal starting to bottom, we added exposure to portfolios this past week.

While the market did rally as expected last week, the rally is still at risk currently given the more extreme overbought and bullish conditions. Speculation remains rampant, and there are many indicators from relative strength to participation that suggest “something isn’t quite right” with the market currently.

As such, we continue to suggest a modicum of caution with equity risk. While there is nothing to suggest a much deeper correction is coming, there is also nothing suggesting there isn’t.

The point of portfolio management is the management of risk. In other words, if you turn your gains into a loss, you aren’t managing risk appropriately.

Such is something Reddit readers learned the hard way last week.

It All Ended Badly Very Quickly

Last week, we discussed how the entire “GameStop” saga would eventually end. To wit:

“Think about a crowded theatre. At the moment, everyone is going into the theatre (buying), and no one is selling. However, when they begin to try and sell their positions, no one will be there to buy from them.

Such is the equivalent of yelling “fire.” The smart ones will get out early. The rest will find themselves scrambling towards a very narrow exit. Once the price starts falling, the sellers will swamp the buyers driving the price lower. In GameStop's case, given the company’s value is around $10, where it was trading before the mania, the decline will be both brutal and fast.”

I also stated that Wall Street would likely “win” the battle in the end. They did.

One of the key players in the “GameStop (NYSE:GME)” saga was Keith Gil, who seemingly minted millions of dollars trading in GameStop and other stocks. His story, which I have not been able to verify thoroughly, is that he turned $50,000 into roughly $50 million trading stocks and options.

However, after this past week, that number has declined sharply. Such is the very essence of the Wall Street axiom:

“Pigs get fat. Hogs get slaughtered.”

A lesson for all investors to learn here is the value of “taking gains.” What often seems like a winning trade that can’t lose often is the one trade that loses the most.

Unfortunately for Gil, not only did he lose a healthy amount of gains, he is about to become the scapegoat of the regulators.

Of course, to provide cover for Wall Street, the people owned by the major banks and brokerage firms jumped to the fore to “investigate” the matter.

“We will discuss whether or not the recent events warrant further action. We need to understand deeply what happened before we go to action but certainly we’re looking carefully at these events.”

As is always the case, when anyone “works with regulators,” it is only to ensure that Wall Street banks have the ongoing ability to “rape and pillage” retail investors with impunity.

How do you know this?

Because Janet Yellen had to get an “ethics waiver” to oversee the regulatory committee after taking more than $7 million from Wall Street firms in “speaking fees” since leaving the Fed. Considering that she didn’t even show up for some of the events, “speaking fees” are essentially a legal “bribe” for making sure “regulatory actions” favor your firm.

It wasn’t the “retail traders” that caused the problems with GameStop and other companies. The issue came from Wall Street firms, primarily hedge funds, “shorting” these stocks “naked.”

How do you know this was happening? Because GameStop had over 120% of its shares shorted.

There is nothing wrong with legally “shorting” a stock. Investors buy stocks expecting the price to rise. Shorting a stock is simply a bet the price will decline. Shorting stocks can hedge risk in a primarily long-equity portfolio.

It is currently legal to borrow shares from someone who is long the company and then sell those shares to someone else. When the price declines, the person “short” the shares, repurchases them at a lower price and returns the shares to the lender.

What is illegal is to sell shares short that you have neither borrowed nor made arrangements to buy. Such is being “naked.”

So when the seller cannot cover or “settle” in this instance, the price of GameStop shares skyrocket as there were simply no shares to buy.

When the system provides the ability to sell an unlimited number of non-existent shares in a publicly-traded company, those firms have the power to destroy and manipulate the share price at will.

It is illegal. It is manipulation.

Wall Street turns a blind eye to their large hedgefund accounts that routinely participate in these illegal transactions because of the large fees they collect from them. These institutions are actively facilitating the destruction of shareholder value in return for short term windfalls in the form of trading fees. Wall Street, not retail investors, are the problem and are complicit in aiding hedge funds to create counterfeit shares.

Given that Wall Street’s regulators are effectively owned, including the Federal Reserve and the Treasury, there is little incentive to “fix” the system. It is much easier to punish a retail investor for playing the same game and calling it a victory to appease the media.

“Bull markets are strongest when broad and weakest when narrow.”

Currently, the number of stocks outperforming the market is dropping sharply. Such was a point SentimenTrader made on Thursday:

“It’s a truism of markets, lasting decades if not centuries, that when investors panic, they sell everything together. When they’re comfortable, they buy and sell securities on their individual merits.

That’s why we see correlations among stocks and other assets rise during times of anxiety and fall during periods of complacency. This is notable now because the correlation among stocks in the S&P 500 has plunged to the lowest level in over a year.” 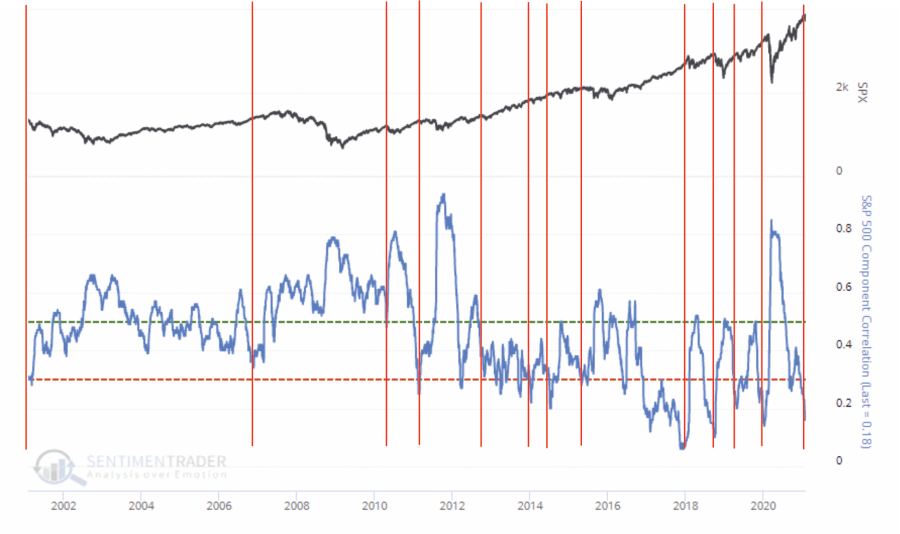 What is also notable is that these periods of low correlations have typically aligned themselves with previous market tops. While the topping process can take some, and generally long enough for investors to dismiss the warning as “wrong this time,” the subsequent correction can range from mild to more extreme.

As with all indicators, the problem is the indicator doesn’t define what type of correction it will be.

As I noted in Friday’s report:

“The market is currently priced for perfection betting on explosive economic growth, a falling dollar, interest rates remaining low, consumer spending surging sharply, and inflation remaining muted. The reality is that none of those things will likely turn out to be the case.

The one thing that always trips of the market is the one thing that no one is paying attention to. For me, that risk lies with the US Dollar. As noted previously, everyone expects the dollar to continue to decline, and the falling dollar has been the tailwind for the emerging market, commodity, and equity “risk-on” trade. Whatever causes the dollar to reverse will likely bring the equity market down with it.” 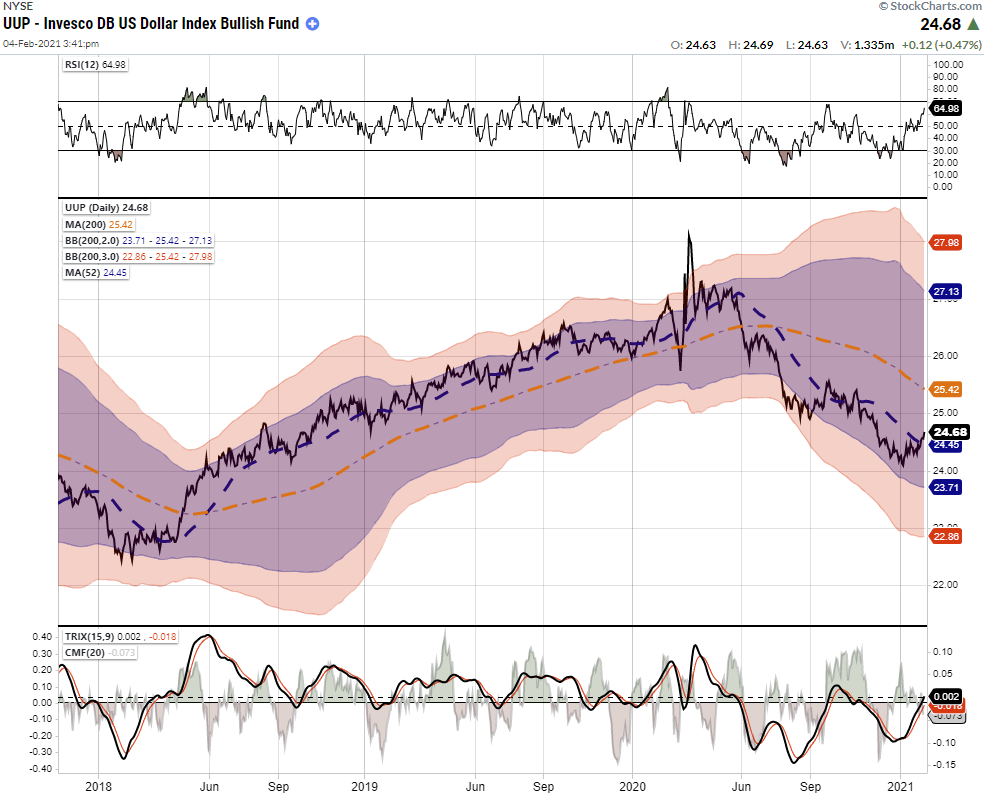 Very quietly, the dollar (via UUP) has been rising and recently broke above its 50-dma. With a substantial net short position outstanding, a further rise could trigger shorts to begin covering, pushing the dollar up further.

As noted, such would not be welcome for the equity markets due to the non-correlation between the dollar and equities. Most importantly, a surging dollar, with rising interest rates, could put a severe dent in the “reflation trade.”

While the markets have not seemed to care about the dollar at the moment, this is one of those things that can sneak up on you when you least expect it.

Two weeks ago, we discussed selling our index holdings and raising cash to position for a correction. Last weekend, we stated that we expected a rally following the selloff at the end of January. As such, we did put some of our cash holdings to work this past week, increasing exposure to inflationary trades (energy and financials) and reducing our duration risk in our bonds.

While I have read many comments about “how we missed the rally,” the truth is we didn’t. Yes, we did reduce exposure previously after overweighting our portfolios in December, but we still maintained a healthy weight. We also increased the weighting somewhat this week.

With our “risk-off” indicators turning, such suggests the bull market is still well intact. What concerns us is the overwhelming amount of data suggesting more extreme conditions in the market that are usually only present during “mania” phases.

Yes, this time could indeed be different. However, we suspect that while the “mania” will undoubtedly last longer than we would imagine, it will most likely end the same way it did for those chasing GameStop. It is just the way markets work.

These words from Howard Marks sum up our views:

“It’s the swings of psychology that get people into the biggest trouble, especially since investors’ emotions invariably swing in the wrong direction at the wrong time. When things are going well people become greedy and enthusiastic, and when times are troubled, people become fearful and reticent. That’s just the wrong thing to do. It’s important to control fear and greed.

Too little skepticism and too much eagerness in an up-market – just like too much resistance and pessimism in a down-market – can be very bad for investment results.”

Currently, there is very little skepticism.