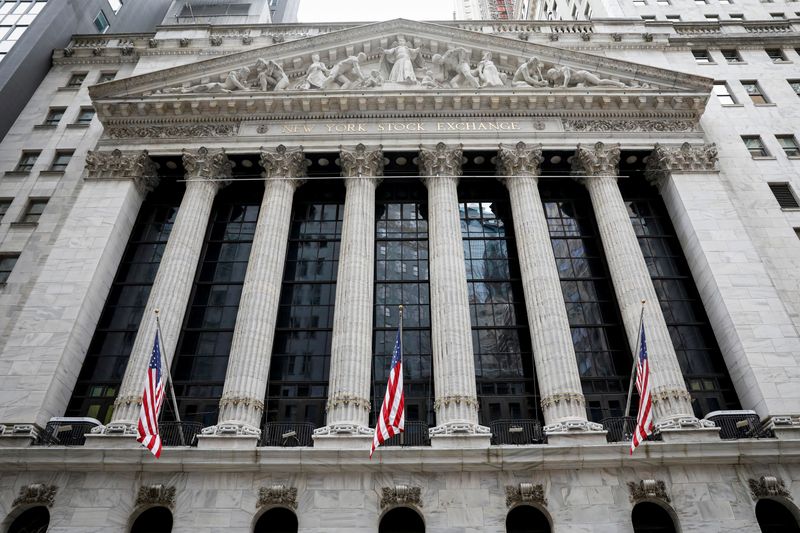 © Reuters. FILE PHOTO: The front facade of the NYSE is seen in New York

(Reuters) – Wall Street dipped on Tuesday, pulled lower by energy stocks and threatening to put an end to a recent rally, while investors awaited the result of the Federal Reserve's two-day policy meeting.

The Nasdaq turned negative in afternoon trading after earlier touching a two-week high.

The S&P 500 and Dow Jones Industrial Average closed at record highs in the prior session as optimism about a $1.9 trillion fiscal stimulus package and ongoing vaccination drives bolstered views that the economy was on a path to recovery.

However, stimulus and improving economic data have recently stoked inflation worries, pushing up yields and upending equity markets in February.

Wall Street's fear gauge hit a five-week low at 19.68 points as yields on the benchmark U.S. 10-year Treasury slipped for the second straight session to 1.59% from a 13-month high hit last week.

Fears about an overheating economy and a jump-forward in interest rate expectations have increased scrutiny on the Fed meeting, where policymakers are likely to raise economic forecasts and repeat their pledge to remain accommodative for the foreseeable future.

"This Fed meeting is one of the most important ones for the market in a long time. It is the first we have had after the recent inflation rate rise and concerns about inflation," said Tom Martin, senior portfolio manager at Globalt Investments in Atlanta.

Data showed retail sales dropped more than expected in February due to bitterly cold weather across the country. Another report indicated winter storms in Texas led to a plunge in U.S. factory output last month.

Energy stocks slumped 2.4% after a drop in oil prices while financials retreated about 1%. Technology and communication services jumped about 0.5% and 0.7%, respectively.

The Russell growth index was marginally higher versus the Russell value index's 0.7% fall, in a slight reversal of a recent trend away from technology and other high-growth stocks.

Declining issues outnumbered advancing ones on the NYSE by a 1.87-to-1 ratio; on Nasdaq, a 2.65-to-1 ratio favored decliners.