Recent vaccine and stimulus news has mostly sounded promising, but it has reached the point where investors are asking, “What’s next?” The market can be impatient, but these developments tend to take a while. A vaccine rollout requires months, and it’s still unclear if Congress can actually get something done in this lame-duck session. That means it’s wait-and-see mode on a lot of things.

Meanwhile, after a few weeks of positive vaccine news that helped push the reality of the crisis into the background a bit, it looks like there’s more focus today on the here and now. The country had its biggest day of diagnoses yesterday and medical experts are saying the U.S. faces a very tough winter. This sort of thing may not be enough to knock the wind out of the rally, but it’s a reminder that a lot of the recent gains were built on hope for something that’s in the future. As we noted yesterday, it’s important not to get caught up in the vaccine euphoria.

Tomorrow brings the biggest data of the week, when investors get a look at November payrolls. As a reminder, Wall Street analysts, on average, think about 650,000 jobs were created last month, up from 638,000 in October. However, estimates are pretty widespread, with some analysts saying they expect job growth not much above 500,000. It’s a hard number to estimate because different states have different rules. It looks like it might be one of those fluid Friday mornings where traders need to stay on their toes as everyone studies all the numbers.

It wouldn’t be surprising to see jobs lost in the services industry due to (hopefully) temporary shutdowns of restaurants, hotels and bars. However, are health-care, business-to-business, and transportation jobs still being created? If so, that would tell us that despite the shutdowns, the rest of the economy is trying to chug along as much as possible.

The latest round of weekly initial jobless claims showed things falling toward the low end of the recent range at 712,000, well under analysts’ estimates for around 780,000 and down from 787,000 the prior week. While it’s still way too high, perhaps that could provide one sign that at least things aren’t getting worse. Remember that before COVID-19, these weekly numbers had been below 300,000 for literally years. Let’s hope it gets back to that soon.

Looking at where the S&P 500 Index has traded recently, it’s hard to talk about technical factors because we’re near all-time highs. If we bounce around in this area between 3620 and 3680, that would be fine as long as we don’t see a big selloff. That’s a 2% range, so a drop back to the low end wouldn’t be the end of the world. What would be good is to see a trading range get established, maybe in that area. The market’s been rolling up gains so quickly it hasn’t really taken time to consolidate, but maybe now’s when that happens since the fundamental picture is slowing down a bit aside from payrolls tomorrow.

Some sort of stimulus package before the end of the year looks like it’s gaining traction, which helps explain this latest run to new record highs by a couple major indices. Right now, though, it feels like the market is on a trip wire.

Any unpleasant news from Washington could possibly roll back a portion of these gains, while any new sign of progress could help bond yields and financials climb, as we saw yesterday Considering that both parties have been negotiating since spring without much sign of compromise, it’s important not to get too caught up in any stimulus euphoria until it’s actually a fact on the ground, so to speak.

The recent pattern has been for Wall Street to kick off each week on pretty solid footing and then face challenges later on. Last week bucked the trend as the market felt surprisingly robust even in a normally slow holiday trading period. The next two days will help determine if the old pattern is back or if last week was the start of a new trend.

Things felt bifurcated yesterday as tech stocks got kicked around a bit even, while financials and energy took the lead higher. There appeared to be a ripple effect from the Salesforce (NYSE:CRM) acquisition of Slack Technologies (NYSE:WORK), with cloud company stocks like Amazon (NASDAQ:AMZN) and Microsoft (NASDAQ:MSFT) taking some heat. The hottest place to be, and not in a good way, was in shares of CRM, which dove nearly 9% as some analysts questioned the logic of its deal. Some wonder how CRM can monetize WORK, and others say Microsoft Teams represents tough competition.

Trade With China Back In Focus As Biden Opines

One lost story meandering back into view is an old friend of ours: Trade with China. If this year was basically “Coronavirus Year” for the stock market, last year was Chinese trade year. That issue faded, but it’s not hard to remember how front and center it was, say, a year ago.

The latest news is an interview President-elect Joe Biden gave the New York Times this week. Biden said he wouldn’t immediately remove the 25% tariffs that President Donald Trump imposed on about half of China’s exports to the U.S. or the Phase 1 agreement Trump made with China requiring Beijing to purchase about $200 billion in additional U.S. goods and services during 2020-2021. China has fallen significantly behind on that one, the paper reported.

“I’m not going to make any immediate moves, and the same applies to the tariffs,” Biden said. “I’m not going to prejudice my options.” He added he wants to pursue trade policy with China that produces progress on China’s abusive practices, and hopes to gain leverage by working with U.S. trade allies.

It’s unclear how hard Biden will press on any of this, but it seems like an interesting mix of positive and negative news for U.S. companies—the negative being that for now it doesn’t look like the tariffs are going anywhere fast. It would be positive, though, if Biden actually gains the “leverage” he wants through alliances. If that happens, China might face a more united opposition to a few of its less free trade-friendly policies. 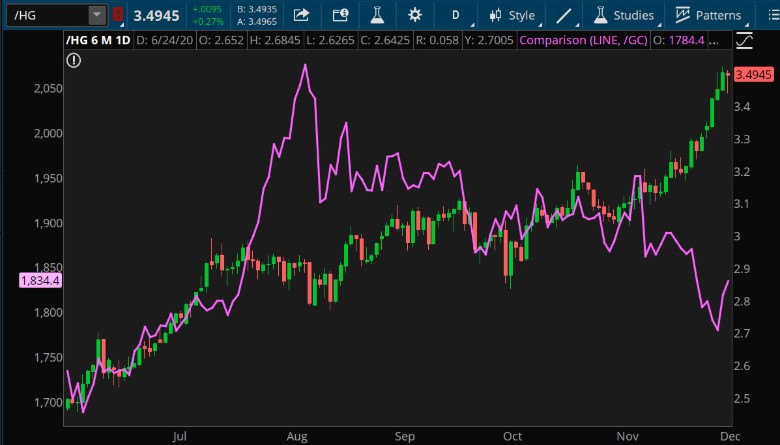 CHART OF THE DAY: COPPER OUTSHINING GOLD? After the last round of stimulus in the spring and summer, concerns about “money printing” helped drive gold (/GC—purple line) to new all-time highs. Though gold has lost some of its shine in recent months, copper (/HG—candlestick)—which is seen as a proxy for the industrial, construction, and emerging markets—has continued to power on. Data source: CME Group (NASDAQ:CME). Chart source: The thinkorswim® platform from TD Ameritrade (NASDAQ:AMTD). For illustrative purposes only. Past performance does not guarantee future results.

Warm Up A Reliever: While info tech has led all year, there’ve been signs of a slowdown over the last two months, and the sector lagged the overall market again Wednesday. The big question for next year is this: If tech slows down, can financials or industrials come in to take its place? If we don’t see that, the market could be in for a little trouble. There has been a lot of rotation out of the mega-cap tech companies and into small-caps and even overseas stocks the last month or two, which is generally healthy because it speaks to more broad-based market strength. However, investors who’ve held on closely to their FAANG stocks the last few years and didn’t dip a toe into diversification might find out this kind of strategy doesn’t necessarily work in an environment where other sectors and smaller-cap stocks are getting some love.

Consumer discretionary is another sector that’s in the spotlight with tech, because this is the holiday quarter. So far, one of the interesting things about the Q3 earnings season is that some of the retailers who were considered “essential” and kept their doors open through all the shutdowns had amazing earnings but got punished by investors. Think Lowe’s (NYSE:LOW) and Home Depot (NYSE:HD). Meanwhile, some of the companies with low expectations that did just OK saw their shares get bought, like Kohls (NYSE:KSS. We’ll have to wait and see how this balances out heading into the coming earnings season just a month and a half away.

Vaccine Data Positive, But What Next? The market still reflects a lot of enthusiasm around vaccines hopefully bringing things back to normal. At the same time, people have to look at vaccine distribution as a big logistical task that might not go as smoothly as we’d all like it to. It can’t just go to one country to be effective. It has to go to everyone. Also, after the first responders, who gets it next? How is it going to be distributed in rural areas? People are talking about having widespread vaccinations by spring, and that would be great. However, as an investor, you don’t want to let your optimism get you carried away.

Warning Note: One reason not to get carried away by the vaccine news is the same reason no seasoned health-care investor relaxes just because they own shares of a company whose key drug or medical device just got approved. In the medical industry, it’s not only about setting up an assembly line and turning out widgets. A vaccine is an ultra-complex product that gets injected directly into human bodies, and it’s not an easy manufacturing process. Medical products, even once approved, don’t always continually meet regulatory standards.

If you’re a medical company, the notice you never want to receive is a U.S. Food and Drug Administration warning letter. Often, these address safety issues at a plant where a drug is made, and, in extreme cases, can lead to shutdowns. Then there’s FDA-mandated recall notices companies issue when a batch of product doesn’t meet specifications. This can address problems like foreign substances present in a drug or vaccine, often reported by customers. Not that vaccines made by Pfizer (NYSE:PFE) or Moderna (NASDAQ:MRNA) necessarily have any safety issues. Only that no vaccine or drug is ever completely in the clear even once approved, and recalls are far from uncommon. As an investor, keep worst-case scenarios in mind as vaccines come on the market. Any break in the product flow could potentially weigh on Wall Street.