Skeptical investors questioned the excessive and questionable run up to $100 preceding the sell-off. When the Company announced a nearly $3 billion secondary offering on March 24, 2021, volatility spiked as shares collapsed in extreme fashion uncovering margin calls resulting from the extreme leverage implemented by Archegos Capital Management.

Adjusted OIBDA grew 5% YoY to $1.18 billion. Streaming and Digital video sales rose to $888 million from $519 million, YoY. U.S. streaming subscribers rose 71% to 19.2 million. CBS All Access and SHOWTIME OTT delivered their best quarter ever for sign-ups. CBS ALL Access was driven by demand for sports content including NFL, UEFA, and SEC as well as original programming.

Global streaming subscribers grew to 30 million and Pluto TV Global monthly-active-users (MAUs) rose to 43 million, up 81% YoY. Affiliate revenues rose 13% YoY, and Advertising revenues rose 4% YoY. The Company owned the most top 30 cable networks among viewers between ages of 18 to 49 and 9 of the 10 original series with kids between 2 to 11 years old.

The Company generated $2.2 billion of operating cash flow from continuing operations and $1.98 billion of free cash flow. As of Dec. 31, 2020, the Company had $3 billion in cash and $3.5 billion in revolving credit that hasn’t been tapped.

On Mar. 24, 2021, ViacomCBS announced a $2.65 billion stock offering composed of 20 million Class B common shares priced at $85 and 10 million 5.75% Series A mandatory convertible note with liquidation preference price at $100 per-share. The convertible shares automatically convert to Class B shares on Apr. 1, 2024. Underwriters were granted the option to purchase an additional 2 million Class B shares and 1.5 million preferred shares within 30 days, which could boost total proceeds to $3.06 billion, but likely not. Subsequently, the offering kicked off the sell-off in shares as the stock closed just three days prior at $100.34 on March 22, 2021. Just two days after the announcement, shares collapsed to lows of $39.81 spurred by nearly $20 billion in block sales.

The relationship between these stocks revealed themselves to be forced liquidations stemming for margin calls linked to a little known family office Archegos Capital Management, operated by former Tiger Management Asia fund manager David Hwang. Details are still murky, but the formerly blacklisted fund manager is at the center of many highly leveraged bets that exploded triggering a domino effect of forced liquidations in its holdings. While shareholders have been hurt, the sell-off may present opportunistic pullback levels for prudent risk-tolerant investors with a longer time frame horizon in shares of VIAC. 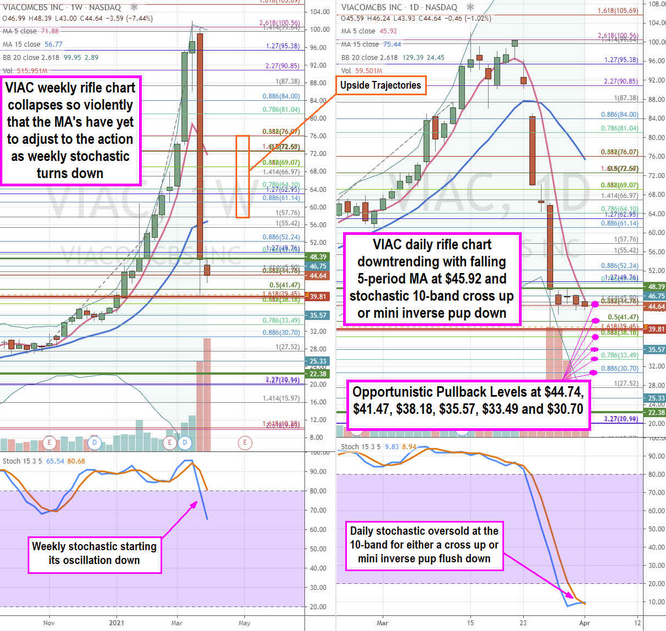 Using the rifle charts on weekly and daily time frames provides a near-term view of the landscape for VIAC stock. The weekly rifle chart uptrend lasted for 19 weeks before peaking near the $100.56 Fibonacci (fib) level. The violent collapse sliced right through the weekly 5-period moving average (MA) at $71.88 and 15-period MA at $56.77 as the weekly stochastic falls through the 80-band.