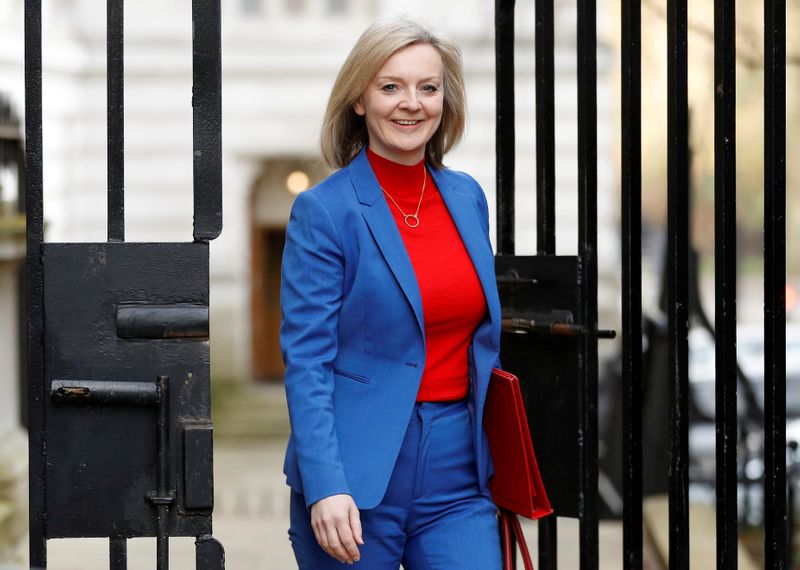 © Reuters. FILE PHOTO: Britain's Secretary of State of International Trade and Minister for Women and Equalities Liz Truss is seen outside Downing Street in London 2/2

LONDON (Reuters) -Britain will suspend retaliatory tariffs imposed on U.S. goods as part of a dispute over aircraft subsidies from Jan. 1, the trade department said, describing the move as an attempt to de-escalate a damaging international trade conflict.

The decision marks the start of Britain's divergence from European Union trade policy, coming into effect on the day its exit from the bloc's rules and regulations is complete, and signals an ambition to forge closer ties with the United States.

The multi-billion dollar tit-for-tat tariff battle between the United States and the European Union relates to a long-running row over state subsidies for aircraft manufacturers Airbus and Boeing (NYSE:BA).

"Ultimately, we want to de-escalate the conflict and come to a negotiated settlement so we can deepen our trading relationship with the U.S. and draw a line under all this," trade minister Liz Truss said in a statement.

No comment was immediately available from the U.S. government or the European Union.

Although Britain formally left the EU in January, under the terms of an 11-month transitional exit arrangement it joined the EU in applying tariffs on $4 billion of U.S. goods in November.

The measures were authorised by the World Trade Organisation (WTO) following a 2019 WTO decision to approve U.S. tariffs on $7.5 billion of EU goods.

However, Britain said it would suspend its tariffs to try to persuade the United States to reach a settlement, albeit with a warning that they could re-impose them "if satisfactory progress towards an agreeable settlement is not made".

For its part, the EU is pessimistic about the chances of an abrupt change in policy from the United States, even as Donald Trump's "America First" presidency comes to an end.

Truss has repeatedly criticised the U.S. tariffs, which have hurt British exports such as Scotch whisky.

The Distilled Spirits Council of the United States applauded Britain's decision and urged Washington to seize the chance to work with Britain to resolve both the aircraft subsidy dispute and move to end steel and aluminum tariffs.

Having quit the EU following a narrow vote in a 2016 referendum, Britain is keen to capitalise on its new-found freedom to strike bilateral trade deals.

The United States is seen as top of the British wish list, although talks with Trump's administration made only limited progress and it remains to be seen how highly President-elect Joe Biden will prioritise a deal.

U.S. and European officials are meeting at a senior level to resolve the aircraft subsidies dispute, according to multiple sources familiar with the matter.

The United States in 2018 imposed tariffs on steel and aluminium coming from the EU, citing national security concerns. The EU, including Britain, retaliated with its own set of tariffs, arguing the U.S. concerns were unfounded.

Truss said the British government would consult with the steel and aluminium sector to see if the tariffs on U.S. goods could be better tailored to suit the British economy.