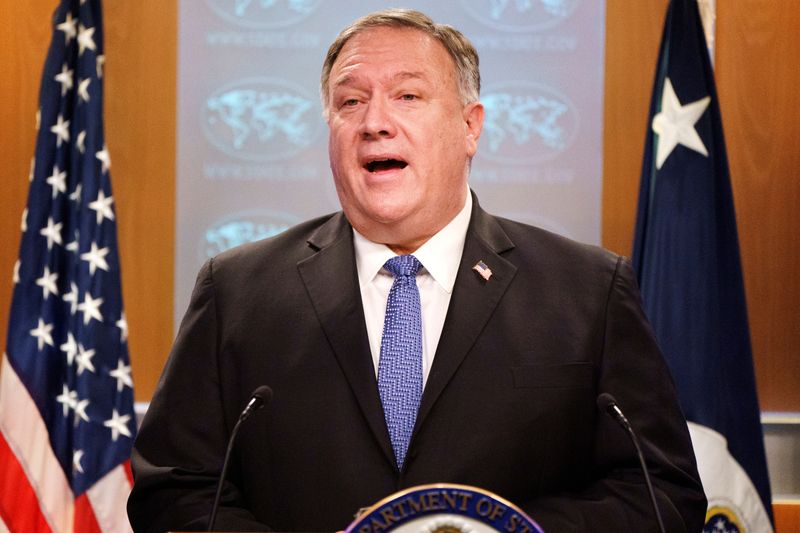 By Humeyra Pamuk and Alexandra Alper

WASHINGTON (Reuters) – The U.S. State Department plans to release as soon as Wednesday a fact sheet urging U.S. investors to comply with an executive order banning investments in alleged Chinese military companies, according to three people familiar with the matter and a copy of the document seen by Reuters.

The executive order, released by the Trump administration in November, bars Americans from buying securities of 35 Chinese companies that the U.S. Department of Defense (DoD) has deemed to be owned or controlled by the Chinese military, starting in November 2021.

Confusion over what the order requires prompted the New York Stock Exchange last Thursday to announce plans to delist three Chinese telecom companies that the Pentagon added to the blacklist. On Monday the NYSE scrapped the move and then in a surprise twist the exchange reversed course a second time on Wednesday and vowed to continue with its bid to delist the firms.

"Ample warning has been given to the compliance officers and risk managers to understand and disclose to their constituents the material risk associated with the Executive Order," a draft of the State Department release states.

"CEOs and their boards now have a legal duty to implement and be in full compliance with the Executive Order," it adds.

Three people, who declined to be named since the matter was not yet public, confirmed plans to release the document and two of them confirmed the contents.

A spokesperson for the State Department declined to confirm the fact sheet but said, "We continue to work with Treasury, DoD, and others to implement the President's Executive Order to address the threat from securities investments that finance Communist Chinese military companies."

The November executive order is part of a bid by U.S. President Donald Trump to cement his tough-on-China legacy in the waning days of his administration. It also gives teeth to a 1999 law that required the DoD to compile a list of Chinese firms backed by the Chinese military.

The catalog now includes China's top chipmaker SMIC and oil giant CNOOC (NYSE:CEO). Index providers like MSCI have begun shedding the blacklisted Chinese firms from their indexes in the wake of the November directive.

The confusion comes against a backdrop of tension among U.S. agencies about how stringently to construe the November executive order. Reuters and other news outlets reported that the State Department and DoD had pushed back against draft guidance that the Treasury Department was planning to issue that was seen as watering down the order.

Both U.S. Secretary of State Mike Pompeo and Treasury Secretary Steven Mnuchin later wrote in tweets that there was no disagreement over the executive order.