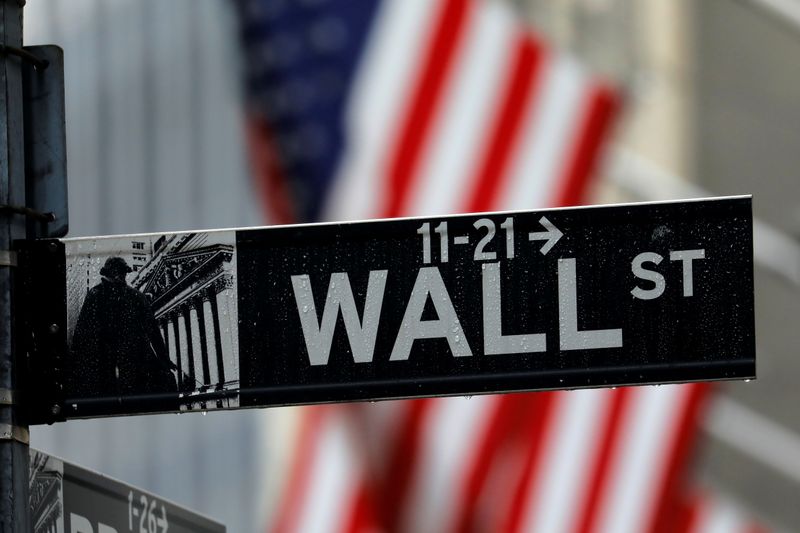 © Reuters. FILE PHOTO: Raindrops hang on a sign for Wall Street outside the New York Stock Exchange in New York

NEW YORK (Reuters) – The year 2020 was a wild one for Wall Street, bookended by the end of the longest bull market in history with the battering of equities by the COVID-19 shutdowns, and a bungee-cord rebound on hopes for economic recovery that resulted in the shortest bear market on record.

After closing at a record high on Feb. 19, stocks suffered a monthlong plummet as the coronavirus pandemic and related government lockdowns sowed panic about the damage to the economy in the United States and globally.

A 9.5% plummet in the S&P 500 on March 12, its biggest-one day percentage drop since the "Black Monday" crash of 1987, put the benchmark index down 26.7% from the February high and confirmed a bear market, widely viewed as a decline of more than 20% from a high.

But the slide only lasted until March 23, when the S&P bottomed. It went on to surpass its February high on Aug. 18, marking the start of a new bull market. The 23 trading days of bear market were the fewest ever.

Along with $2 trillion in fiscal stimulus by the U.S. government to buttress a flagging economy, a major reason for the rebound in stocks in March was monetary stimulus measures supplied by the Federal Reserve, which announced an array of program to backstop the economy on March 23.

As stocks continued to recover and vaccine developments grew more promising, investors began to rotate toward companies that historically outperform as an economy moves out of recession, namely small caps, and to cyclical sectors such as energy, materials, industrials and financials, in the latter part of the year.

With a large portion of cyclical names comprising "value" stocks, the group began to close the gap in what had long been a period of underperformance to "growth" names. The value style never fully re-established dominance, but the momentum behind the technology stocks that led the rally was still enough to leave growth with the better performance this year.

But even with the push higher late in the year, the energy sector wound up as the worst performer by a large margin in 2020, while tech and consumer discretionary led the way higher.

All in all, uncertainty and fear related to the pandemic made for the S&P 500's most volatile year in over a decade, with the index surging or slumping 2% or more in over 40 sessions.

As for individual stock performance, Tesla (NASDAQ:) jumped the line to the top spot when it was added to the on Dec. 21. It shows a gain of about 700% on the year.

The impact of the coronavirus was evident, with stocks that benefited from the "stay-at-home" environment such as online marketplace Etsy (NASDAQ:) rallying roughly 300% while travel names took the brunt of the damage, as cruise ship operators Carnival (NYSE:) and Norwegian Cruise were among the worst performers.

Tesla was by far the most traded, accounting for nearly 7 cents of every dollar, on average each day, according to Refinitiv data.

The rise of low-cost, easy-to-use trading apps has unleashed a flood of retail investor money into stocks and helped fuel a watershed year for new stock offerings. Retail investors have accounted for as much as 25% of the stock market's activity this year, up from 10% of the market in 2019, according to brokerage Citadel Securities.