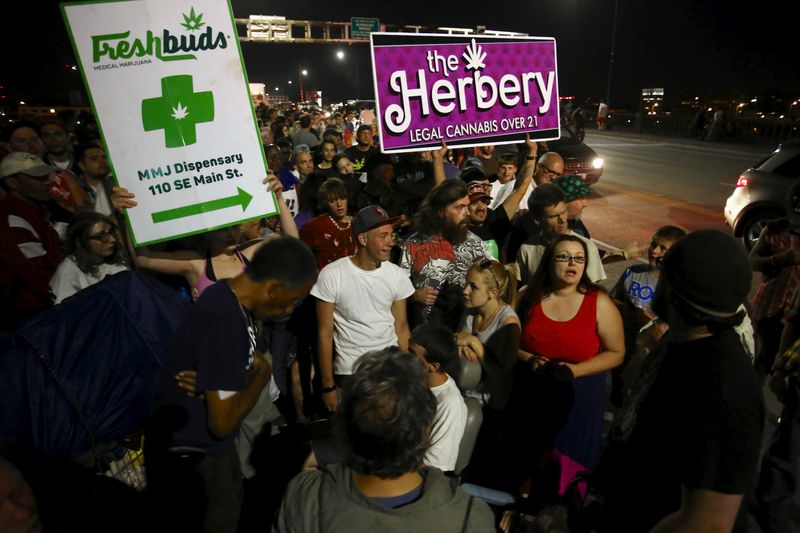 © Reuters. FILE PHOTO: Marijuana enthusiasts gather after midnight to celebrate the legalization of recreational use of marijuana in Portland, Oregon

WASHINGTON (Reuters) – The U.S. House of Representatives voted on Friday to decriminalize marijuana at the federal level, but the legislation is not expected to advance further as long as the Senate remains in Republican hands.

It was the first time either chamber of Congress has voted to end the federal ban on marijuana since the drug was listed as a "controlled substance" in 1970.

Fifteen U.S. states and the District of Columbia have legalized recreational use of marijuana, and over 30 states allow some form of the drug for medicinal purposes. U.S. cannabis sales hit record levels over the Thanksgiving weekend.

But the federal ban on the drug persists, which creates conflicts with state laws and limits cannabis companies' access to banking services and funding.

The Democratic-majority House voted 228-164, largely along party lines, to lift the federal prohibition. But Senate Majority Leader Mitch McConnell, a Republican, is an opponent of the change, meaning a decriminalization proposal is unlikely to see Senate action unless Democrats manage to win both Georgia Senate seats and with them Senate control in a Jan. 5 runoff election.

The bill the House passed would allow states to regulate marijuana, Representative Earl Blumenauer, a Democrat and co-chairman of the Congressional Cannabis Caucus, said in debate.

“This legislation does not legalize cannabis across the country. It stops the federal government from interfering with what states have decided to do," he said.

Republican Representative Debbie Lesko said she found it incredible that Democrats were talking about "legalizing marijuana" instead of focusing on passing more relief from the coronavirus pandemic. "Sometimes I think that the world is turned upside down," she said.

In fact, the House in May passed a mammoth coronavirus aid bill, but it did not advance in the Republican-run Senate. Negotiations are underway on a smaller compromise bill.

The cannabis bill would expunge federal marijuana convictions and impose a 5% tax on cannabis products. The revenue raised would help reinvest in communities most adversely impacted by enforcement of the law, Blumenauer said.