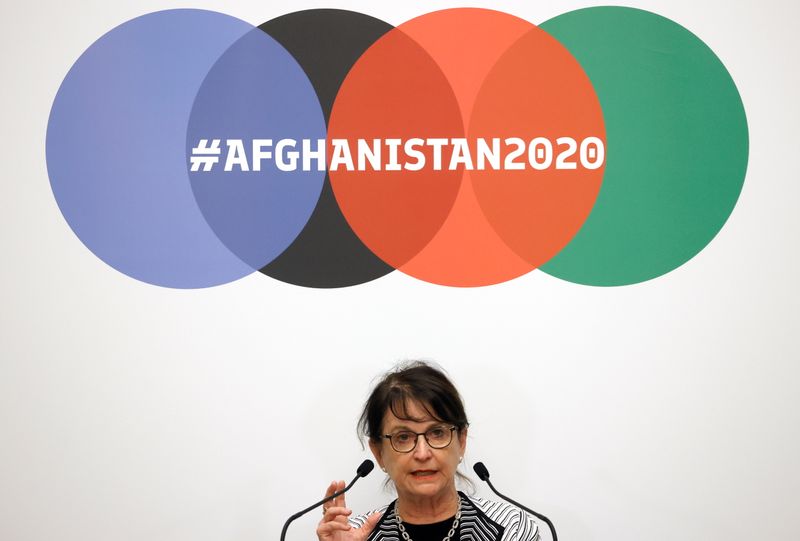 UNITED NATIONS (Reuters) – The United Nations warned on Thursday that the freezing of billions of dollars in Afghan assets to keep it out of Taliban hands would inevitably spark “a severe economic downturn” and could push millions more Afghans into poverty and hunger.

U.N. special envoy on Afghanistan, Deborah Lyons, said a way needed to be found to get money quickly flowing to the country “to prevent a total breakdown of the economy and social order” and with safeguards to ensure it is not misused by the Taliban.

Lyons told the U.N. Security Council that Afghanistan could be set “back for generations.”

“The economy must be allowed to breathe for a few more months, giving the Taliban a chance to demonstrate flexibility and a genuine will to do things differently this time, notably from a human rights, gender, and counter-terrorism perspective,” Lyons told the 15-member council.

Much of the Afghan central bank’s $10 billion in assets are parked overseas, where they are considered a key instrument for the West to pressure the Taliban. The U.S. Treasury Department said it is not easing Taliban sanctions or loosening curbs on the Islamist group’s access to the global financial system.

The International Monetary Fund has also blocked the Taliban from accessing some $440 million in new emergency reserves.

At the start of 2021 half of Afghanistan’s population – more than 18 million people – needed help. The U.N. Development Programme warned on Thursday that Afghanistan was facing universal poverty by the middle of next year.

The Taliban last month seized power 20 years after they were ousted by a U.S.-led invasion for refusing to hand over al Qaeda leader Osama bin Laden in the wake of the Sept. 11, 2001, attacks on the United States.

Taliban leaders have vowed to respect women’s rights in accordance with sharia, or Islamic law. Under their 1996-2001 rule, however, women could not work and girls were banned from school. Women had to cover their faces and be accompanied by a male relative when they left home.

Lyons said the United Nations was receiving increasing reports of those curbs again being placed on women’s rights.

“They have limited girls’ access to education in some regions and dismantled the Department of Women’s Affairs across Afghanistan,” she added.

Nobel Peace Prize winner Malala Yousafzai, who was shot by a Taliban gunman in Pakistan as she left school in 2012, urged the council to recognize “girls’ education is a powerful tool for building peace and security” and protect Afghan women and girls.

“I raised my voice for every girl’s right to go to school. I saw a gunman stop my school bus, call my name, and fire a bullet at me. I was 15 years old,” she told the Security Council on Thursday. “This is a story that many Afghan girls may share if we do not act.”