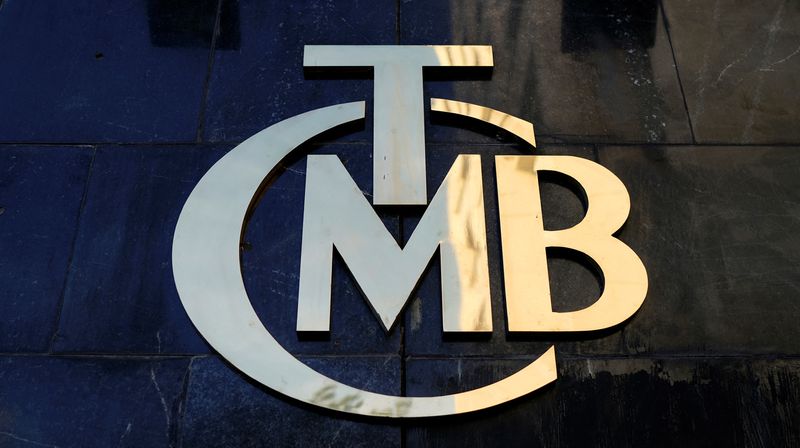 © Reuters. FILE PHOTO: A logo of Turkey’s Central Bank (TCMB) is pictured at the entrance of the bank’s headquarters in Ankara, Turkey April 19, 2015. REUTERS/Umit Bektas

ISTANBUL (Reuters) -Turkey and the United Arab Emirates said on Wednesday they had agreed a nearly $5-billion swap deal in local currencies, in a sign of warming diplomatic relations that provides Ankara financial support as it faces economic turmoil.

The agreement between the countries’ central banks comes after the regional rivals sought in recent months to repair relations that were badly strained in the wake of the 2011 Arab Spring uprisings.

Turkey could tap the foreign currency to bolster its reserves, which on a net basis are at a two-decade low, after the central bank began costly market interventions last month to prop up the tumbling lira.

“We do not see the swap agreement as a meaningfully positive development as it only boosts the headline gross reserve series but does not add to the (central bank) hard currency reserves,” Goldman Sachs (NYSE:) said in a note.

The two central banks said in a statement the accord was for three years with the possibility of extension. Its nominal size is 64 billion lira ($4.71 billion)and 18 billion dirham.

Last month Reuters reported, citing officials, that the Turkish central bank was wrapping up talks with its UAE and Azeri counterparts with at least one deal likely soon.

The accord follows a visit by Abu Dhabi Crown Prince Sheikh Mohammed bin Zayed al-Nahyan to Turkey in November, when preliminary talks on a swap deal took place.

Turkey has swap deals with China, Qatar and South Korea worth about $23 billion.

Turkey’s foreign reserves have been thin since a series of currency market interventions in 2019-2020 in which some $128 billion was sold via state banks, backed by the central bank. Ankara at the time sought swap deals with the United States, Britain, Russia and Malaysia, Reuters reported.

The central bank’s net international reserves fell below $8 billion on Jan. 7 to their lowest level since 2002.