Campbell Soup Company (NYSE:) and the rest of the consumer staple industry, have seen their shares pullback in recent weeks because of mounting fear of inflation. Rising costs are expected to cut into profitability on top of an expected decline in year-over-year sales. Campbell Soup Company’s fiscal fourth-quarter earnings report confirmed those fears but in a way that sent share prices moving higher. While inflation is in the picture, the outlook for earnings isn’t that bad compared to the consensus and, in this case, amounted to good news. With Campbell’s Soup trading about 14X earnings and yielding over 3.5%, it looks like a good time to scoop up a few more of the shares.

Campbell Soup Company saw a in revenue during the fiscal fourth quarter but that was expected. This quarter laps one of the strongest quarters of the pantry loading craze of 2020, news that sheds new light on the results. The good news is that revenue of $1.87 billion beat the consensus by 330 basis points and is up 5% in the two-year stack. more importantly, due to an extra week in the 2020 Q4 reporting period, organic sales are down only 4% from last year, and they’re up 9% versus 2 years ago in evidence of consumer strength and market share gains made by the company

Moving down the report, the adjusted gross margin shrank more than 400 basis points to 31.4% but once again the decline was less than expected. Margin pressure is due to rising input costs and supply-chain hurdles that are being offset in part by pricing power and product mix. Regardless, on the bottom line, both the GAAP and the adjusted earnings beat their consensus estimate as well. The GAAP earnings of $0.95 beat the consensus by a nickel while the adjusted EPS of $0.55 beat by $0.08.

Looking forward, the company is expecting business to remain steady in the coming year. The company’s guidance is for flat to slightly lower revenue in fiscal 2022 which is in line with the consensus estimate. The guidance for earnings is $2.75 to $2.85 versus the $2.85 consensus and we think this is cautious guidance. Inflationary pressures are mounting but Campbell’s has announced aggressive measures to combat it so we see earnings if not revenue outpacing both the guidance and consensus.

Regardless the outlook for revenue and earnings, data from Marketbeat prove Campbell’s offers a good yield to value combination for dividend growth investors. Trading at 14X earnings it’s one of the cheapest Consumer Staples stocks on the market and comes with one of the highest dividend yields. In addition, there is also a positive expectation for dividend increases that is backed up by the cash flow, the payout ratio, and the dividend history as well as a recent decision to increase the share repurchase program. Campbell’s canceled the suspended $1.50 billion repurchase program but added another $500 million to the $250 million it announced last quarter.

Shares of Campbell’s Soup Company advanced more than 2% in the wake of the fourth-quarter earning report confirming support at the $41 level. This support is consistent with the long-term low and should be the bottom in share prices for the near-term at least. Assuming price action can move above the short-term moving average we see shares of Campbell Soup Company moving up into the $44 to $46 range fairly soon. If the short-term moving average cannot be overcome, price action may wallow near support before deciding on a longer-term Direction. 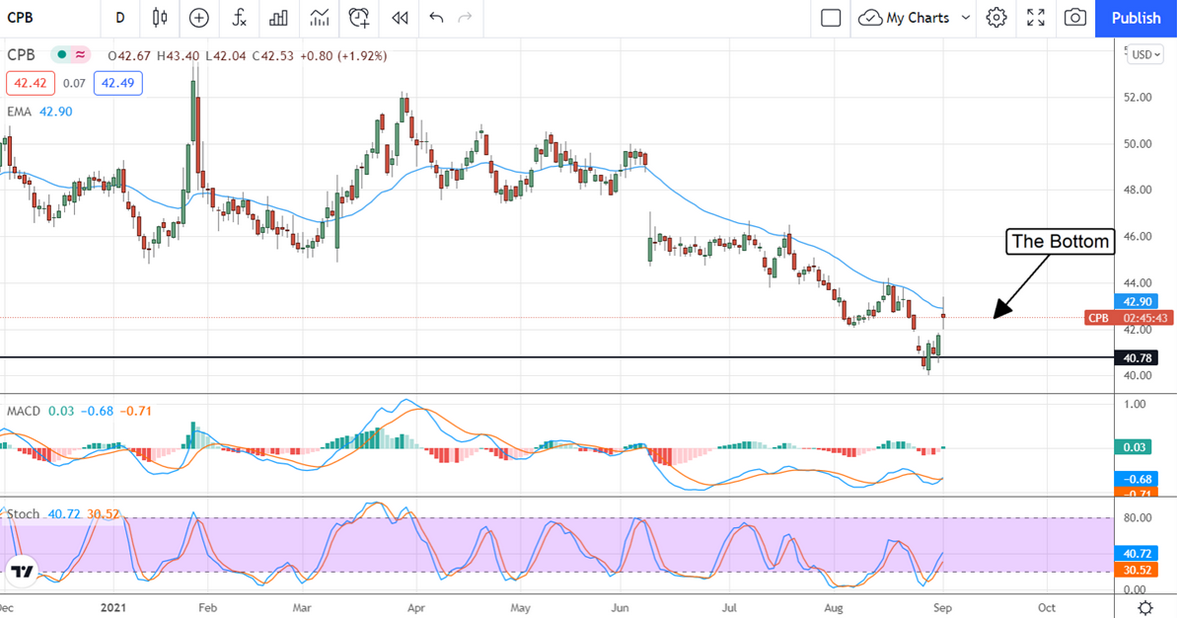