Thursday was an up and down session for the S&P 500. The index rallied modestly after the open only to retreat back to breakeven later in the afternoon. This lethargic, uninspired trade is not a surprise given how far we’ve come since the election. 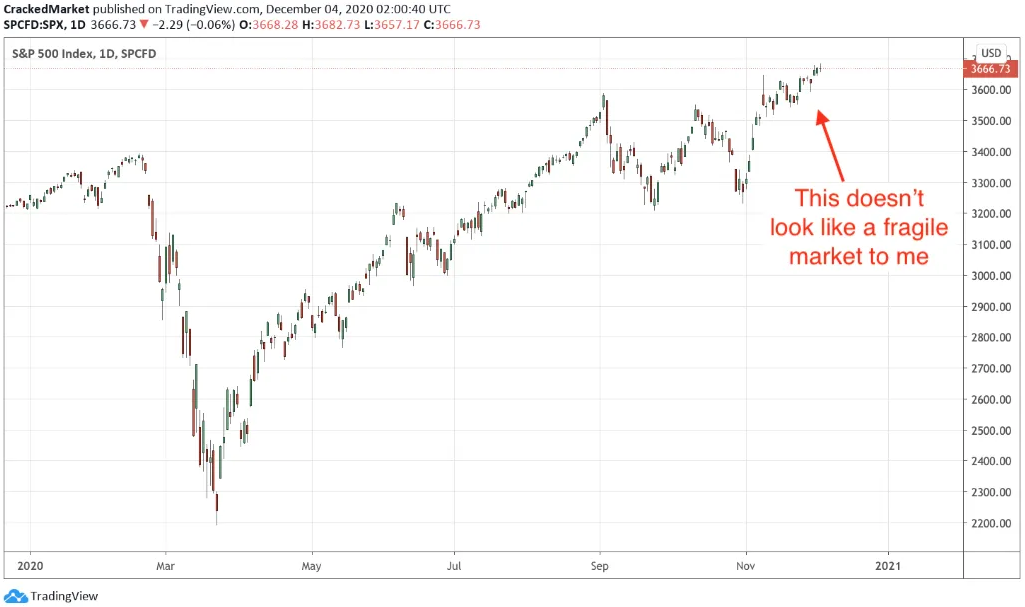 The rebound off the early November lows is in its 5th week and the big gains are already behind us. Momentum remains higher, but forward progress has definitely turned into a grind. As much as things have slowed down, it’s been an easy hold to this point with very few give-backs along the way. That said, we shouldn’t expect things to remain this easy for long.

Maybe we glide higher into Christmas. Or maybe the index stalls and churns sideways. Either wouldn’t be a surprise. The one thing that’s off the table (at least for the moment) is a large collapse. There has been an abundance of negative headlines regarding infection rates. If this market was fragile and looking for an excuse to tumble, these bearish stories have been more than enough to trigger a gigantic selloff. Instead, most stock owners read about infection rates and shrug. No matter what we think should happen, when the crowd refuses to sell a headline, that headlines stop mattering.

Sentiment could change once the calendar rolls over to 2021, but so far, I expect December to remain on autopilot. What we have now is what we should expect for the next few weeks. The only question remaining is if this keeps inching higher or stalls at current levels.

No matter what we think should happen, we trade based on what is happening. And right now this market is happy hanging out near the highs. If prices were vulnerable to a collapse, it would have happened by now. Up or sideways means the only two choices available to us are to buy this or sit it out.

Anyone trying to short this strength is getting killed and we definitely don’t want to join those ranks. A short is coming, we just don’t know if it will start next week, next month, or sometime next year. But no matter what, we need to see the weakness develop before we jump on it. Shorting simply because things are “too high” is a very expensive trading strategy, just ask any bear complaining about this “stupid market”.