In my two recent articles about Tesla (NASDAQ:), see and , I alerted to the fact it had “completed a larger 4th wave as a (tricky) triangle” and that it “can now move higher to ideally $535-550, possibly as high as the low $600s to complete wave-5 of larger wave-III/C.”

It then reached the 1.618x Fib-extension at $509, a typical 3rd wave extension target, and I was looking for “a smaller (red) wave-iv [correction] to ideally $480-465 before moving higher to at least – and ideally – $535+. It can move to $600+ as well if red wave-v decides to extend.” It only bottomed at $489 that day, which suggests it was not a (red) wave-iv, but a smaller degree 4th wave: the current 3rd wave (red wave-iii) is thus extending. Wave-extensions can always happen and must ever be anticipated but can never be known with certainty beforehand.

But all that is beside the point. What matters is Tesla reached the (lower) Elliott Wave Principle (EWP) target (grey arrow) and then reached the (blue) bull flag upside target. Thus, my first article from Nov. 17, when trading in the low- to mid-$400s, was correct. It outlined a maximum downside risk of around $50 and a minimum upside potential of $100. Now that these targets are reached, the logical question is: what’s next? 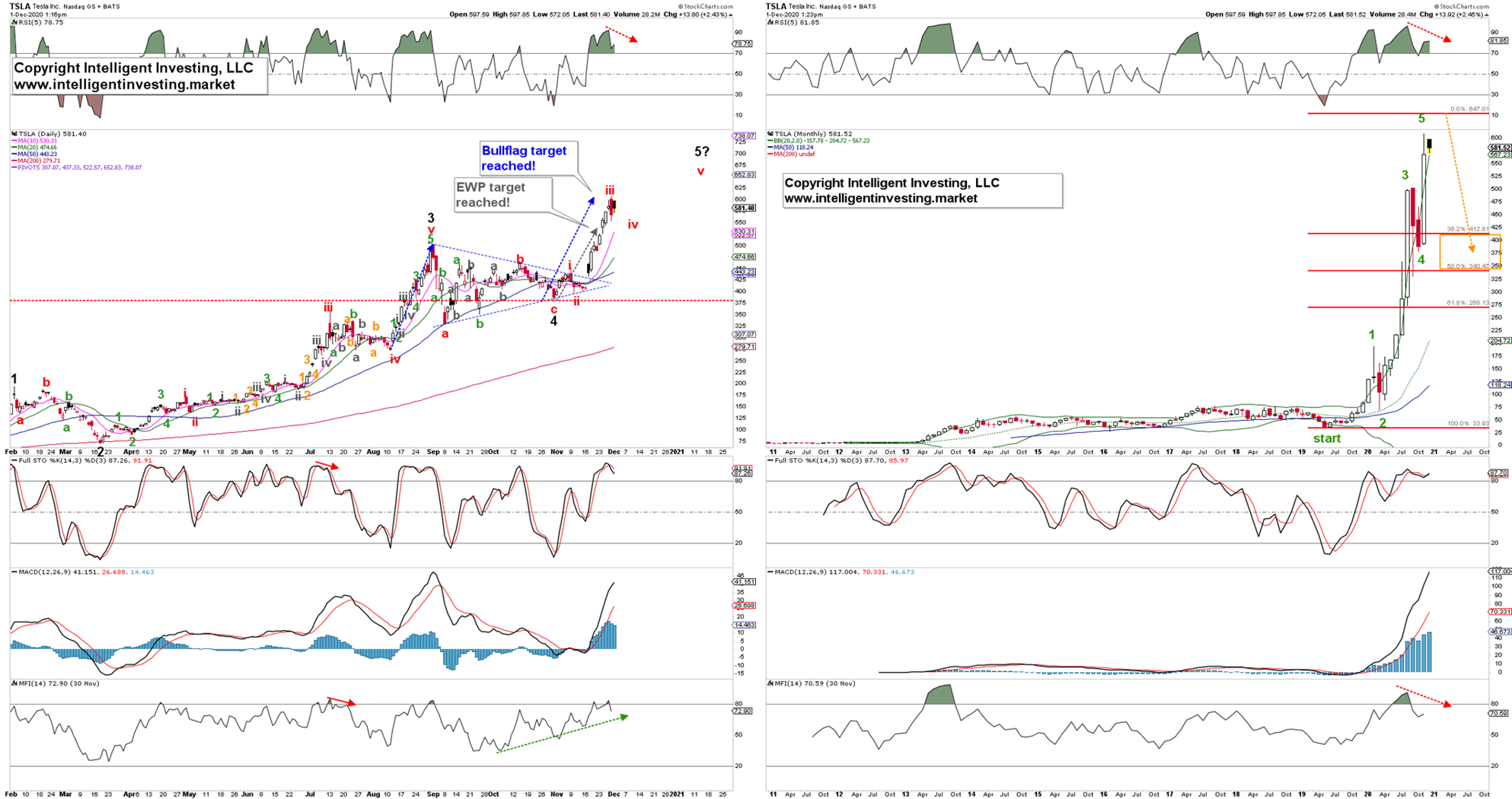 After that, we should see a very sizeable correction as the monthly chart, Figure 1, right chart, shows Tesla will then have completed five larger (green) waves from the mid-2019 low: orange arrow. And after five waves up, always – at least – three waves down will follow. That is the certainty of the EWP. Besides, negative divergence on the monthly RSI5 and Money Flow Indicator is creeping in (red arrows). These are highly reliable indicators foretelling of a pending large (multi-month) correction. The lower MFI is especially concerning as it means less money is flowing into the stock currently. And it is liquidity that drives markets. If liquidity, i.e., buying power, dries up, stocks will eventually succumb to selling pressure: all are part of the natural ebb and flow of assets. But for now, let’s focus on the pending pullback and subsequent rally first. Once support and new upside targets are reached, it is time to re-assess the current thesis of a looming, more extensive correction.