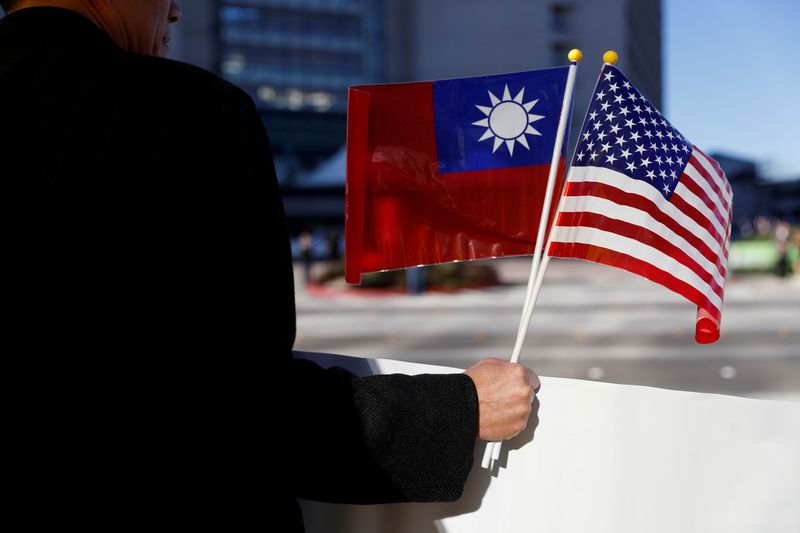 © Reuters. A demonstrator holds flags of Taiwan and the United States in support of Taiwanese President Tsai Ing-wen during an stop-over after her visit to Latin America in Burlingame

TAIPEI (Reuters) – Taiwan Economy Minister Wang Mei-hua said on Thursday a global shortage of auto chips will not be a main topic for a meeting with the United States on Friday, as carmakers are grappling with a supply crunch that has hit production.

The State Department has said Deputy Assistant Secretary for Trade Policy and Negotiations Matt Murray would take part in the closed door meeting. It will be the most senior announced exchange between Taiwan and U.S. President Joe Biden's administration so far.

Car factories around the world are shutting assembly lines because of the chip shortages, which in some cases have been exacerbated by the former U.S. administration's actions against Chinese chip factories.

Wang said semiconductors will be the "main topic" of the rare high-level economic talk between Taipei and Washington, but noted that the "main focus" of the meeting is not on auto chips.

"It's actually a broader theme of future collaboration and goals for the semiconductor supply chain," she told reporters.

Wang acknowledged that the chip shortage had led to a "great impact" on the global scale, but she said as a democratic government, Taiwan "cannot interfere" in company operations.

Germany's economy minister wrote to Wang last month to call for help to resolve the problem, and last week she met chip company executives including from TSMC to push them to ramp up production.

Some Taiwanese politicians have floated the possibility of exchanging auto chips for COVID-19 vaccines, which have yet to begin arriving on the island. Vaccine supplies worldwide are under pressure.

Wang said the economic ministry has told Germany that Taiwan hopes it could help with the purchase of German vaccines whenever possible, but "it is definitely not exchanging chips with vaccines."

The issue of vaccine will not be discussed in Friday's meeting, she added.

Taiwan-U.S. ties were stepped up under former President Donald Trump, angering China, which claims Taiwan as it own territory.

Biden's administration issued a strong statement of support for Taiwan in January amid stepped up Chinese military activity near the island, calling the U.S. commitment to Taipei "rock solid."

Wang has said Washington has already been in touch with Taiwan to discuss the auto chip supply crunch.