Wall Street has a tough act to follow, and that’s not a reference to last night’s game. Stocks rose every day last week, which is hard to pull off twice in a row.

What could break the five-day winning streak? Well, you’ve got a lot of things that almost feel like they’re pointing toward inflation. For instance, the 10-year yield has been galloping along, recently reaching almost 1.2%. That’s up nearly 20 basis points from late January, but still historically low. Rising yields can signal improving economic conditions and hopes for more fiscal stimulus, but also might get some people nervous about inflation prospects.

Crude prices are also accelerating, which is nice if you’re an Energy sector investor but not so great if you’re an airline still dealing with weak travel demand. Now your jet fuel costs are also rising. Meanwhile, you may have noticed you’re paying more at the pump. Gas prices hit $3 a gallon in some places over the weekend. Crude powered through $57 a barrel early Monday.

Volatility keeps easing, with the Cboe Volatility Index (VIX) now approaching the lower end of its long-term range down near 20. This is a level the VIX hasn’t been below in a year, and some analysts suspect it won’t anytime soon due to the heavy options activity still going on.

This week’s earnings schedule is dominated by old stalwarts of the U.S. economy like Coca-Cola (NYSE:KO), General Motors (NYSE:GM) and Walt Disney (NYSE:DIS). Almost 80 S&P 500 companies report over the next five days. Stocks have a positive tone early on, helped in part by stimulus expectations.

On another note, bitcoin rose above $43,000 this morning after Tesla (NASDAQ:TSLA) invested $1.5 billion.

The way the market behaved Friday, it almost felt like investors were putting the pandemic behind them. Obviously, we’re still in the thick of it, but that can’t stop people from hoping for better, apparently.

Look at the types of stocks that caught a tailwind late last week and it’s obvious the reopening hypothesis continues to gain strength. Darden Restaurants (NYSE:DRI) and Starbucks (NASDAQ:SBUX), Wynn Resorts (NASDAQ:WYNN), MGM Resorts (NYSE:MGM), Southwest Airlines (NYSE:LUV) and Hilton Hotels (NYSE:HLT) all threw a party, putting Wall Street in vacation mode. Meanwhile, the Technology sector brought up the rear on Friday despite many of us still being locked down with our laptops.

Generally, cyclical and small-cap stocks that tend to benefit from reopening and fiscal stimulus led the charge much of last week. The disappointing jobs report Friday (see more below) might have strengthened hopes for a large stimulus package from Congress, research firm Briefing.com observed, maybe lending some support to cyclicals.

Maybe it’s a case of early spring fever, and it might not last. The market has come very far, very fast, raising concerns about valuations. On the one hand, the current rock bottom Fed interest rates can make people more comfortable with higher valuations, as my fellow TDA Network* contributor Kevin Hincks pointed out Friday afternoon.

On the other hand, Treasury yields resumed their upward climb last week after falling in late January (see more below). While some analysts think the 10-year yield would have to climb roughly another 80 basis points to really start weighing on stocks, it may not be a coincidence that large growth stocks in Tech—which tend to be more rate sensitive—had some tough sledding Friday. Two of the biggest behemoths, Apple (NASDAQ:AAPL) and Microsoft (NASDAQ:MSFT), didn’t participate in the rally.

The biggest chunk of earnings season is behind us, and so far, about 80% of S&P 500 companies have beaten Wall Street’s earnings estimates, according to FactSet. That may sound great, but keep in mind that analysts’ projections weren’t much to write home about. They’ve had to keep raising them as actual numbers came in.

What might matter more than earnings is revenue. A company can do lots of stuff to make the bottom line shine, but when it comes to bad revenue, there’s no place to hide. Through late last week, the revenue numbers weren’t amazing, but 75% of companies had done better than analysts projected. Again, we’re dealing with low expectations during the pandemic.

As Barron’s pointed out, however, earnings are actually rising year over year in Q4, not too shabby when you consider that Q4 2020 was during the pandemic and Q4 2019 wasn’t. That speaks to the amazing resilience of so many companies, but also to the way big Tech and Communications Services firms have been able to take advantage of the “stay at home” economy to grow faster than many had expected.

So far, Tech and Health Care are doing the best this earnings season, with Energy and Industrial firms trailing the pack.=

The earnings parade slows a bit this week but it’s far from over. Some of the firms we’re expecting to hear from include Twitter (NYSE:TWTR), Coca-Cola, PepsiCo (NASDAQ:PEP), Kraft Heinz (NASDAQ:KHC), GM, Uber (NYSE:UBER), AstraZeneca (NASDAQ:AZN) and DIS. As usual, investors will likely be paying just as much attention to executives’ outlooks as they do to the top and bottom lines.

On the data side, this week brings consumer price index data and University of Michigan sentiment. In the past, a tepid jobs report like Friday’s might have boosted the market by keeping concerns of a rate hike off the table. It feels like a long time since we had that kind of thinking following a jobs report, simply because the Fed has promised to keep rates near zero for years to come.

Speaking of the Fed, it’s front and center this Wednesday when Fed Chairman Jerome Powell is scheduled to speak on “The State of the U.S. Labor Market” as part of an Economic Club of New York webinar. That presentation will be broadcast live. 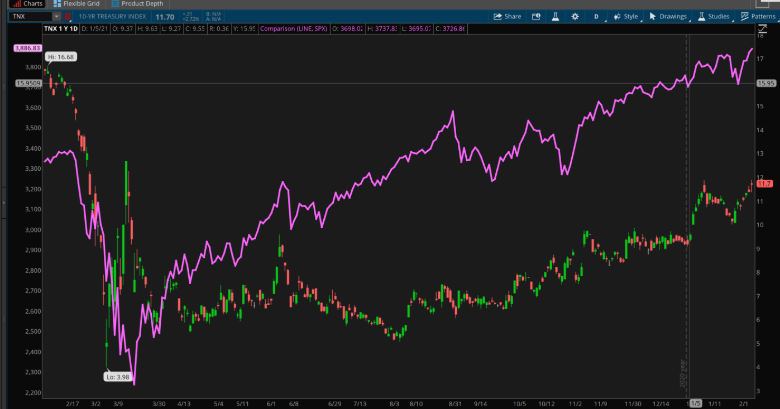 CHART OF THE DAY: HALFWAY BACK. The 10-year Treasury yield (TNX—candlestick) resumed climbing last week after a short break, and is now about halfway back to where it was pre-COVID a year ago, as this one-year chart shows. During that same time period, the S&P 500 Index (SPX—purple line) has surpassed the early 2020 highs, but rising yields could pose a threat to more gains. Data Sources: Cboe, S&P Dow Jones Indices. Chart source: The thinkorswim® platform from TD Ameritrade (NASDAQ:AMTD). For illustrative purposes only. Past performance does not guarantee future results.

Rising Costs: Despite Friday’s soft employment data, bonds continued to decline as the old week ended. The 30-year bond yield came within striking distance of 2% by early Monday at 1.99%. If nothing else, this may get people a little concerned about possible rising mortgage rates, which would be a double-whammy for home buyers already facing the highest prices ever. The last time the 30-year yield topped 2% was nearly a year ago, last Feb. 19. Even that pre-pandemic yield was down sharply from a peak of 3.46% in November 2018.

If there is inflation concern in the market, it could come from the commodities. Crude has done nothing but climb so far this year, and the metals complex is also starting to shine (aside from gold). Copper—an important industrial metal used in all sorts of products—is trading at levels last seen in 2012. You can’t necessarily rule out commodity inflation spoiling the party stocks are throwing.

Buying Ink By The Barrel: The New York Times reported earnings last week and shared a pretty amazing statistic: Subscribership keeps rising and recently hit 7.5 million. The paper’s management has a goal of 10 million subscribers by 2025. Go back about 20 years and you would have found lots of armchair experts telling you newspapers were a dead business due to the rise of the internet. In a way, they had a point. Thousands of small local newspapers have gone out of business, and that’s a shame. At the same time, big guys like NYT and the Wall Street Journal keep racking up new readers with their online platforms. It looks like this accelerated over the last year, partly due to the pandemic and the election. NYT added 2.3 million subscribers last year, its most ever.

What this tells you is that it’s not just retailers that found ways to thrive using the internet. Newspapers are another sector that changed their focus, and also benefited from the rise of smartphones that allowed people to take the newspaper anywhere they went—something industry experts probably didn’t calculate into their dire predictions of the early 2000s. The newspaper industry, like retail, did what successful businesses do, adapting to new times and new technologies. The negatives? Advertising continues to be a challenge, the NYT said, especially on the print side, where the pandemic took a bite. Adjusted operating profit rose just 0.9% last year. The question is can the company continue to grow profit if advertisers keep leaving? Raising subscription prices is one tactic.

Jobs Report Riddle: One conundrum about last Friday’s payrolls report was the reversal in job gains for construction and manufacturing. It’s not just that both fell in January after eight months of rising. It’s also that the declines came when other data show signs of a robust manufacturing and housing picture, which you normally think would raise job growth in those areas. For instance, the closely watched ISM manufacturing data released last week showed continued expansion, while December construction spending also looked pretty good. There’s actually a shortage of new housing, causing prices to rise. That’s typically a good recipe for construction job growth to pick up. Maybe it will. It’s always possible the January report was an outlier or didn’t pick up all the data. It’s a long time until March, but it should be interesting to look when the next payrolls report runs and see if the Labor Department tinkers with any numbers from January, or if February’s data show a rebound in these two sectors.