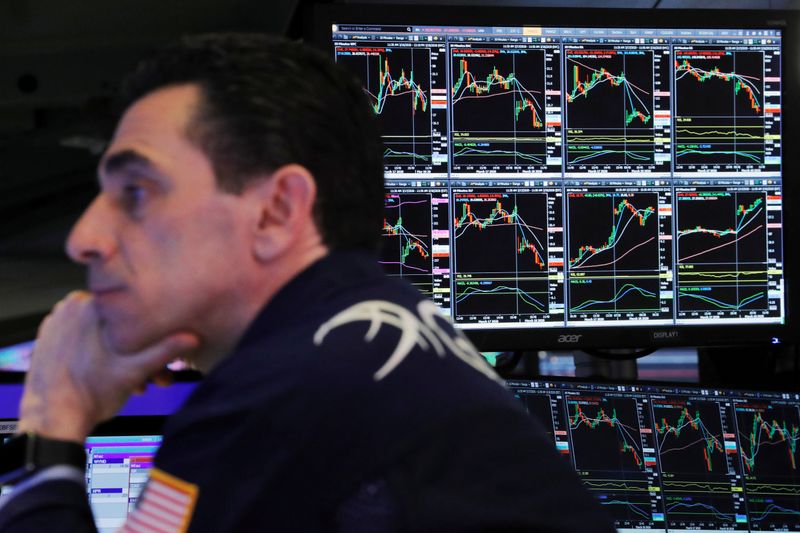 © Reuters. FILE PHOTO: A trader at the New York Stock Exchange works as markets continue to react to the coronavirus disease (COVID-19) inside of the NYSE in New York

(Reuters) – The average hedge fund underperformed the wider stock market in 2020 but saw less volatility while stock-picking funds got a lift from technology and stay-at-home shares in a year beset by a pandemic and uncertainty around the U.S. election.

Hedge funds, which aim to protect assets in market downturns and have faced criticism for many years for high fees and lacklustre returns, in 2020 showed a divergence in performance.

The average hedge fund made 7.3% in the first 11 months of the year. That underperformed an index tracking the S&P 500, which would have made 14% over the same time frame, according to data from Hedge Fund Research (HFR).

Investors said the performance was still solid given that many of the hedge funds in their portfolios had produced double-digit returns or otherwise preserved assets during the March rut when fears about coronavirus wiped $5 trillion from U.S. stocks.

"Hedge funds broadly managed the year up to March really well – certainly much better than 2008 as a comparison – and they have ended in positive territory," said Robert Sears, chief investment officer at Capital Generation Partners.

The standouts were long-short hedge funds, which proved to have the top-performing strategy. So-called 'long-short' hedge funds, which take bets on stocks rising and falling, raked in gains of 12% over the period, according to recent data from HFR. While that underperformed the broader market, a number of individual firms blasted past that number with high returns.

“On average, hedge funds have done quite well," said Cedric Fontanille, director and head of investment mandates at investment manager Unigestion. "Long-short equity benefited from the strong momentum of their tech exposure. They had quite a bit at the beginning of the year and maintained it."

Many hedge funds were heavily invested in stocks that benefited from consumers and workers staying at home during the pandemic, including Zoom Video Communications (NASDAQ:ZM) Inc and Amazon.com Inc (NASDAQ:AMZN).

UK-based Marshall Wace was among the hedge funds to hold a position in Zoom, U.S. filings compiled by Symmetric.io showed. It made 9.4% in its $20 billion strategy for the year to start of December, said a source with knowledge of the firm.

Among the long-short hedge funds to generate double-digit returns were RiverPark Advisors' $391 million fund, which gained 41.2% through Oct. 31 while Wellington Management's $1.37 billion financials-focused fund gained 21.2% to Nov. 30, according to data gathered by HSBC and seen by Reuters.

Britain's Odey Asset Management made 37.3% through Nov. 30 in its long-short fund managed by James Hanbury while Sandler Capital Management's $2 billion equities fund made 10.8% between the start of the year and Dec. 4, sources close to the firms told Reuters.

Hedge fund peers that bet on mergers and acquisitions made 5.4% over the same period while strategies that invest based on macroeconomic trends made 1.4%, the data showed.

While macro hedge funds generated lower gains on average, according to the HFR data, investors said the strategies in their portfolios had outperformed the market.

"A lot of the old guard performers did well again and most macro managers have ended with a good year," said Sears at Capital Generation Partners.

"Even the ones that didn't do quite so well earlier in the year have done well in the later year rally."

Billionaire Alan Howard’s hedge fund firm made 24% in 2020 to Nov 30 in its $4.3 billion macro master strategy, a source close to the firm told Reuters.

All of the hedge funds declined to comment on their performance or did not respond to requests for comment.