The global coffee-chain operator, Starbucks (NASDAQ:), proved to be a great bet during the pandemic. Its shares have not only recovered from last year’s losses, but they also massively outperformed other global food chains.

This remarkable turnaround comes after a severe blow to its business as COVID-19 spread globally, forcing offices to close and daily customers to stay at home. In the most , global, same-store sales, a key gauge of restaurant success, dropped 5%, which is more than what analysts were expecting.

Despite this uneven recovery in sales and a still-raging pandemic in many parts of the world, a strong rebound in Starbucks shares suggests investors believe the worst is over for the Seattle-based company.

As shares hover near an all-time high, it’s reasonable to question whether this stock is still a buy. Could it be that much of the good news has already priced in? 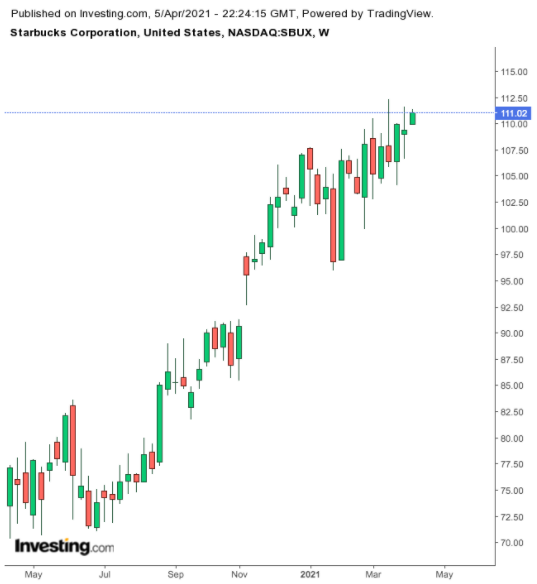 Many analysts believe Starbucks is back on a growth path after a tumultuous year as the reopening in its two biggest markets, the U.S. and China, will bring back sales and expansion in profit margins. These markets together make up 61% of the company’s global portfolio, with 15,340 and 4,863 stores, respectively.

Sales are forecast to grow 21% this year, to a record $28.5 billion. Analysts also see a 142% recovery in earnings to $2.83 a share. In 2022, they forecast another 22% growth in earnings. If the reopening of the global economy remains on track, these projections could even prove to be conservative.

According to a recent note by analysts at BMO, Starbucks has the potential to outperform the current market expectations as the global economic reopening accelerates. The note said:

“We view SBUX as a reopening beneficiary with meaningful potential upside to FY21/FY22 consensus, partly driven by comp contributions from sales transfer due to the U.S. asset base transformation, accelerating digital momentum, easing competitive dynamics in China and steeper margin recovery.”

Another reason that could fuel more gains in Starbucks is the company’s aggressive push to restructure its business. The pandemic has forced it to rethink its central concept as a “third place” away from work and home where customers can relax. It now plans to accelerate the rollout of its “pickup” store concept, with smaller-format locations that don’t have customer seating. In the U.S., Starbucks is closing about 800 underperforming locations and building new store formats, like urban cafés without seating and more drive-thru lanes in the suburbs.

Over the long run, the chain is planning to build more than 20,000 additional locations in the next decade to meet its goal of reaching 55,000 locations by fiscal 2030, up from nearly 33,000 today.

“We are well positioned to invest in the right areas to strengthen our competitive advantage and drive consistent, sustainable growth for decades to come,” Chief Executive Officer Kevin Johnson told investors in December.

Starbucks may not have more upside in the short run after a power run during the past 12 months, but we believe the stock is a good buy-the-dip trade due to its long-term growth potential.

The company, with an annual dividend yield of 1.63%, pays $0.45 a share quarterly, making it a suitable candidate for income-seeking investors. Its payout has grown about 18% per year during the past three years, highlighting management’s strong focus on returning capital to stakeholders.