This article was written exclusively for Investing.com

Starbucks (NASDAQ:) is the most successful coffee chain worldwide. In 2020, the company had 32,646 stores. There were more Starbucks venues outside the United States than in the country in which it’s headquartered. In the US, there were 15,328 Starbucks, with 17,318 spread in countries throughout the world.

Seattle, Washington-based Starbucks’ business is all about coffee. The company is the world’s leading coffee bean consumer.

Indeed, coffee and Starbucks are synonymous. The recent rise in prices to a multi-year high at over $2 per pound is likely eating into SBUX’s profits. However, the price action in the shares shows that the company has not suffered from the rising price of its key product.

Coffee reached the highest price since 2014 in July 2021, when SBUX shares hit another record high. While it may be intuitive to believe that higher coffee prices will weigh on SBUX shares, the company will likely pass the costs to its massive customer base.

Coffee prices exploded to the highest price in years in July on the back of rising inflationary pressures and weather and currency developments in Brazil, the world’s leading producer and exporter of coffee beans.

The chart above highlights the ascent of ICE coffee futures that took the price to a high of $2.1520 per pound in July, the highest level since October 2014 when they peaked at $2.2525 per pound.

Coffee experienced quite a comeback as the price more than doubled from the June 2020, 92.70 cents low. In Brazil’s top coffee-growing areas, a frost pushed the price to over $2 per pound for the first time in nearly seven years. Meanwhile, the rise in the versus the US dollar increased local production costs, putting upside pressure on coffee futures since the mid-2020 low.

The nearby December coffee futures contract was trading at just over the $1.90 per pound level on Friday, Sept. 3.

Because coffee beans are the primary product the company offers, Starbucks is a massive coffee consumer. Since the stock market reached a bottom in March 2020, SBUX shares have been trending steadily higher. 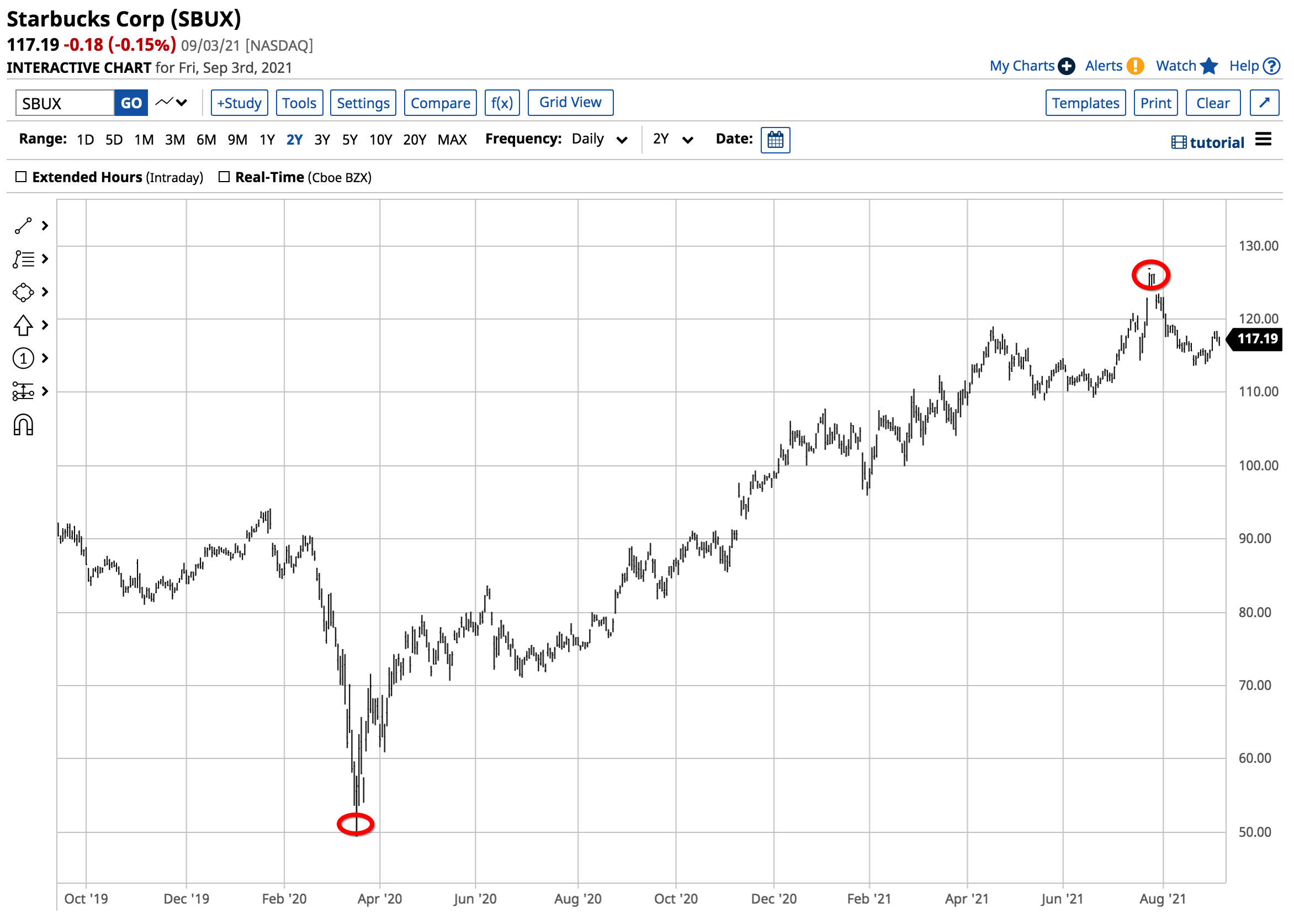 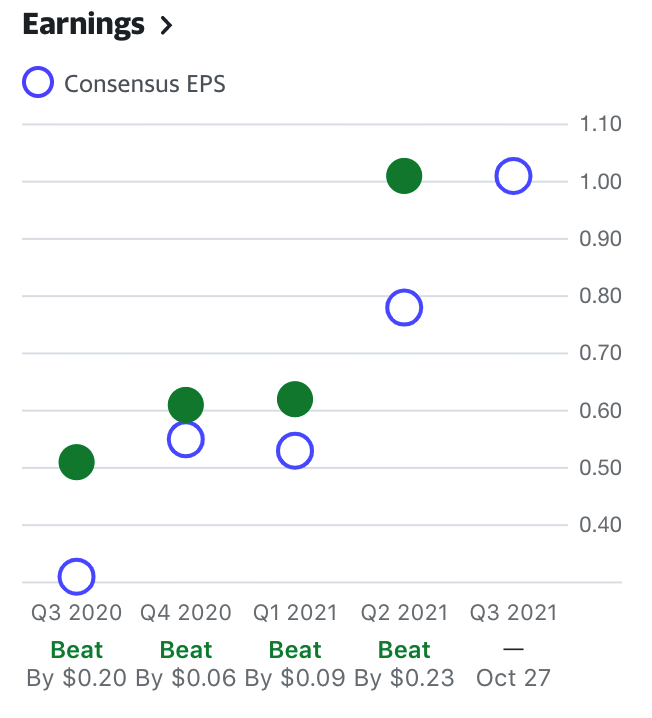 The chart highlights SBUX has exceeded consensus earnings projections over the past four consecutive quarters. In Q2 2021, the company earned $1.01 per share, 23 cents better than the market had expected.

The cost of goods sold increases for the company

Rising coffee prices are an expense for SBUX and other coffee consumers. Coffee beans are a significant cost-of-goods-sold issue for the company.

While the recent explosive move in coffee to over $2 per pound has not impacted earnings, a continuation of price appreciation in the soft commodity could weigh on the company’s share price.

The last substantial bull market in coffee futures began in 2008 during the global financial crisis and peaked in 2011.

As the monthly chart highlights, the inflation environment in the wake of the 2008 worldwide financial crisis lifted Arabica coffee futures from a low of $1.0170 per pound in December 2008 to a high of $3.0625 in May 2011. The commodity’s price has tripled in two and one-half years.

The only difference in the central bank’s and government’s approach to the global pandemic and the 2008 crisis was that in 2020, monetary and fiscal stimulus levels have been far higher. Albert Einstein once said the definition of insanity is doing the same thing repeatedly and expecting a different result. The monetary and fiscal policy initiatives since March 2020 have ignited an inflationary fuse.

Coffee futures tripled in value from 2008 through 2011. The recent move to $2.1520 per pound could be the beginning of a rally that will last for the coming years.

Meanwhile, the coffee futures market has experienced an almost perfect bullish storm. With other commodity prices rising, Brazil’s currency has been trending higher, increasing production costs. The recent frost is likely to put downward pressure on supplies. Moreover, as COVID-19 and its variants continue to rage in Brazil, supply chain issues have developed, making it more expensive and challenging to transport the beans.

Companies will pass along higher costs to consumers; SBUX remains in a bullish trend

The path of least resistance for coffee futures and SBUX shares remains bullish. Time will tell if rising coffee prices begin to weigh on Starbucks’ earnings and the company’s share price. However, inflationary pressures are eroding money’s value and lifting the prices of all assets.

Starbucks will pass along the increase in coffee prices to its loyal customer base. With costs rising for all consumer goods, SBUX is just another company that will raise prices. The cup of Starbucks coffee is not all that elastic as the company offers its customers the product along with an environment, which should soften the blow of rising coffee prices.

Inflation is seeping through to all goods, services, and asset prices. SBUX shares are likely to follow the overall stock market, which remains in a bullish trend, rather than the wholesale coffee price. The primary danger to SBUX is a correction in the stock market since it will pass higher coffee prices along to its loyal customers.