How long can small-cap value stocks outperform the rest of the factor field? According to the influential Fama-French research, this slice of US equity risk has dominated performance over the long haul. In recent years, however, the long-run record faltered as growth and large-cap led. But small-cap value is back in 2021 and for the moment, at least, is well ahead in the equity factor horse race on a year-to-date basis.

Small-cap value’s year-to-date leadership was conspicuous a month ago and these stocks continue to hold the lead in 2021, based on a set of proxy ETFs in this space. The iShares S&P Small-Cap 600 Value ETF (NYSE:) is up a strong 24.5% this year through yesterday’s close (Apr. 7). Although the fund’s red-hot run has cooled lately, the trend still looks bullish. 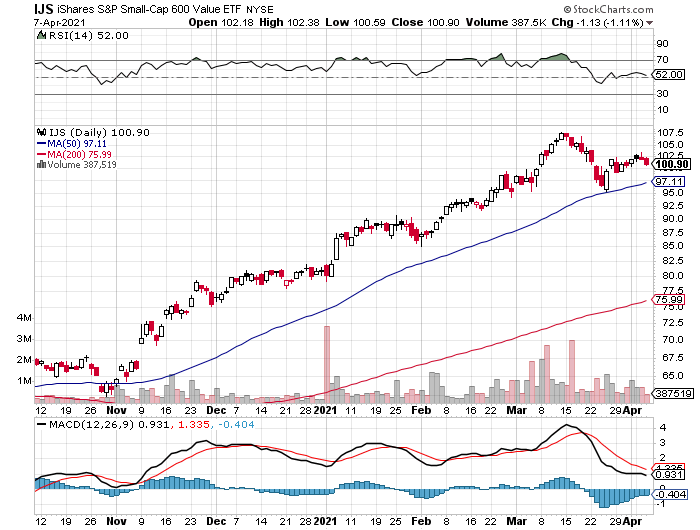 In relative terms, too, IJS is holding on to a solid lead. The runner-up performer: iShares S&P Mid-Cap 400 Value ETF (NYSE:), which is trailing IJS with a 20.4% year-to-date gain.

Performances for the remaining factor ETFs fall away quickly from IJS’s lead. Although all the major risk factors are posting gains in 2021, results vary widely. The softest year-to-date gain: momentum via iShares MSCI USA Momentum Factor ETF (NYSE:), which is up a modest 3.4% this year. 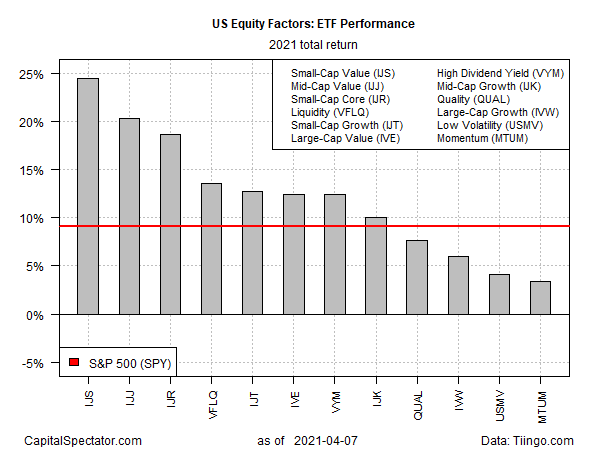 Note, too, that IJS also enjoys a hefty return premium over the broad market benchmark via SPDR® S&P 500 (NYSE:), which is up 12.5% year to date—roughly half the gain for small-cap value.

What explains the revival in the formerly long-suffering small-cap value realm? One narrative is that the Biden administration’s focus on ramping up stimulus spending is a catalyst. Or at least that was the thinking for explaining first-quarter results. As Reuters reported earlier this month:

“The Biden administration’s $1.9 trillion stimulus plan and expectations of rising inflation helped bolster the performance of fund managers who made bets on economically-sensitive cyclical or small-cap companies in the first quarter of the year, Morningstar data showed.”

For the moment, the recent rise in the benchmark Treasury yield has paused. It’s unclear if this is a near-term top for rates or just a temporary hiatus ahead of another run higher. Next week’s March report on consumer inflation could be a key factor that plays into what happens next. 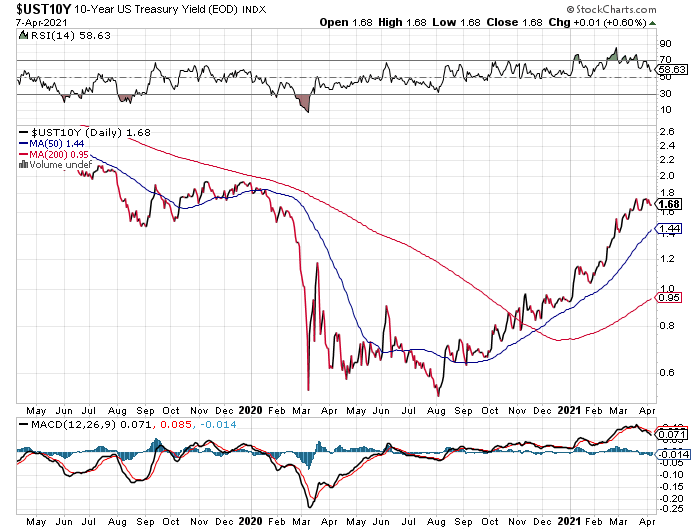 Economists are expecting that the headline Consumer Price Index () will accelerate to a 2.4% year-over-year rate (vs. 1.7% in February), based on the consensus forecast via TradingEconomics.com. In turn, that outlook suggests that a new leg up for the 10-year may be brewing. On that basis, in context with Rosenbluth’s analysis, small-cap value could face a revival in competition from large caps and growth stocks in the weeks ahead.