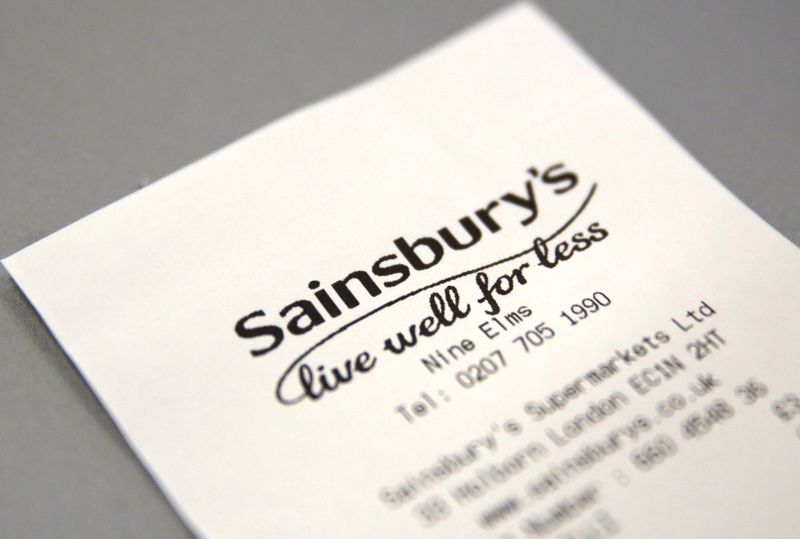 © Reuters. FILE PHOTO: A discarded till receipt lies on a table at a Sainsbury's store in London 2/2

LONDON (Reuters) – Sainsbury's and Aldi will forgo UK property tax relief during the pandemic, following rivals Tesco (OTC:TSCDY) and Morrisons and taking the total saved by the government from supermarkets to 1.4 billion pounds ($1.9 billion).

In March, the UK government and devolved administrations exempted all retailers from paying the tax on their stores for the 2020/21 financial year to help them through the crisis.

Britain's supermarkets have performed well during the pandemic, but have been criticised by lawmakers and media for paying shareholder dividends while receiving tax relief.

However, on Wednesday, Tesco said it would repay the 585 million pounds it had claimed because some of the risks of the crisis were now behind it, and returning the money was "the right thing to do."

That stance put pressure on rivals to do the same.

Sainsbury's said sales and profits had been stronger than originally expected, particularly since the start of the second national lockdown in England last month.

"With regional restrictions likely to remain in place for some time, we believe it is now fair and right to forgo the business rates relief," said CEO Simon Roberts.

Analysts said the pressure was now on Walmart-owned Asda and discounter Lidl to do the same. Neither had any immediate comment.

Taking account of the business rates it will now pay, Sainsbury's forecast underlying pretax profit of at least 270 million pounds in its 2020-21 year.

It said the board would prioritise dividend payments to shareholders over net debt reduction in 2020-21.

This will push back its target of reducing net debt by at least 750 million pounds in the three years to March 2022. It now expects to achieve the target by March 2023.

Sainsbury's also repeated its call for the government to review the business rates system to create a more level playing field between physical and online retailers.